By admin14 September 2020No Comments 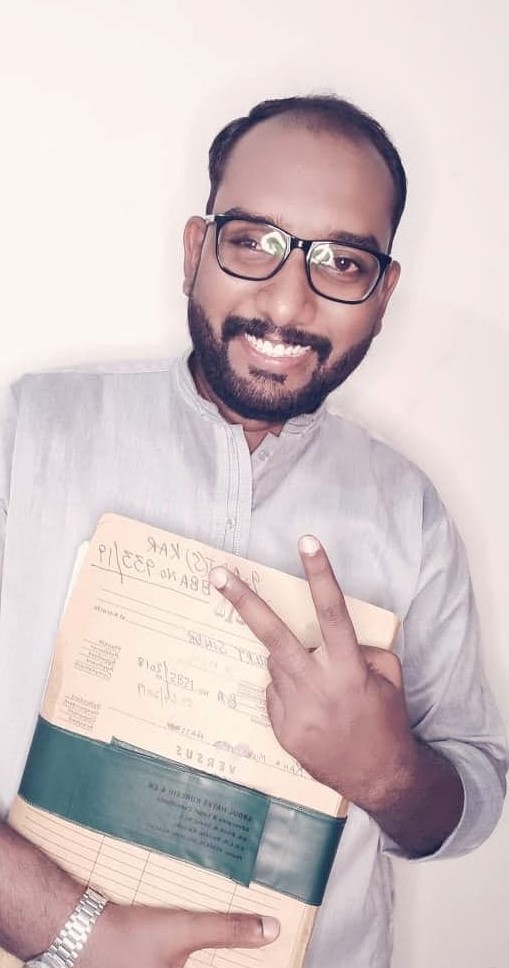 An innocent Christian man who was violently attacked by Muslims  till unconscious and woke hours later in hospital blinded by the attack, has won a two year year battle to clear his name of false allegations of violence. He has also forced the Muslim attacker to pay a substantial amount of compensation thanks to the help of British Asian Christian Association.

Vikram Alvin (27 yrs) was a second year chemical engineering student at  Karachi University a very prestigious establishment, when the attack took place on 18th August 2018 (click here).  The family had been abused for month after they had moved into a 100% Muslim area from Drigh Road to escape land mafia who were persecuting them.  For those of you who have not read previous BACA articles on Drigh Road persecution we briefly explain that the Drigh Road Christian enclave began when Pakistan gained independence.  At the time wealthy churches gave up land in their ownership to enable deprived Pak-Christians to build homes from themselves.  Though these self-made homes are small and dilapidated the land they sit on is prime estate in the city centre of Karachi (Pakistan’s financial capital). Muslim gangs have been killing Christians and persecuting them to scare them away and usurp their land, while other Christians sell before violence becomes untenable. Read more (here) and (here)

While receiving treatment at Aga  Khan Hospital (Pakistan’s top hospital) paid for by BACA he had sight restored to one eye (click here), but they did not have the expertise to repair his right eye.  After a recommendation for treatment at a Turkish hospital BACA funded a trip, but sadly on arrival we were all advised that delays in obtaining a travel visa had rendered the eye beyond repair (click here).

The family began to pursue justice through the courts via a Solicitor funded by BACA.  However the action led to them receiving daily threats and BACA moved the family to a safe house for their protection (click here).  Worse still the wealthy Muslim family who led the attack on Vikram and his brothers filed a false suit of violence by Vikram and his family meaning that BACA had to pay their bail fines and hiked up legal fees.

There were significant delays in the litigation. For six consecutive hearings, the Honourable Judge Rajesh Chander was on holiday leave so the case could not proceed. These unexpected postponements, lawyer strikes based on upset that the legal fraternity was castigated by a doctors fraternity over their being above the law and Pak-army decisions (click here) and the usual lower priority attributed to cases from minority communities.

The agonising delays left Vikram Alvin John and his family prone to threats not to pursue the legal case and demands to accept financial bribes in lieu of punishment under contentious Qisas and Diyat laws.

However, the family supported and counselled by BACA did not cave in to the pressures of the additional legal battle or threats and Honorable Justice Rajesh Chander Rajput, Session Courts, Karachi passed a judgement on 12th September 2020,  acquitting Vikram John, Elvin John, Nasreen Elvin John and Sunil John. Praise God!

“I am glad we are finally acquitted from these obviously false charges, but disappointed that it took so long and caused so much expense to our donors British Asian Christian Association.

“We proudly inform you that we have won the case against Rana Meher Din and the opponent party has come to a comprise which we have now accepted.

“We as a family did not want to continue the legal fight as the process has been draining and as part of the agreement in the compromise the threats to us will end.

“Moreover our God asks us to forgive our enemies and we have done so.

“We hope by taking things this far local Muslims realise that the Christian community has a new voice and is empowered through God and His helpers within BACA.

“My family is extremely grateful to BACA for their wonderful support throughout our two-year-long case.”

Timeline of the case:

18th August 2018: Vikram attacked and rendered unconscious by local Muslim mob for being a Christian. His brothers were also stoned and beaten while trying to save him. Vikram blinded though sight returned to right eye days later.

24th August 2018: The culprits were granted pre arrest bails via application no. 1775/2018 from the court of District Session Judge Karachi East.

21st April 2019: Despite obvious falsification, the culprits were able to influence the police to register a counter F.I.R No. 76/2019 in Mehmood Abad Police Station. After Abdul Samad and others also filed a writ petition in the court of Honorable Justice Rajesh Chander Rajput to take immediate action against Vikram John and family.

1st March 2019:  Vikram informed by doctors at Batigoz Hospital Turkey that his left eye was beyond repair.

In breaking news from the Islamabad Supreme Court: The final verdict has been reserved until…