Spurned Muslim man throws acid over Christian girl then set her alight – now Asma Yaqoob is fighting for her life! 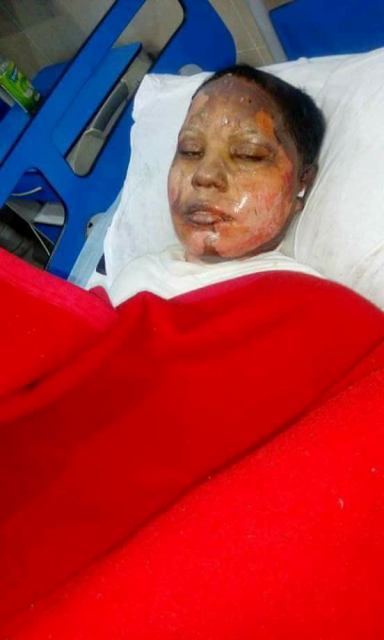 A 25 year old Christian woman in Sialkot, Pakistan who spurned the advances of a Muslim man named Rizwan Gujjar (30 yrs) was the target of a heinous acid attack that has left her disfigured and fighting for her life.

Asma Yacoob has been employed as a  beautician for the last two years and was making a good living due to her expert knowledge and fantastic styling technique.

Her brother Nabeel Yaqoob (23 yrs) worked as a panaflex-maker (banner print-worker) and met Rizwan Gujjar there, over a period of time they became very good friends and Rizwan would often visit Nabeel at his family home. It was during the visits to the Yacoob family home that Rizwan developed his fatal attraction for Asma; a secret desire for her would ultimately ended in violence.

Asma was friendly to Rizwan because he was her brother’s close friend, but 3 months ago when Rizwan attempted to take their acquaintance further by directly proposing that Asma marry him, she recoiled and refused his advances. However, she did not shame him by reporting the misstep to her family out of concern her brother would be angered by his friends impropriety and come to danger.

Rizwan then adopted a very harsh attitude with Asma and unable to control his feeling of inadequacy he plotted to attack her for the slight he felt. In the meantime Asma also became increasingly uncomfortable with the weird behaviour that Rizwan began to display, ignoring and avoiding him whenever he came to the family home.

On 10th April Asma left her home to provide her beautician services to a bride in Pak Pura town, Sialkot. Around 11pm while she was preparing hairstyles for a number of women, she was told by a member of the brides family that her brother had arrived at the venue and was seeking her attention.

Not expecting any problems she walked up to the courtyard gate to meet her brother, but found Rizwan was there instead having used her brother’s name as a pretext to meet with her.

Rizwan did not wait a moment and with a quick reflex covered Asma with large amounts of acid, he then lit the flammable solution so that Asma began to burn, and fled the scene of the attack. Asma screamed as a sharp pain and flames engulfed her but the bride’s family put out the flames and took Asma rapidly to the nearby Civil Hospital.

At Civil Hospital Asma’s family were told that Asma had little chance for survival because she had suffered 90% burns and the hospital had no special burns unit. Clinging to life and travelling hundreds of kilometres in an ambulance Asma was taken to Mayo Hospital, Lahore.

By some miracle the young woman has survived and has been admitted to Mayo Hospital for 10 days now.  She is recovering slowly and will be kept in hospital for some time yet as doctors fear even the slightest infection will terminate her frail life.

Asma’s family had lodged an FIR in Haji Pura Police Station on the day of the incident and police arrested  Rizwan the very next day.  The police seem to be undertaking a proper investigation and it is hoped that Rizwan will be prosecuted but that of course will never help Asma heal from her wounds.

“This depraved attack reveals the low worth of Christian girls in the mindset that has evolved amongst most Muslim men in Pakistan.  Through a biased national curriculum and rogue Imams preaching a special place in heaven for those who rape and convert Christian girls, most of them deem minority women as war-booty.

“A Muslim NGO in 2014 estimated 700 Christians girls are kidnapped, raped and forced into Islamic marriage, but did not take into account the many other crimes Christian women face.

“Even the figure they suggest for the abductions seems extremely low but that is too be expected, as most families do not pursue justice after becoming despondent due to police inactivity when crimes are reported.

“Seeing young Asma in such pain is heart-wrenching for all of us in the West, but the authorities of Pakistan just seem to accept this as the culture of Pakistan. It is this warped belief that has to be reconstructed before we can start to fashion a new more egalitarian nation, however the desire will have to be one driven by the country’s Government – sadly I have never experienced a more selfish bunch of politicians.”

“Acid attacks are a very real threat and have become increasingly frequent across the world over the past few years (click here). Viciously threatening to mar the life of an innocent woman for spurning sexual advances is not something that should be tolerated in a civil society.

“In Pakistan these horrible violations happen so frequently (click here) that there is an organization wholey committed to helping victims of acid attacks (click here), so  we hope that law enforcement will take not only this attack seriously but also the sexual harassment of particularly marginalized groups like religious minorities so such atricioties can be prevented.

“Despite forced marriage being made illegal in 2017 the statistics show that upward of 700 Christian girls are kidnapped, raped and forced into Islamic marriage every year, and this shows no signs of decreasing. (click here) Martial choice, especially for the meager percentage of Pakistani Christians, remains a concern when the risks of refusing marriage proposal from a man with a seemingly higher social standing are so great.

“The Human Rights Commission of Pakistan (HRCP) reports that, 143 women were victims of acid attack or were set on fire in 2017, an action that has unfortunately become a possible response for spurned suitors after having a marriage proposal declined. An another incident happened in Punjab province to 3 Gurat University students just days ago (click here).”

Asma is receiving special medical treatment but has been advised that she will need to get to a private hospital to receive such care.  The family of Asma are seeking assistance to cover the costs of the necessary specialist services.  British Pakistani Christian Association have created an appeal to help with Asma’s ongoing care and treatment. If you would like to contribute you can donate to by clicking (here)

BPCA officer Shahan with mother of Asma, Parveen.  Shahan has being providing counsel and prayers to the family.