UK Christians given workshop on persecution in Pakistan

By admin2 November 2019No Comments 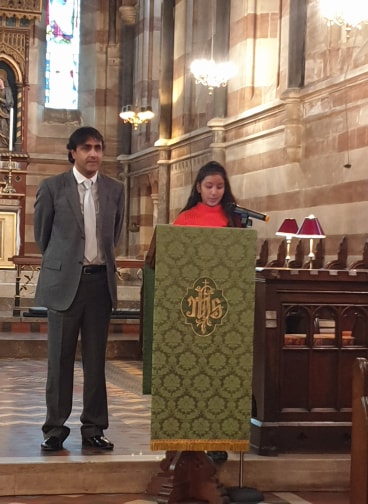 In early October British Asian Christian Association were given the privilege of speaking and holding workshops at an event titled ‘Living Courageously under persecution’.  We used the opportunity to describe the persecution of Christians in South East Asia and similar persecution of Muslim converts in the UK.

The event is an annual event and now in its 3rd year has become quite established.  Though the attendance was small many of those who attended were in senior positions within the church.

Though BPCA has never been involved in workshops before, Hannah Chowdhry, Nissar Hussain and our Missionary Leighton Medley agreed to talk on the varied work of the BPCA and the many issues that we have tackling since our inception.

Leighton Medley who generally travels to Pakistan twice a year leading our outreach program has met personally with many of the persecution survivors we have rescued or assisted in Pakistan.  He was able to share first-hand knowledge of his fears when caught up in Pakistan and having his flights delayed during the riots caused by those wishing for Asia Bibi to be hanged.  He has also met several Christian teenagers who had been abducted, raped and forced into Islamic marriage, blasphemy accused and their families and bomb survivors.  Moreover, Leighton has experienced the abject poverty the majority of Christians suffer even having met with enslaved Christians in the brick kilns of Pakistan.

He was able to share accounts of bravery from strong-willed faithful Christians who had overcome a whole manner of evils against them yet found the resolve to restart their lives without hate. No more than Sherish and Farzana who have put behind them the brutal attack that threatened to consume their passion for life, but ended up strengthening their faith (click here)

“It was great to be a part of an event that was so powerful.

“Prayerful people gathered together and listened attentively to the accounts that I shared.

“Their input into discussions suggested they really cared about their brothers and sisters in Pakistan which was heart-warming.

“A common-theme was a perceived lack of knowledge of the suffering of Christians across the globe and being able to expand their learning of such was rewarding.”

Nissar Hussain, spoke of the persecution he faced in Bradford and similarly a large number of Muslim converts across the UK.

He explained how statutory agencies fail to recognise the crime of apostasy hatred and often list it as a neighbourhood dispute rather than hate crime, unaware of the Hadith Islamic scripture calling for death of those who quit Islam.  Police surmise that as other Christians are not affected by the persecution that apostates face that the violence that converts face is simply a personal hatred.  He referred to the BPCA report on hate crime (click here) and one on Islamophobia (click here) that were submitted  for Home Office Inquiries.  These reports call for various policy, practice and legal changes to make the lives of apostates in the UK safer.

Nissar shared examples such as the non-conviction of vile rant taxi driver Zaheer Hussain from Preston (click here) and the surprising persecution of Faisal Bashir  in the usually more cosmopolitan region of London (click here) as examples.  He also explained how failure to respond has meant that other assumed converts like Pakistani Christian Tajamal Amar have been targeted by extremists (click here).

A plea was made for churches to ensure they are more welcoming to converts. Nissar explained that convert families lose all previous community, friendship and family ties and become severed when sharing details of their conversion. He gave as an example some of the difficulties his family faced and explained that churches do not always offer adequate support – resulting in a feeling of betrayal by many isolated converts.

“Converts from Islam to any faith or no faith face extreme persecution in the UK.

“Police authorities often fail to translate law to help these persecuted individuals or simply do not understand the concern well enough.

“Statutory services must improve to protect these people, laws need to be adapted to improve protection for them.

“Above all there must be a more loving approach from the church to prevent Christian converts becoming completely isolated – God calls us to love our neighbour.”

Hannah Chowdhry took notes at the event and was to round-up conclusions made from participant feedback, however when one of the participants offered to share a testimony of how the workshops had moved her to pray and do more for the persecuted church, BACA were pleased to allow her to end the joint session post-workshops.

The main conclusions from the event were as follows:

Persistence pays off; are we persistent in prayer, in our requests during our trials and suffering. Do we have faith?