By admin18 October 2018No Comments 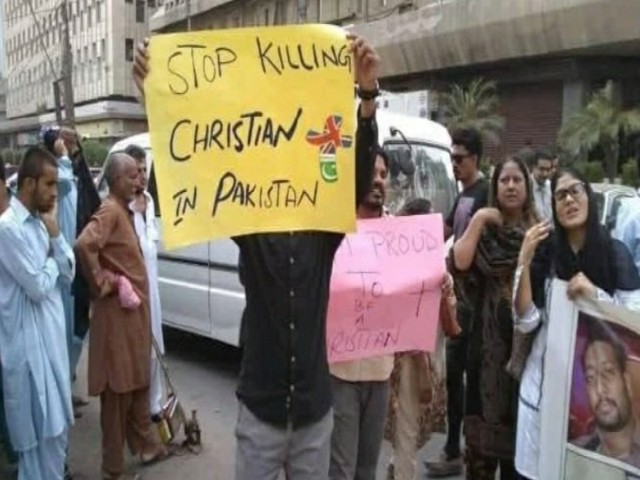 In Karachi on the 18th October at 11am a protest was held to demand Justice for Vikram Masih who was beaten till blind by Muslim men outraged that Christians were living in their previously entirely Muslim community. The protest was organised to demand justice for the family from Prime Minister Imran Khan, Chief Justice Saqib Nisar and other political and legal powers.

The protest was organised by the father of Vikram, named Alvin Masih who brought together several groups who have been offering help. The main participants were the British Pakistani Christian Association, the school children of Saint Lawrence School, Karachi the National Commission for Justice and Peace other human rights organisations.

Human Rights Activists British Pakistani Christian Association representative Irfan Masih and Ghazala Shafique were in attendance.
The protest was held for 2 hours in front of the Karachi press club and an estimated 70-80 people participated all calling for justice and immediate help for the family in the face of excessive threats towards them.

During the demonstration slogans were chanted, such as: Justice for Vikram, Protection for the Grieving Family, Stop Killing Christian People, Christians are part of Pakistan and various others with similar sentiments.

BPCA Lead Officer, Mehwish Bhatti, who has been working with the family and has secured them a safe house, said:
“It is saddening to hear that so far the legal process has been stalled and the family are no closer to justice than before. The protest was organised to stimulate a better response for the family as the police and judiciary seem disinterested in their claim.

“To speed up the process BPCA has paid an instalment for a a solicitor who will now help to expedite the case for Alvin Masih and his family.”

“I travel to Turkey this week in order to pay the deposit for the eye transplant required for Vikram Masih and am praying for success. We are alarmed that the judicial process of Pakistan has been exposed again as biased against vulnerable Christian complainants.

“We continue to pray for this family and have supported them with a safe home away from the threats and brutality of some of their intolerant Muslim neighbours.

“The hatred they face is not self-induced but simply for their adherence to the Christian faith and there is impunity for those who attack them
“Unless Pakistan begins to defend vulnerable minorities through improved laws and more effective statutory agency response, such incidents will proliferate and grow in intensity.

“It should be noted however, that despite international rebuke and consecutively elected democratic governments for the first time in the nation’s history, the situation seems to be worsening rather than improving.

“It would seem that previous governments simply did not have the appetite for change – we can only pray and hope that Imran Khan and his regime proves to be different.”

A Christian charity has called for stronger focus on helping the homeless cope with COVID-19,…