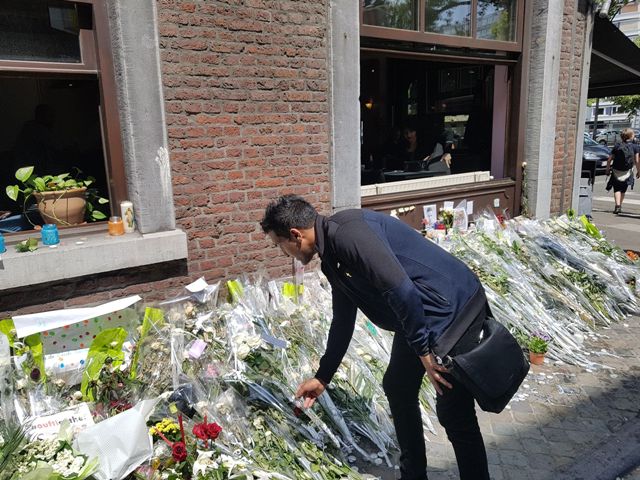 Whilst on a trip to Belgium to speak at a symposium titled “Religious Freedom in Europe: A Christian Case Study” Chairman of the British Pakistani Christian Association and Nissar Hussain visited the site of the recent Liege attack in which 3 police officers were killed by an islamic extremist.

The attack which occurred on Tuesday 29th May was undertaken by a lone-wolf attacker named Benjamin Herman  (33yrs) who was on a day release from prison despite police and prison authorities knowing that he had become seriously radicalised within jail. Two police officers were shot dead and a woman in a vehicle passing-by before the gunman who had shouted Allah-hu-akbar (god is greatest) before his rampage, grabbed a hostage and hid in a local school which had to be evacuated.

When the gunman discovered that the woman was a Muslim on Ramadan he let her go before police authorities finally managed to shoot him dead.

During the symposium Wilson Chowdhry and Nissar spoke of the growing attacks on Christians in both the UK and amongst asylum seekers across Europe, as the continent struggles to cope with the growing radicalisation of Muslims across the globe, but most alarmingly within their own communities.  Read more about the symposium (here)

Mr Chowdhry spoke about the visit to Liege, he said:

“Walking through Liege was a very eerie experience only the day before our arrival  on 3rd June 2018 thousands of people had marched in defiance of extremism and in remembrance of the victims.

“I was slightly daunted whilst traversing to our destination – it is hard not to think you will become a vent for the anger and frustration that local people feel when they have been innocently attacked and you look like you could be an adherent to the faith group responsible.

“However the people of Liege were both welcoming and helpful and many showed us the way to the site and helped us with directions to our next point of travel. As a Londoner who shares their chilling experience of having the peace of their community shattered by acts of terror, I can empathize and have a lot of compassion for what they are going through.

“We laid three white roses to remember the dead and prayed for the city of Liege and for solace for all impacted on by the attack before we left.   For us to come out in solidarity was an honour and a privilege but primarily a sign of our support for those who love peace.”

“Radicalisation of criminals in European jails is a known phenomenon. But little seems to be happening to prevent future incidents similar in nature to this attack.  Police and prison authorities across western nations must design robust systems to prevent hate preachers destroying the restorative justice system and becoming a bedding station for extremists. If not all we will see is the development of more sadistic and vicious Islamist attacks by people with the experience and conditioning to be both successful and extremely brutal.”