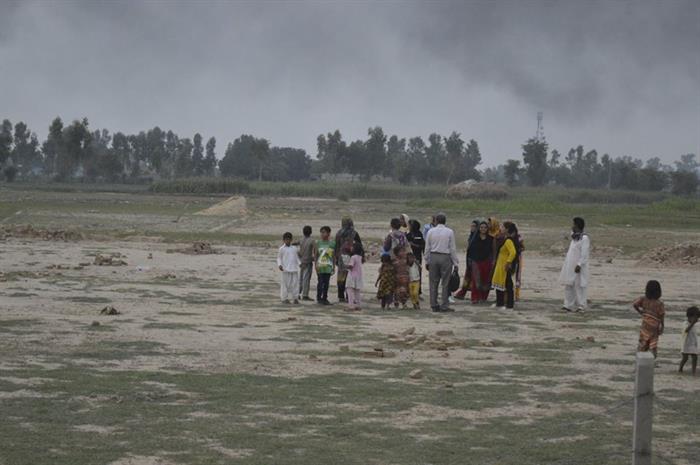 Image taken as BPCA volunteers are about to pray at site of our potential new school for enslaved children – a school that will be the first of its kind!

As midsummer passes and parents and students alike start to anticipate the return of the school year we want to draw your attention to the educational concerns that Pakistani-Christians face. We invite people everywhere to pray for those returning to school and for those who are unable to receive an education due to discriminatory practices they must deal with in Pakistan. These issues include the systemic prejudice taught and embedded in the curriculum, harassment of children and teens while going to and from school (including kidnap, rape and forced Islamic marriage for young girls), as well as while at school. Major societal issues such as indentured slavery and child labour which keeps Pakistani-Christians marginalized and under-educated as children work to pay off family debt also hamper progress for Christians.  The literacy rate among Christian in Pakistan is abysmally low and said to be no more then 7% of their entire population. One report states the figure of literacy amongst Christians is only 3% which underscores the concern about disparity in education.

Some Pakistani-Christians children do get an education, but they may have grave daily concerns about their safety depending on the classroom environment they find themselves in. There has been a rise in bullying and violence against Pak-Christians students in recent years, and this year several that are known to us have succumb to their persecutors and been killed, suffered sexual harassment and subjected to acid attack. Last year on only the third day of his new school school a bright young scholar Sharoon Masih was struck down by his classmates while his teacher watched. (click here). Another Christian,  Arslan Masih was beaten to death by a classmate’s uncle and his colleagues at the police department in a horrible display of brutality after the Grade 8 student resisted his nephew’s bullying. (click here)

Young women walking to and from school are often sexually harassed by Muslim men of all ages, but often they are men much older trying to take advantage of them. Spurning any unwanted advances often does not end well for the targeted girl. The protests against this treatment falls on deaf ears. One man was falsely accused of blasphemy and spent two years in jail before a judge exonerated him, all because he asked some boys to stop harassing his sister-in-law and her friends going to and from school. (click here) Earlier this year BPCA was able to help another girl who had suffered unbearable harassment throughout her entire teen-aged life to retrain and start a new life after relocating due to fearsome threats of acid attack. (click here)

We are also seeing a rise in sexual targeting of young boys as we reported on the rape of a primary school aged boy who was lured to an area on pretense of showing the young child some baby calves. Shamefully the predator’s family attempted to employ Shariah blood money for the violent and predatory assault which his parents bravely refused. (click here)
After other young men felt sour about a boyish cricket match in their neighbourhood, they plotted a scheme to accuse a teenager Patras Masih of blasphemy.  When he lost his phone a month later he was accused again of posting blasphemous material on Facebook. After Patras was charged for the cryptic post on his missing phone the police and religious leaders beat him and sexually abused him and attempted to force his cousin to perform a sex act on him.

Furthermore, those Pakistani-Christians that fall on hard times may find themselves and their progeny indentured indefinitely and though most contracts require enslaved children to begin working at age 13; they often start work much earlier because of the expense of school uniforms and safety concerns.To counter this BPCA has purchased land but has yet to lay the foundation of the Tim Iqbal School for the children of indentured slaves, which has been delayed due to lack of funding. (click here)

Even though child slavery and indentured servitude are illegal in Pakistan via Part II, Chapter 1, Article 11 of the Constitution of Pakistan and the Bonded Labor System (Abolition) Act 1992 respectively, they are commonplace and widely practiced with impunity. We have a short window of opportunity to offer education to these children as in their disenfranchised state they are subject to the labour contract when they reach their teens. Child slaves are also left vulnerable to sexual exploitation such as the two young cousins who were bound while one was sexually assaulted by a co-worker who had been harassing them in the course of their work and who they believe would have murdered them if they had not been found in time. (click here)

School-aged girls are more notably disenfranchised as parents trapped in poverty turn their daughters over to Muslim employers at a vulnerable young age to make money for the family as domestic servants. (click here) They may turn a blind eye while they are abused physically and sexually for a variety of reasons none of which are valid by any stretch of the imagination, but some reports in the media this year also indicate that some “parents” may rather be traffickers. Certainly, in some cases girls are used in this way as beast of burden to provide for the needs of the family, sometimes out of their great need and other times plausibly out of greed. These young ladies should be in school.

“Our school for enslaved children in Pakistan will become a beacon of hope for hundreds of Pakistani Christian brick kiln slaves and of course their offspring.  We hope that if provided a decent level of education we will be able to extricate many families out of the poverty that has destroyed their lives.

“Christians are suffering unbelievable discrimination and persecution in mainstream schools and have not got the means to travel to far locations to deliver their children to school and the result of this is enhanced child labour and continued illiteracy.

“Our school will afford protections to these families and will be cost free.  Moreover we will also be utilising the building to begin only the second church in the whole district of Kasur, no mean feat and one that will end the need for travelling missionaries who meet with families in home once a month or so to provide basic Christian teaching.

“Therefore, the venue will hopefully not only provide good quality education but also bring a spiritual revival and build a community of faithful Christians more informed about the precepts of their faith, giving fortitude as they traverse through the harsh conditions set on minorities living in Pakistan.”

If you wish to send a love offering to improve the quality of education for enslaved children please (click here) and earmark it KASUR SCHOOL PROJECT.

Some participants hold up signs with their messages: 23% to 3% strikes a chord. Where…

Imbecilic bail release of two extremist leaders for ‘poor health’ could be ruse to have Asia Bibi killed!

Getting the next generation into shape