By admin20 December 2017No Comments 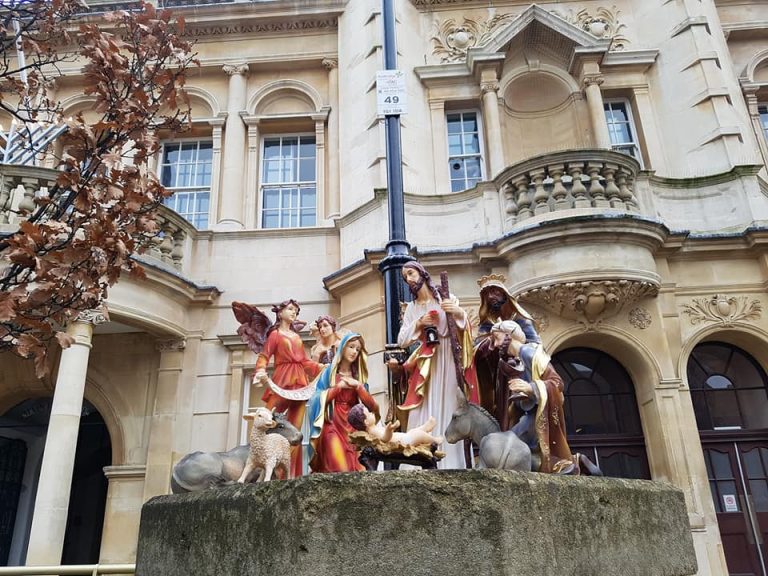 An 11 year campaign to return Jesus to the centre of Christmas celebrations in Ilford were brought to fruition when Wilson Chowdhry, Chairman of the British Pakistani Christian Association, installed a nativity at Ilford Town Hall on Tuesday 19th December 2017.

Residents from Ilford swamped to take pictures of the new hand-painted fibreglass figurines which adorned the left tower of the historic town hall steps.

At every previous attempt Mr Chowdhry was thwarted by Councillors and officials who raised concerns about the nativity being re-vandalised causing clean-up costs to the council and the potential for their own property being damaged.

One previous councillor even went as far as stating that the Nativity was an outdated tradition that no longer had a place in modern society.  However, after a local lay preacher and ex Councillor Lesley Hilton who attends Gants Hill United Reform Church, wrote about a desire for the return of baby Jesus to Ilford (click here), the campaign found new momentum.

Mr Chowdhry seized upon his chance to re-challenge Redbridge Council on their existing position and found that after initial fobbing off and attempts to brush aside his requests, they finally conceded and agreed to allow a return of the nativity.

There decision was no doubt affected by a poll by the Ilford Recorder that had a whopping 969 responses, of which 83% of people desired a return of he Nativity.  Even the Ilford Recorder even listed people of diverse faith and no faith who all desired a return of the ancient Christian tradition. In fact a local Hindu woman donated towards the Nativity after she was moved by the campaign.

The Nativity on the pillar of the town hall steps was later moved to the safety of a gated archway which can be viewed by climbing the stairs. Tonight the nativity will be lit for visitors to enjoy the new Christmas showcase 24 hours a day.

“I cannot express the joy I feel in having finally returned one of Britain’s oldest Christian traditions to our town centre.  For millennia Christians have been creating nativities to display in our town centres and even just 30 years ago, most shops on the high street would have displayed one too.

“Modern culture often marginalises the Christian faith, however here in Redbridge where overall most faith groups and there adherents have a good relationship with one another. The figurines themselves represent people of diverse backgrounds, a shepherd, three Magi from more exotic nations, Joseph, Mary and Jesus and several animals too – it could not be more inclusive!

“As evidenced in the Ilford Recorder Poll, the nativity tradition does not  grate the sensitivities of non-Christians and the majority of people welcome the custom. This speaks volumes about the nature of the harmonious pluralistic community we have in Redbridge – a testament to mankind’s ability to live in peace with one another.

“Children across the borough will have the chance to be involved in helping us place the nativity up every year, and with the help of local schools in future years we hope to make an annually changing Manger for the figurines to emulate a small piece of the Christmas story in Redbridge. I hope schools come forward to enable their children to be involved in a very special Christmas custom that they will no doubt find rewarding.

“Since becoming a father 13 years ago I have always wanted my children to experience this wonderful piece of Christmas story-telling that reminds us of the coming down from a place of perfection by our Lord and Saviour Jesus Christ, who came that those that believe in Him might have eternal life.  This year I got to see the excited look in my children’s eyes a look that makes this achievement so worthwhile.

“Christmas is a time of peace, hope and love and I extend my wishes of joy to all people of Redbridge.”

Food Glorious Food! Photo tour of our Meals for the Homeless service.

If we retaliate as many did in Yohanabad, then we are no better than those who perpetuate acts of persecution against us