By admin15 December 2019No Comments 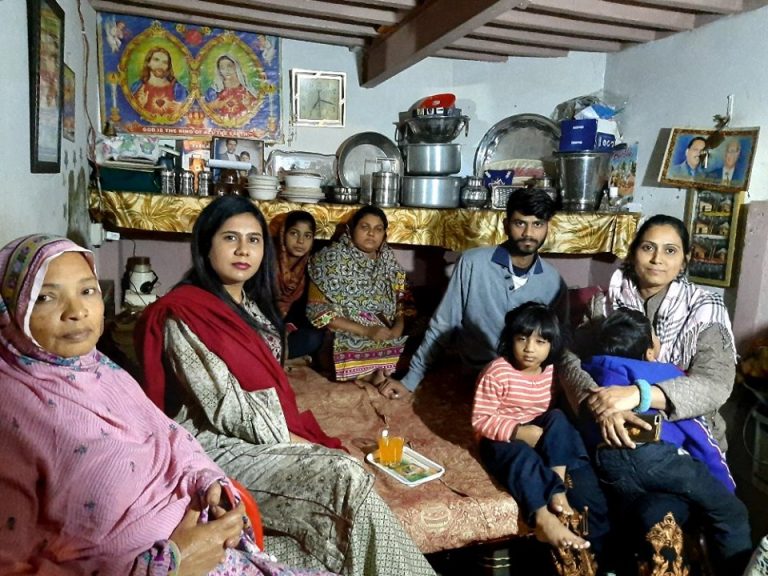 The family of a man who leapt to his death from a burning train say they are devastated and in constant tears over the tragic loss of their beloved husband and breadwinner.

Mehboob Masih, 50, died from his injuries after he jumped escaping flames from adjacent carriages that were engulfed by fire thought to be caused by gas canisters used on portable gas stoves. Read original story (here)

Mr. Masih who worked as a driver was the only provider for his wife and three children who now feel their dream of a better life and chance of an education has been devastated by this tragedy.
The packed train from Karachi to Rawal Pindi, caught fire near the town of Liaquatpur, about 150 kilometres (93 miles) south of the city of Multan on the morning of Thursday 31st October.
Exploding cooking gas canisters were blamed as cooking oil fuelled the fire filling three carriages with toxic thick black smoke and flames killing 74 passengers and injuring 40.
Prime Minister Imran Khan shared his sorrow after and suggested that most of the deaths were the result from passengers jumping from the train and not as a direct consequence of the fire.
Eyewitnesses said that train staff spoke to the family using their stove to cook breakfast and instructed them to stop but he was ignored by them, and they restarted their cooking moments later.
The carrying of portable gas stoves on trains is against safety rules but many poor passengers habitually abuse the lax security to carry cooking stoves on board because of the high cost of food, particularly for long train journeys where hot food is sold at a premium.
Meanwhile a Pakistan Railway spokesperson denied claims the train took 20 minutes to stop saying there was nothing wrong with the trains braking system and insisted it the train stopped within 3 minutes with the emergency response team, consisting of Pakistan railway officers, the army, paramedics, Firefighters and other rescue teams arriving around 10 minutes later.
Minister for Railways Sheikh Rashid Ahmed said “Two cooking stoves blew up. They were cooking, they had (cooking) oil which added fuel to fire”
After the three burning carriages were separated, the rest of the train continued its journey with the remaining shocked passengers.
Mehboob Masih’s family were standing on the crowded train when the fire took hold as they travelled back from the funeral of his paternal uncle in Karachi.
Travelling with him were his paternal aunt Khursheed Bibi (70 yrs), his three cousins Gulzar Masih (51 yrs), Saif Masih (47 yrs), llyas (47 yrs) and another paternal Uncle Zahoor (66 yrs), who all reside in Gujranwala.  All the other family members managed to survive the flames by moving to the front of the train.
Mehwish Bhatti, National Executive of British Pakistani Christian Association in Pakistan,  visited Mehboob’s family in Gulberg Walton Road, Lahore and was told by Mehboob’s wife, Asia (47 years), and her two sons and a daughter that the tragedy has left the family unable to imagine life without their only earning hand.
Asia Masih went on to describe how her husband always provided for his children and would continue to encourage them to study and dream big.
Eldest son Mubashir Mehboob (20 yrs) is studying privately and after the death of his father is now looking for a part time job to support his family.
Speaking to Mehwish Bhatti he said that he misses his father all the time and that that his father was a God-fearing person with a beautiful heart and spent most of his time serving the church after work.  Mehboob Masih has been described as an active member of Full Gospel Assemblies Church Sultan Road. He loved helping others and served the community with full passion.
Mehboob’s other two children are also studying. 18-year-old, Mubeen, is in his first year at college and the youngest, 14-year-old Ruksar, is the 8th grade at City government Girl’s High School.
Asia Mehboob shared her feelings with BPCA stating that Mehboob was a loving husband and a responsible dad. She said:

“I now have to depend on God like never before and will never give up Mehboob’s dream of educating our children so that they can escape poverty.

“I am trusting God for all our needs.”

Mehwish Bhatti prayed along with family and the shared the word of God. She believes that we serve a Living God who never leave us and never forsake us.

“A full enquiry of safety on trains must begin and recommendations for change must be implemented immediately.”

BACA paid the costs for Mehboob Masih’s funeral, however, the family need help to pay the ongoing annual school fees for Mubashir £118, Mubeen £147, and Ruksar £4 and BACA have agreed to cover these costs.  If you would like to help us support this family and many others please donate (here).

Mehwish Bhatti  spoke to UCB (United Christian Broadcasting) radio briefing about the situation in Pakistan. A video of the aftermath of the inferno and the interview can be found on this link (click here).

British Asian Christian Association, has written to the Pakistan High Commission in London to express our common grief.

We have also prepared a letter to express our desire for changes to the existing Pakistan Railways protocols regarding safety and the need for a more concerted effort by statutory agencies to eradicate the existing health and safety concerns on the Pakistani railway system.

Consideration of an overhaul of the existing train infrastructure for a more modern railway system commensurate with developments in the 21st century – but this of course would be limited by financial constraints.