By admin1 February 2019No Comments 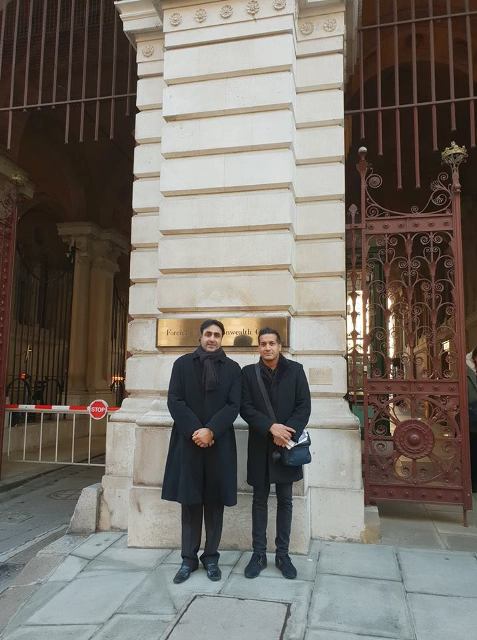 Wilson Chowdhry and Nissar Hussain outside the Foreign and Commonwealth Office building on King Charles Street.

Both BPCA reports described in this article can be bought from our on-line shop (here) from next week.  If you would like to purchase a copy earlier please email admin@britishpakistanichristians.org

In the wake of the landmark Asia Bibi case, the poignant and tragic case of a Pakistani Christian woman who was recently exonerated after ten years incarcerated on erroneous blasphemy charges, a report into global Christian persecution has been commissioned. UK Foreign Secretary, Jeremy Hunt, commissioned the report last month and at a very appropriate time when international discourse and scholarship is poised and receptive to growing evidence of the persecution of Christians.

Wilson Chowdhry, Chairman of the British Pakistani Christian Association (BPCA), and Nissar Hussain (UK apostasy hatred survivor), both attended the launch of the Hunt review into global Christian persecution. A review which will be conducted by the Bishop of Truro, Philip Mountstephen who sent both Pakistani Christians a very exclusive invitation.

According to the NGO Open Doors, one quarter of a billion Christians suffer persecution worldwide – this pervasive Christian hatred occurs throughout the world in countries including Pakistan, Somalia, China and Afghanistan. As can be discerned from Nissar Hussain’s experience who suffered 17 years of persecution in Bradford for declaring his separation from Islam, it is also a phenomenon that is unfortunately occurring in the UK.

In a letter to Foreign Secretary Jeremy Hunt, John Eibner, Chairman of Christian Solidarity International, applauded Hunt’s decision to commence the report observing that “Christianity is on the verge of extinction in its birthplace”, and that the situation of Christians in many other parts of the world is “deeply perilous.” This is a frightening prospect and one that must be met with virulent resistance – minorities must be protected and insulated against attempts to extinguish them. He wrote:

“… I would encourage the Review to address what a British diplomat in Cairo called in 1940 a ‘fixed policy’ of the British Government. That policy was to refrain from raising the issue of anti-Christian discrimination ‘in view of the large number of Moslems in territories under British rule whose sensibilities the British Government would not want to offend’. That policy appears to remain fixed today.

“Another sensitive area that needs to be confronted is the backing of Britain and its allies for violent jihadists and other militantly anti-Christian powers as proxies against adversaries. This policy goes back at least to the beginning of the 19th century, when Britain brought Ibn Saud out of exile and instrumentalised his fanatical “Ikhwan” troops against opponents.

“We have seen the same policy at work in Afghanistan during the Cold War, and most recently in Syria.

“Also, during the Cold War encouragement was given to Saudi Arabia to promote anti-Christian Wahhabism as a barrier to communism. The termination of all such military and ideological programs that fuel the persecution of Christians would be an effective starting point for Whitehall.”

BPCA have published a report about Christian persecution in Pakistan entitled “Call it by its name: Persecution! This report can be purchased electronically from the BPCA website for £5 . A review of the book will soon be available for those who are interested.

“The book severely questions the basis of the Home Office guidance which states that Pakistani Christians ‘are a religious minority who in general suffer discrimination but this is not sufficient to amount to a real risk of persecution”.

“The information provided details the ‘real risk of persecution’ that Christians face every day in Pakistan.

The author, Desmond Fernandes, is a genocide scholar, author of Education, Human Rights Violations in Pakistan and the Scandal involving UNHCR and Christian asylum seekers in Thailand (BPCA: London, 2016, 3rd edition), The Kurdish and Armenian Genocides: From Censorship and Denial to Recognition? (Apec: Stockholm, 2007; Peri: Istanbul, 2013) and several other books and articles, as well as joint-author of The Targeting of Minority ‘Others’ in Pakistan (BPCA: London, 2013) and The Education System in Pakistan: Discrimination and the Targeting of the ‘Other’ (BPCA: London, 2014). They focus on issues relating to educational policies, the criminalisation of communities, genocide and state surveillance and targeting of the ‘Other’.

Formerly a Senior Lecturer in Human Geography and genocide studies at De Montfort University (UK), he is a member of the Campaign Against Criminalising Communities (CAMPACC) and Peace in Kurdistan (PiK) and is an Advisory Council member of the European Union-Turkey Civic Commission (EUTCC). His works have been translated into a number of languages, including French, Dutch, German, Greek, Turkish and Kurdish.

BPCA has also been invited to make submissions to the UK inquiry on Islamophobia. In our submissions we will be highlighting burgeoning apostasy hatred and kaffirophobia – which reveals the flip side of islamophobia and may be contributing to islamophobia and people’s misconceptions of Islam and muslims. In the same way that Islamophobia and mistreatment of muslims should be condemned BPCA argues that mistreatment of ex-muslims and non-muslims should be met with equal reproach and also be admonished. The report on apostasy hatred can be purchased from our website for £2.

It would be interesting to explore the nexus between islamophobia and apostasy hatred – we believe that a thorough study would reveal a close causal relationship between the two. We believe the report would elucidate that increased Kaffirophobia leads to and exacerbates Islamophobia and that the two have to be studied in tandem. Therefore, redressing apostasy hatred and other hatred of non-Muslims by Islamist would inevitably ameliorate Islamophobia and foster greater co-existence between Muslims and non-Muslims.

Moreover, all of this harks to a need to condemn both Islamophobia and equally hatred of non-Muslims by Islamists, two phenomenon which are inextricably linked.

BPCA Chairman Wilson Chowdhry articulates the need for the review as follows:

“BPCA hopes that the  Global Review of Christian Persecution will be used as a tool not just in amending Britain’s current country guidance schema, but as something which can be applicable to other nations.

“We are aware that other nations and even the UN look to the UK for guidance when developing their own domestic policies and thus it is imperative that the fruits of this review nourish the policies of others to ensure that Christian persecution is thwarted at a global level.

“Furthermore, we hope that any recommendations which arise from the review do not catalyse a reversion to the much maligned expansionist/interventionist policies which have invoked a schism between different sects in the Middle East.

“Any interventionist policies must be responsible and accountable and cause greater harmony rather than fuelling disunity in the Middle East which impacts as terrorism in the UK.

“Foreign aid budgets should be designed to assist persecuted minorities especially the common genocide of Christians who are evidently more persecuted than others. Perhaps the review might suggest criteria by which persecution can be measured in a more tangible sense.

“Lastly, the review should also facilitate and foster improved, accountable and more assertive diplomatic relations with nations that have a poor human rights record.”

“The Hunt review is warmly welcomed and endorsed by BPCA.

“I am glad that global Christian persecution is being taken seriously, and we would like the review to also consider the impacts of apostasy hatred/kaffirophobia and how they can be dealt with in the UK.

“We believe that apostasy hatred/kaffirophobia and islamophobia are unequivocally linked and thus by tackling one we feel it will help in remediating the other.”