Learn the Quran and gain 20 extra university credits in Pakistan – what next to keep Christians and others disadvantaged? 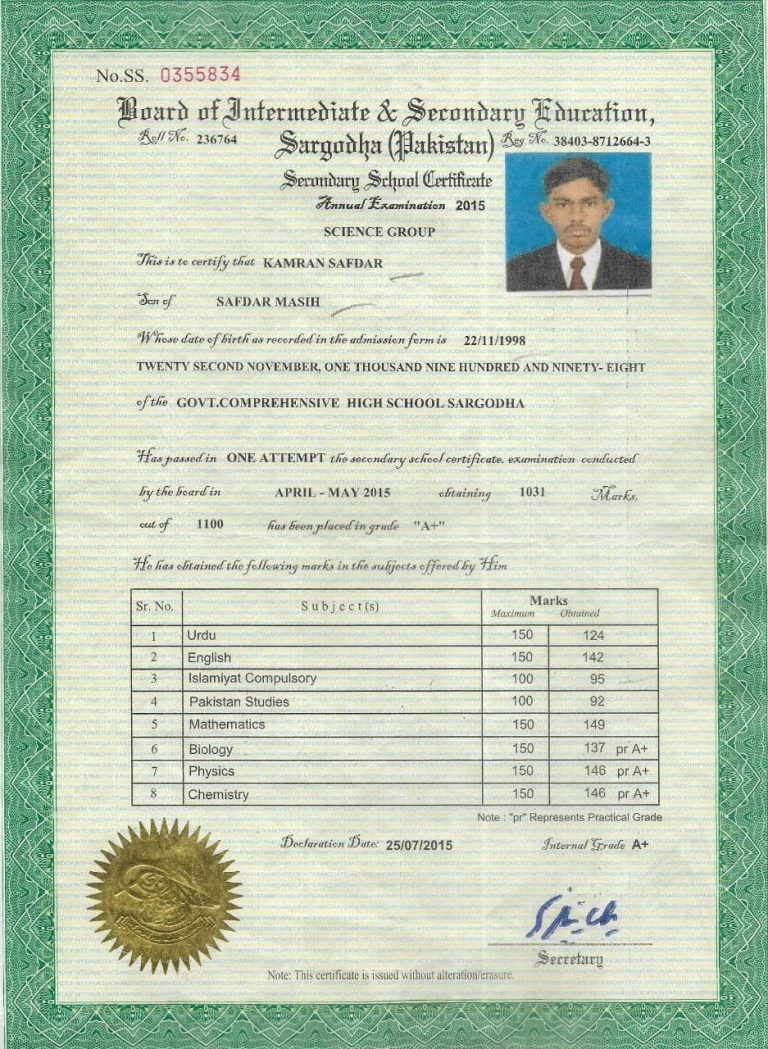 A Christian medical student was denied his place at university despite achieving the required marks.

The son of a fruit hawker from Sargodha, District of Punjab in Pakistan, Kamran Safdar’s ambition of becoming a doctor was shattered despite securing the appropriate entrance level of his chosen medical university with an 89% pass in his intermediate high school exam – even though his fellow Muslim students were accepted on lower grades.

As a result, he was forced to retake the year again, this time attending a private institution, despite the difficulty of affording the 40,000PKR (£200) fee, which he paid using his salary as a Pharmaceutical salesman at a local hospital.

Having narrowly failed to obtain the qualification level by 2 marks on his second attempt, Mr. Safdar tried again the following year in 2019.  The struggle of his whole family, who sacrificed many things to make him accomplish his goals, was met with yet further disappointment when yet again he was short by two percent of the required marks.

Candidates from Hafiz-e-Quran were given an unfair advantage and were allowed a place after being awarded 20 extra marks for memorising the Quran.  A Muslim bias that prevents minority people access to medical roles, adding to the existing disadvantage of poverty and discrimination.

“I left my job 4 months before my exams and went the extra mile, starting my day at 6:00 am and continuing till night without a gap.

“My only preference was preparation, I wanted to make sure I was not lacking in it,” said Kamran.

“My mother worked as domestic cleaning staff in a hospital, my father worked as a fruit hawker, my elder brothers left their education to make me flourish.

My whole family dreamt for me to become a doctor.” he added.

This repetitive annual bias toward Muslim students from Hafiz-e-Quran is systematic within the Pakistan educational system and goes against non-Muslims.

Kamran, who is Christian, achieved almost equivalent knowledge in his faith as of Hafiz e Quran candidates in theirs, but there is no such privilege for non-Muslim aspirants in Pakistan.  The Christian and other minority religious education is not taken into consideration by any institution despite the favour given to students of the Quran.

In 1987, the government of Pakistan, in the regime of General Zia-ul-Huq, passed a law that Hafiz-e-Quran candidates will be graced with 20 extra marks at every level after matriculation. Candidates from other religions, whether having equivalent certifications in their faith, cannot avail themselves of this perk.

Cameron Younus, Theologian of Islam and Christian Theology and a research officer at Liverpool Hope University, while discussing this issue said that this is an “unfair advantage” given to Muslim students. Non-believers of Islam will never memorise the Quranic scriptures and will never attain the opportunity of 20 extra credits.

“Along with this university-credit bias he also intensified the blasphemy law of the country.

“The matter of these extra marks has never been properly campaigned against, as the attention of equality groups was diverted towards the blasphemy law,” said Cameron

“Unfortunately, this issue was neither taken up on a ministerial nor judicial level, which itself is a tragedy for Christian and other minority students,” he added.

“Comparatively other religious minority groups somehow get quotas based on their ethnicity and faith. Whereas, Christians continually become increasingly marginalised and remain the social underclass.

To curb this discrimination, meritorious students must raise their voices, otherwise this injustice will keep on going.” Cameron suggested.

Charities and NGOs are working on educational biases but so far this discrimination persists at the same level.

Peter Jacob, Chairman of the Centre for Social Justice Pakistan, termed it a discriminatory law and considered it a “failure of policy makers” to imagine the members of other faiths existing in the country.

“We discussed this policy with the Education minister of Khyber Pakhtunkhwa back in 2009 and he said ‘this policy is not being implemented, but showed his fear that advocacy of it may aggravate this matter’ but later when government was changed, it was practiced”

BACA will be writing to the Pakistan High Commission in the UK and again raise this matter with them for review.  We have previously referred to this bias in articles and in a report we wrote on the Pakistan Education System in Pakistan, back in 2013 (click here).  Since then the matter has a been a regular feature in all of our reports on Pakistan.

To support our work on advocacy and aid for Asian Christians please donate by clicking (here).