By admin2 February 2021No Comments 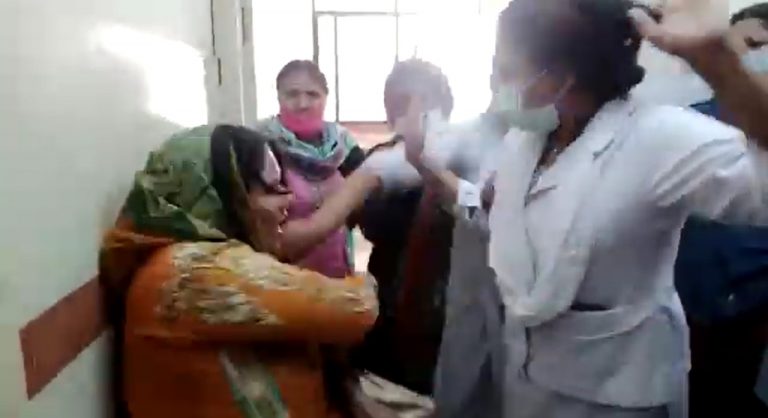 A Christian nurse was attacked by hospital personnel who then registered a case against her with local police on 29th January 2021.

Initially local police at Araambagh Police Station refused to charge Nurse Tabeeta Nazir Gill (42 yrs).  They initially upheld that there was no evidence of a blasphemy a stance that was also upheld by Hospital Administrators who believed it to be a result of a personal grudge.  However pressure was applied by a Muslim mob including leading Islamic clerics who organised a mass protest outside their police station after Ms Gill was kept there for safe custody.

Members of the public weighed in to enact their own violence on an innocent nurse.

A video had been circulating on social media that visually displayed staff members at Sobhraj Maternity Hospital in Karachi slapping, beating and the locking into a room of  Ms Gill on 28th January.  They can be seen shouting abuse and insults mixed with accusations of a blasphemy.  The video also shows attempts to force Ms Gill to sign a confession of a blasphemy, though in her defence she can be heard screaming ““I swear to God I haven’t said anything against the prophet,” she said, “They are trying to trap me under a false charge.”

Initially after questioning Ms Gill, police released her concluding that the accusations were false and based on a personal vendetta by a co-worker.  But they later caved into the demands of the venomous mob who besieged the police station the following day.  A First Information Report (FIR) has been raised against Ms Gill under blasphemy charges Section 295-C of Pakistan’s Penal code. If found guilty this could lead to a death penalty for Ms Gill.

A woman in a burka decides she wants some of the action.

Sabi Wasi the accuser alleges in the complaint that Ms Gill said that only Jesus is the true Savior and that Muhammad has no relevance. He says these words constitute a blasphemy against Muhammed and that Ms Gill should be killed.

“…Her two children are in a state of shock since the time they saw the graphic video of their mother’s beating.”

The family of Ms Gill have confirmed that no action is being taken by police against the Muslim staff and visitors to the hospital involved in the attack on her.  The hospital administration have listed the incident as concerning but have not taken any action against any of the staff involved either.

The Catholic Church are providing assistance to the Ms Gill and her family and British Asian Christain Association will update you on any news relating to this article.

“An unprovoked physical attack on a Christian nurse by prejudiced Muslim colleagues is a despicable indictment on the country.

“Instead of uniting in protecting the population against the threat of COVID-19 the Muslim majority continues its attack on Christians.

“Ms Gill has suffered a brutal beating by staff who took the law into their own hands and tried to force a confession.

“None of them will be convicted as Muslims are permitted to attack Christians with impunity in a nation that despises them.

“Ms Gill however faces a potential death sentence, though no real evidence exists for any blashphemy conviction.

“We call for Christians to pray for her safety.”

Update 22nd July 2021:  Nurse Gill has now escaped Pakistan to a foreign Country.  More details will be rovided on this website in the next few weeks.

British Asian Christian Association, is helping many persecuted Christians in Pakistan, through raising awareness of their plight globally and providing necessary aid. If you have been moved by this account, please enable us to continue this work by donating (here)