Pakistan to have first Catholic Cardinal since 1994 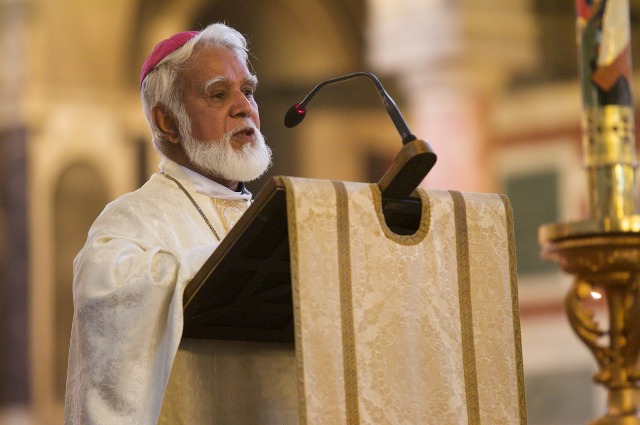 Pope Francis announced on Sunday that he will hold a meeting of the Church’s top council to appoint 14 new cardinals next month, including from Iraq, Pakistan, Madagascar and Japan.
In the event of a conclave of cardinals to name a new pope, 11 of the new 14 being under 80 years of age would be eligible to take part.

“I am happy to announce that on June 29 there will be a consistory meeting to appoint 14 new cardinals. Their origins reflect the universality of the church,” Pope Francis said in an address in Saint Peter’s square.

Among the new cardinals will be Iraq’s Archbishop Louis Sako who has often met Pope Francis to discuss the situation in the war-torn country and the plight of its Christian community.

From Pakistan comes Archbishop Joseph Coutts of Karachi with Archbishop Desire Tsarahazana from Toamasina in Madagascar and Archbishop Thomas Aquinas Manyo from Osaka in Japan.

As well as having the key role of choosing a new pope, cardinals often also hold the highest administrative offices in the church.

Pope Francis, the first head of the church from Latin America is 81 and was named in 2013 after his predecessor Pope Benedict XVI stood down citing the effect of advancing age on his ability to carry out the exacting duties of the office.

The last Pakistani Catholic Cardinal was Joseph Cordeiro who died of a protracted illness on February 11th 1994 after himself being appointed by Pope John Paul II in 1973. Read more (here).

“No-one can deny the faith or passion of Archbishop Joseph Coutts, a man who has dedicated his life to Christ and who is responsible for millions of Christian in Pakistan.

“He has been a great advocate for his community since being ordained a priest for the Catholic Church since 1971.  He has helped to raise awareness about the great suffering of Christians in Pakistan through his work with Aid to the Church in Need and Pakistani Christians are indebted to him for his work.

“I have personally benefitted from encouraging words from him through several email exchanges over the last few years, and his pastoral care has been greatly appreciated.

“Today I have sent him our best wishes from the BPCA and all our supporters and I encourage Christians across the globe to pray for him as he starts his new post. ”

Archbishop Joseph Coutts will officially be made a Cardinal on 29th June 2018.

Archbishop Joseph Coutts does read the BPCA blog and you can send well wishes in the comments page below this post.

Hammersmith, London: White single-mum complains of Muslim no go area after being persecuted because she sang Christian worship songs with daughters

Praying for the persecuted!