By Editor20 September 2021No Comments 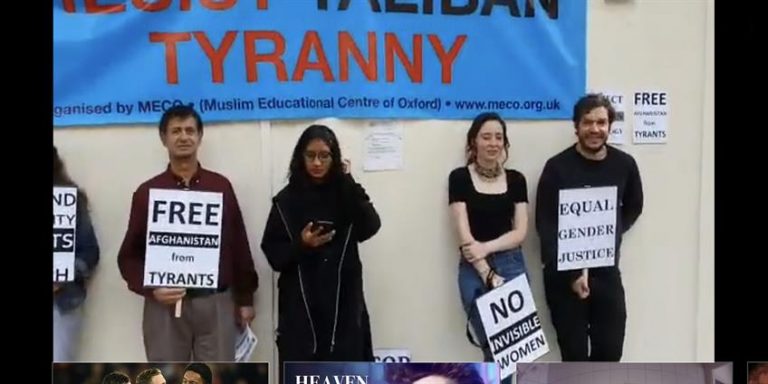 A Muslim-led anti-Taliban rally outside 10 Downing Street was attended by diverse people from a multitude of faiths and no faith on Saturday, 18th September 2021.

The event was organised by the Muslim Education Centre of Oxford headed by Imam Dr Taj Hargey. He said:

“In common with many British Muslims, MECO (Muslim Educational Centre of Oxford) – a progressive and forward-looking community organisation – is horrified by the undemocratic seizure of power by religious militants in Afghanistan.

“Like the majority of right-minded UK Muslims, we fiercely oppose the Taliban’s cruel suppression of women and girls, the blatant persecution of the Shi’ah minority and the indiscriminate targeting of dissidents.

“The Taliban’s triumphalist fanatics are imposing their warped brand and deranged version of Islam upon the long-suffering Afghan population.

“But these theological zealots must be resisted and exposed for their bizarre non-Qur’anic decrees, while UK Muslims need to firmly express their global solidarity with the oppressed people of Afghanistan.

“For these compelling reasons, MECO has taken the hugely unprecedented step of organising a public protest against Taliban tyranny.

“This timely Muslim initiative is evidence that not all the followers of Islam are resigned to Taliban fanaticism.

“It is high time that British Muslims are more visible and vocal in their repudiation of all forms of religious extremism.”

The event was joined by Steve Clapman, who was representing the Central London Humanist Group. He said:

“I am delighted to support this protest against the tyranny and oppression of the Taliban.

“I am against all types of religious extremism.

“I look forward to a time when all men and woman have equal rights in all societies.”

Adam Eljadi, a London teacher derided the extremist Taliban’s taking control of Afghanistan after two decades of democracy and freedom. He declared: “It is important that British Muslims support the fundamental human rights of Afghan women and openly condemn the medieval Taliban”.

Eve, a student from Oxford, said:

“It’s very important that the UK Government acknowledges our role of the last 20 years and does not necessarily go in with another army, another war.

“But it does what it can to protect the choices and desires of free-thinking autonomous women in Afghanistan.”

The event was supported by British Asian Christian Association, who reciprocated concerns about the misogynistic treatment of women under the Taliban regime.

Before the imposition of the Taliban’s despotism in 1996, women comprised 15% of Afghanistan’s highest legislative body. By the early 1990s, 70% of schoolteachers, 50% of government workers and university students, and 40% of doctors in Kabul were women. This upward gender participatory momentum was destroyed when the Taliban seized power. Afghan women were also active in humanitarian relief organizations until the fanatical Taliban enforced their puritanical version of Islam to severely restrict women’s ability to work.

During their first rule in Afghanistan the Taliban banned almost all education for women and girls, even for primary school girls. They removed all women from work except for doctors and forced women to wear hijabs on threat of violence.

The Taliban imposed punishments including stoning, lashing, and amputation, and confined women to their homes. Women walking on public streets would have to be accompanied by a familial male or be lashed.

Many young women had hoped for much brighter futures under the improved freedoms of the previous Islamic republic on Afghanistan.  Hannah Chowdhry, Spokesperson for the British Asian Christian Association, at the event said:

“Since 2002, Millions of Afghan girls had begun attending schools in cities under Government rule, funded by western donors and Afghan women had been participating in public life, including holding political office, in greater numbers than ever before in Afghanistan’s history.

“Though percentages of these empowered females are low by western standards it was a breakthrough for women’s rights in the region.”

“There was a growing acceptance across the country that girls and women should be educated and employed,  but I expect to see a huge regression from these short-lived advances.”

“Young girls and women have seen their dreams destroyed by the swift capitulation of Afghan forces to the Taliban and it is heart-breaking.”

British Asian Christian Association, also shared concerns about the safety of the thousands of Christians in Afghanistan.

We are aware that Afghan Christians are much larger in number than ever before. Emboldened by the presence of Allied Forces many have swapped faith over the last 20 years and have brought up their children as Christian.

Though many of these were quite open about their faith under the previous government, they are now in hiding, some have destroyed their old phones fearful of being recognised as Christians, as they fear a return of the executions and floggings of the previous Taliban regime.

Hannah Chowdhry, spoke about the safety of Christians she said:

“Afghan church services were held in homes secretly, but most Christians have shared their faith with other citizens and now fear being identified and killed.”    Read more (here)

Some of these Christians have added their faith to their identity cards. Not realising that the west would betray them and leave them so vulnerable – they are most at risk.

Though some Christians desire asylum abroad where they can practice their face in safety, very few hold passports and those that do would not be willing to take the perilous journey to reach a ‘safer’ nation.

Moreover, few of the bordering countries are offering asylum to Afghan Asylum seekers – most including Pakistan have toughened their borders. Tajikistan is offering 100,000 asylum seekers safe haven but they have their own problems with Islamists as do other neighbours.

Countries in the west may have to consider offering asylum to Christians and other minorities without a passport as less than 30% of the population is said to have one.

Hardliners under the previous US backed regime wanted to lynch Abdul Rahman a convert to Christianity back in 2006 . He escaped death primarily through the efforts of international dialogue, but the Taliban have already insisted that foreign nations will have no influence on their decision-making.

The current Taliban zealots have re-imposed a ban non-religious music and singing. Worship is intrinsic to the Christian faith. One can only assume that the future of Christianity in Afghanistan looks bleak.

We support MECO’s proposal to introduce an asylum allocation for 10,000 Afghan women to the UK. We also seek a further allocation of 5,000 asylum places for at-risk Christians who face the most deadly of threats under the new regime.

British Asian Christian Association, continues to be the most outspoken voice for Asian Christians. We share reports with Government and academic institutions and are often the first to meet with victims of Christian persecution in the South Asian region. Our work is impossible to fund without the kind donations of our supporters. If you have been moved by this story or the many other real-life accounts we have shared on our blogsite and want to do something to help then please donate (here) or get in touch with us on admin@britishpakistanichristians.org to offer what other assistance you can offer.

Sinjar, Rabia and Zumar and the threat posed by ISIS – An Appeal