By Editor4 December 2021No Comments 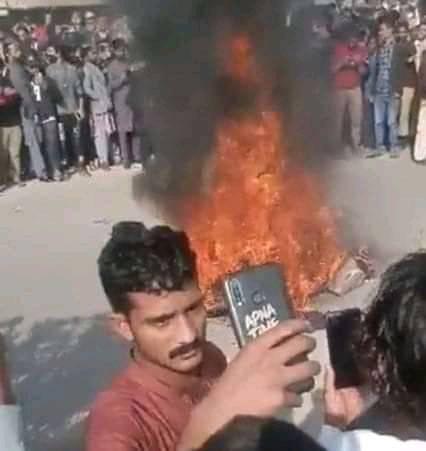 A mob of infuriated Muslims lynched a Sri Lankan man named  Priyantha Kumara (49 yrs), who was working at a factory on Wazirabad Road, Sialkot.  In the heightened frenzy, hundreds of Muslim men kicked and hit the dead body of Mr Kumara, while taking selfies and sharing them on social media.

Priyantha Kumara was working as  a General Manager in Rajko Industries where sportswear and goods are manufactured and had been working there for over 7 years.

From the sound of his name Mr Kumara would seem to be a Hindu and like the existing Christian and Hindu Minority in Pakistan, he would have been suffering a lot of discrimination and constant suspicion.  You can read more about Zafar Bhatti a blasphemy convict for whom attempts are being made to make him the first man to be killed under Pakistan’s notorious blasphemy laws (click here).

On Friday 3rd December, a large number of co-workers at Rajko dragged Priyantha out of his office incensed by allegations that he had desecrated a wall poster that had the holy name of Muhammed written on it.  They say he had then thrown the poster in a waste bin.

The enraged mob which consisted of hundreds of Muslims, beat him to death and then dragged his lifeless body onto the main road where they set it alight.  They then threw tyres on top of him to increase the size of the flames.

A main instigator for the attack has been named as Farhan Adrees a worker at the factory  who it is said played the central role in instigating and gathering the mob. Rather alarmingly, the gathered mob can be heard chanting slogans such as ‘Labaik Ya Rasool Allah’ (Here I am at your service, O Messenger of Allah), they can be seen revelling while beating  the alleged blasphemer.

“Priyantha tore a poster with an inscription ‘Labaik Ya Hussain’ (call to prayer and charity [click here]) and  advice to recite Darood Sharif (prayer of blessings to Muhammed that will invoke blessings on the reciter [Click here]).

“He tore the poster and threw it in a waste bin.

“We watched it and told our foreman that its not right and demanded that our foreman ask Priyantha to say sorry.

“Priyantha went into his office while mumbling.

“We talked to our management and then we all gathered, we cursed him, beat him and sent him to hell.”

Warning: The following video contains graphic footage of violence meted out by the Muslim mob on Mr Kumara:

Muhammad Talha then warned others about what would happen to them for similar blasphemy, he menacingly addressed the camera:

“If anyone desecrates our prophets his head will be cut from his body.”

The video above shows the scale of the mob.

Yesterday (3rd December), Rao Sardar Ali Khan, Inspector General of Punjab Police has confirmed the arrest of the main culprits along with other violent rioters involved in the killing of Mr Kumara.  A total of 126 arrests were carried out after police identified culprits via selfies posted on social media.

Pakistan’s Prime Minister Imran Khan yesterday tweeted: ‘The horrific vigilante attack on factory in Sialkot & the burning alive of Sri Lankan manager is a day of shame for Pakistan.

‘I am overseeing the investigations and let there be no mistake all those responsible will be punished with full severity of the law. Arrests are in progress.’

Today it has been confirmed that at least 900 people have been booked under the Anti-Terrorism Act on behalf of the Ugoki police station Senior House Officer (SHO).

A Police autopsy report has confirmed that Mr Kumara suffered a fractured skull and brain protrusion. Around 99% of his body was completely burnt. It is now believed that Mr Kumara died of brain damage. All his bones, including arms and hip, were broken with the exception of one foot.

The video below shows police moving people away from the burning body of Mr Kumara:

Local witnesses have stated that police stood back and watched while the attack took place.  In the video above it can be seen that police eventually moved the crowd away but made no attempt to stop the body from burning.

The Sri Lankan Foreign Ministry have given a statement that the body of Mr Kumaran will be transported to Sri Lanka for burial, Via Sri Lankan Airlines which will be paid for by the state.

Warning: The video below shows graphic footage of attack on Mr Kumara.  It includes hundreds of men queuing and swarming to beat his already dead body, while filming themselves.  They were desperate to be part of this holy attack:

The Sri Lankan Embassy in Pakistan, have sought a full investigation report into the death of a Sri Lankan citizen from Pakistan’s Foreign Ministry.  They are also in talks with them and Mr Kumara’s employer over compensation to be paid to the family of Mr Kumara.

Pakistani Christians have long describing the dangers they face not only by Islamists but by the general Muslim majority in Pakistan, who are easily lead to kill, maim and destroy when accusations of blasphemy are made.  This is not the first nor the last public lynching  of falsely accused blasphemers.

One of the most famous extrajudicial murder cases was that of Shama and Shahzad who were accused of blasphemy in 2014 after Shama had been raped by a Muslim Munshi (accountant/manager) for a wealthy landlord.  The shame of the rape set the couple to seek freedom from their indentured labour slavery contract, which resulted in them being locked into a storehouse on a field.  The Munshi then accused them of blasphemy and led a 3000 crazed mob to rape Shama before her husband, then beat them to near death.  The couple where then tied at the wrists and dragged across hard mud behind a tractor, after first having their legs broken so they could not run away.  Finally, the couple were burned alive as their children watched.  Youngest son suleman watched the burning and minutes after their death was seen on Pakistani TV crying as he explained he saw his parents twitch as they burnt on a brick kiln fire.  Read more (here).

We continue to support the orphans of Shama and Shahzad (click here) who have grown up forgiving the murderers of their parents.  You can help us support these orphans by donating (here)