Police stood back and watched while Shahzad and Shama were killed. A failed Government cover up dispels the myth that they desire reform.

Image of the brick kiln where Shahzad and Shama were roasted alive.

More details are emerging about the beating and incineration of a young Christian couple in eastern Punjab last week (4th November 2014), including information from their distraught 6 year old son.  The information from relatives of the victims may also explain some of the contradictory accounts.

The victims, Shahzad and Shama, were a young couple in their mid -twenties, originally from a Christian village, Clarkabad where, for various reasons, unemployment has been fairly high.  They have four children, although due to poverty, one of their children was adopted by an uncle.  Reports say that there had been considerable tension between the surrounding villages and Clarkabad because, despite the unemployment issues, it had been the first village in the area to have amenities such as electricity, a post-office, a bank and a high school.  Jealousy because Christian individuals or businesses or communities have become more prosperous despite the disadvantages Christians face has been an occasion for huge outbreaks of violence in the past, most notoriously the sacking of Shanti-Nagar, a largely Salvation Army village in the 90’s.

This particular family had needed work, so some time ago they moved to the nearby village of Chak 59 village near Kot Radha Kishan, Kasur district, around 35 miles south-west of Lahore city.  A number of Shahzad’s brothers (he was the youngest of 6 brothers) and their families also went to the village to work in the brick kiln.  It appears that, as is so often the case in such situations, their employer was also their landlord.  He had advanced them a fee to work for him, which they then had to pay back – this is a standard method to trap people into bonded slavery.  It is so easy to add exorbitant interest or otherwise fudge the figures (especially due to high levels of illiteracy) and keep the victims in perpetual servitude – something that is technically illegal but goes on unchecked and can enslave families for generations.   Relatives reported that such cheating was going on in the case of Shahzad and he had wanted to escape, and thus there was a dispute between Shahzad and his ‘employer’.

Shahzad’s father died on 30 October 2014.  He had apparently practiced black magic involving amulets with written paper charms in them.  Shama, about five months pregnant, and illiterate, was cleaning out his stuff on Sunday 2nd November when she found these amulets, and took them out and burned them along with other occult material, as she wanted nothing to do with such evil objects.  She threw the ashes on the garbage pile outside their house and a Muslim co-worker – according to some reports an overseer or manager in the brick kiln – saw half burnt paper fragments and accused her of burning the Koran and therefore of committing blasphemy.  The entire family (all 6 brothers worked in the brick kiln) approached the owner Gujjar over the issue because tension was so high in the village over the incident.  He told them not to worry, that nothing would happen, and that he would take care of it, but he also told his accountant not to let the couple leave the village without paying back their ‘bond money’.  To further add to the complicated back story, reports are emerging from local Christians that this kiln accountant had actually raped Shama a few days earlier, hence Shahzad wanting to leave.

That night the couple slept in a relative’s house for safety.  In the meantime some Muslim neighbours had told the local police of the alleged blasphemy and warned that an attack on the couple was likely.  The couple returned to their house in the early morning of Tuesday 4th November to get ready for work, but already a small mob was starting to form.   The couple and other relatives took refuge at another family member’s house.  The Christian men and boys fled, leaving the women and girls and little children locked in their quarters for safety as they expected the males to become particular targets of the mob.  A few of the mob knocked on the door at breakfast time and asked about Shama’s whereabouts.  Shama was there holding the youngest child (aged 1).  A man dragged her out, snatched the child and threw him to the floor, but a brick kiln guard managed to rescue Shama and took her to the nearby kiln office and locked the distraught lady inside for safety.  The guard then went to Shahzad and asked him to join her to comfort her until the mob dispersed, when he promised they would be let out.  However the villages of Chak 59 and the kiln co-workers had been calling on the five neighbouring villagers for ‘help’.  Mosques in these surrounding villages started broadcasting the alleged ‘blasphemy’ and calling all inciting the faithful violence.  In response 100’s or even 1000’s of men poured into the village on tractors and trailers, armed with axes, clubs and other weapons.  Some demanded that the kiln manager disclose the couples whereabouts – it’s not clear if he told them, but in any case the mob stormed the kiln office and broke down the outer door but could not break the metal inner door, so instead they smashed in the roof, opened the door from the inside and dragged the couple out to the waiting body of the mob who beat them with the axes and clubs, breaking all their limbs.  The couple were stripped and tied to a tractor and dragged along a rough road under construction and full of crushed stone.  The mob kept beating them.  Family members who witnessed the scene weren’t sure if the couple were alive or dead at the horrifying climax – some think both were unconscious, whilst some say Shama had died but Shahzad was still alive when the mob poured petrol from a tractor over the bodies and threw them into the brick kiln.  At this all the surviving relatives fled to Clarkabad and other places of refuge.  They say that a police van had been present all through the attack, but even though some people begged the police to fire in the air to disperse the mob (none of whom had guns), they refused.  Huge numbers of police did arrive later on and have arrested about 40 of the perpetrators, including Gujjar, the kiln owner.  The police state he and his son-in-law, a co-owner of the kiln, had egged on the local prayer leader to declare the couple guilty from the mosque.

However, there is a major irregularity in the way the police have handled the case.  They have denied the family their right under law to register the official case (FIR – First Information Report) and instead have registered it themselves. They have incorrectly named the couple Sajid and Saima within the FIR ,in what many believe is an attempt to confuse international media.  Normally the state will only register an FIR in a murder case if there are no relatives to take up the victim’s cause.  Shama’s father is protesting this.  He has long been a leader of the bonded labourers (slaves) and sees this as yet another tactic  used to oppress the powerless.  Relatives who witnessed the entire incident are conspicuously absent from the report.   In addition, the authorities deliberately denied the victims a proper Christian burial.  A Christian funeral had been agreed for the next day, but at midnight the authorities took the remains and buried them secretly.  This is almost certainly because a public funeral would be an occasion for the Christian community to mass protest in a newsworthy fashion.  It seems the authorities are trying to stop this story from reaching the international media in the West.   A senior Christian journalist has suggested to a BPCA researcher that these illegal tactics concerning the FIR in a murder case are a clear sign that the authorities are planning to protect the real culprits, and thus want as total control of the investigation as possible to have as an effective cover-up as they can.    However, since then, the federal government has appointed the Christian minister for Ports and Shipping, Kamran Michael , to co-ordinate the case, saying the state has taken on the complainant’s role to set a precedent and make sure there is deterrence against future similar events, although reportedly there was considerable internal resistance to this course of action within the cabinet.   The government has also said that it is taking this course of action so that the family could not be pressured and bullied into a compromise agreement, as so often happens in such cases.

More images at end of page.

The BPCA has initiated a permanent benevolent fund for the family of Shahzad and Shama. Our desire  is to free them from their bonded labour status and we will work towards providing a new safer environment for this family, who have suffered the loss of loved ones in a hellishly brutal and savage manner.  This family have been left with serious emotional and psychological scarring and are receiving counselling.  The orphaned children are being cared for by Shahzad’s family and your donations will help support them, as the children grow to adulthood. If you would like to contribute to our appeal our bank details are as follows:

Alternatively if you would like to send an immediate donation please use the pay-pal facility on the top right hand corner of our blog, or simply send a cheque made payable to the BPCA to our address; 57 Green Lane, Ilford, Essex, IG1 1XG.

With your support we hope to change the lives of millions of Christians in Pakistan.

Rushed funeral of the couple alleged to be Government of Pakistan attempt to prevent mass media coverage.

Prayers for the couple were charged with emotion. 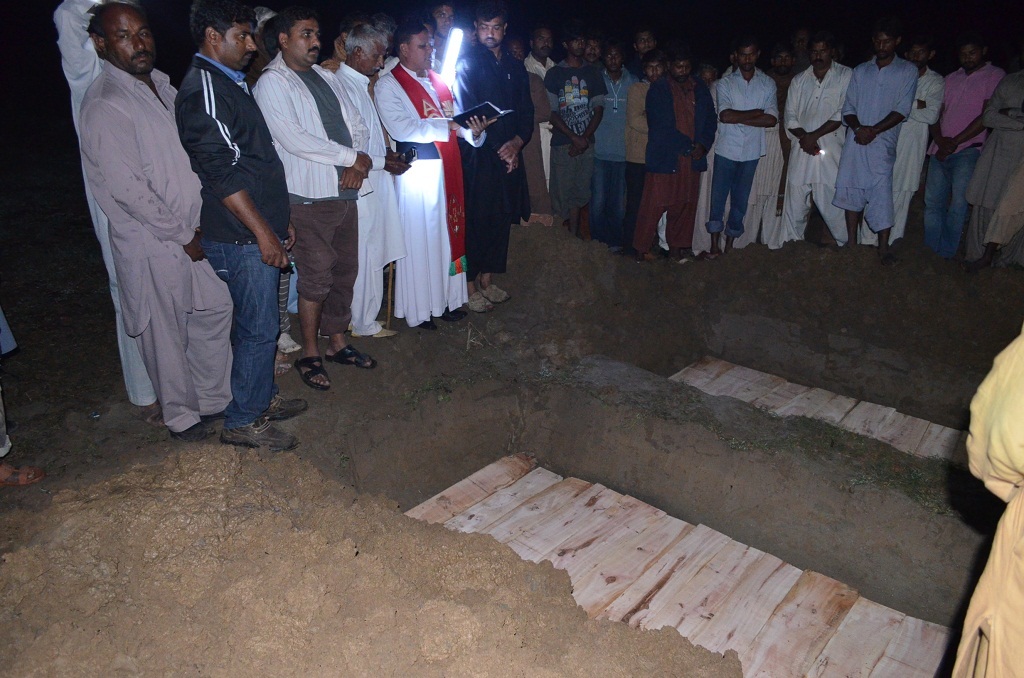 A simple burial for a couple who lived a poverty stricken life full of persecution.
Only two pall bearers were required due to the little that remained of the couple.
Only five police made it to the scene of the crime now hundreds protect local politicians.
This community has been shocked by the violent that has left so little a trace of Shahzad and Shama.

Charred remains highlight the brutality of the incident.

Despite many prayers it will take a lot of time before this area of land feels safe or peaceful again.

Excerpt from the targeting of minority ‘Others’ in Pakistan: Security forces, including Pakistan’s intelligence agencies,…