Thailand to deport over 70 Pakistani Christians

By Editor12 October 2018No Comments 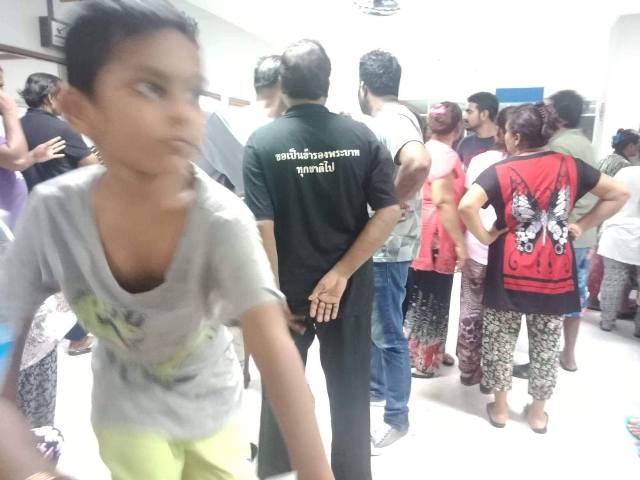 On Thursday over 100 Pakistani Christian asylum-seekers from across Bangkok were convicted of overstaying their visiting visas and were fined £100 – £160 each for overstaying their tourist visa’s, that allowed entry into Thailand. Read UCAN news article (here) or BPCA article (here)   The day after the raid in our initial report where over 70 Pakistani Christians were captured, there was another raid where 7-8 families were also taken into custody, the exact number of which is yet to be determined.

BPCA stepped in to pay these fines to prevent the individuals from having to endure the brutal conditions in Central Jail where prisoners can be beaten, are forced to wear shackles and to sleep naked at night before other inmates.  This situation was exacerbated by the fact an additional 40 children were arrested with their parents meaning that the vulnerable and terrified minors would have been sharing cells with paedophiles, murderers and rapists.

Usually payment of these court fines would result in an indefinite stay in Thailand’s slightly less brutal Thai Immigration Centre, which has the advantage of a more salubrious detainees rather than concerns about hardened criminals and those incarcerated can wear the clothes in the evening an do not have to wear shackles.  But on this occasion Thai authorities have decided to use a more hard-line approach and after several negotiations with the current Government of Pakistan have initiated a no-tolerance policy culminating in immediate deportation.

The Thai government is sweeping the testimonies of Pakistani religious discrimination under the rug with their relentless hunt for asylum-seekers. Trucks cage men, women and children on their way to be processed for overstaying their visas. The Thai media has reported that all taken in this sweep will be repatriated back to Pakistan purportedly within the month.

While the world watches Asia Bibi, the Pakistani government has apparently cut a deal with the Thai authorities to round up Pakistani Asylum-seekers and send them home, whether or not they have been recognized by the UNHCR as approved refugees. This most certainly means sending them back to a life in prison, to face violence from their neighbours, poverty and more exploitation without intervention from the local authorities who are meant to protect them but have often participated in their persecution, particularly by misusing the blasphemy legislation.

The fact that there are legitimate Pakistani refugees fleeing religious persecution and violence related to the country’s draconian blasphemy laws, gives the Pakistani government a vested interest in silencing their cries. They want to depict themselves as caring about religious minorities and extending them civil liberties, but disparity between the technical legal text and the lack of will to actually enforce constitutional rights has continued for sometime and these promises feel tentative at best.

Already 70 Pakistani’s from Taling Chan District Court have been notified that they will be deported (click here) but more with follow as victims from other courts are slowly being notified of the same punitive measures.

The tragedy of this situation is that Royal Thai Authorities have no respect for UN Refugee Determinations and many of those arrested have been approved for asylum and were simply waiting for their call to another nation, for them the news is a devastating blow.

Visa overstayers are considered a nuisance to Thailand and they are regularly accused of taking jobs that should go to Thai people. The Thai authorities have become relentless in their pursuit searching from house to house, at all hours and in potential workplaces. They have clearly said they will “blacklist” them and deport them back to Pakistan (click here)

Thailand regularly arrests and incarcerates foreigners who are in the country illegally, even if they are recognised by the United Nations as refugees who are fleeing persecution.

Foreign ministry spokeswoman Busadee Santipitaks, in a press statement said ‘Thailand is not part of the United Nation’s 1951 Refugee Convention and authorities have to act on violations of the law.’ She said the government deals with migrants with UN refugee status on a case-by-case basis.

Inmates were told they will be detained in the IDC until their deportation and BPCA officers who paid our fines for us, were able to film the moment that those arrested were informed of their fate.  Each man accepted his fate realising their was no other choice simply nodding thanks to the fact they were told they would be safe and not harmed. The desperate look in the eyes of the men is apparent as they widen with the realization they will return to face more persecution and perhaps dire consequences from the draconian blasphemy laws.

The arrests occurred after an earlier announcement that foreigners with illegal-status would be sought out and arrested as part of a major crackdown, in a huge press campaign on Monday that seemed to be supporting the right-wing populist vote in Thailand. In the media Defence Minister Prawit Wongsuwan declared the current campaign against visa-overstayers would be for a one month duration.

“It is heart-breaking to hear of these forced deportations especially when you consider that a large proportion of those being sent back had secured refugee determination by the UN, a process that stole 6 years of their life.

“These arrests that are bereft of emotion and fail to mitigate the suffering of these asylum-seekers are clear use of populist protectionism policies.

“It only serves to diminish further the already tarnished the reputation of Thailand as a nation.”

“Every Pakistani Christian asylum seeker had found illegal work and were fending for themselves, given the right to work they could have become valuable human capital for the nation of Thailand.

“Most of the asylum seeker community held a raft of skills and qualifications that would have complimented the natural drive towards progress every nation sets on.

“The myopic view held by officials and elected members of the Royal Thai Government has leached them of a high-potential resource.”

Distressed woman uncertain of their future.

Barely any space in this male caged van.

It’s time to call a spade a spade! The revelation of the UK’s largest ever…

We have one greater than us to fight our battles