The Wombles of Ilford

By Editor4 October 2014No Comments 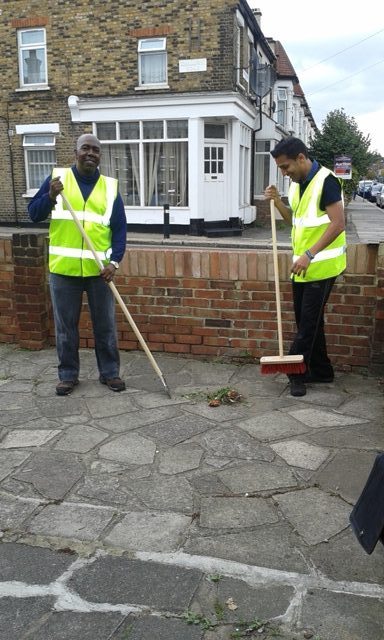 The groups first outing achieved limited success so support was galvanised by reaching out to a local mosque and church with the help of Habiba Ahmed of Redbridge Amey (recycling contractors to Redbridge Borough Council).   The new partners for the project include; Eden Christian Centre, Albayan Welfare Centre and Mosque, East Ilford Betterment Partnership and the Prince of Wales Pub who allowed their pub car Park to be used as a short term depository for gathered waste.

“Not only do littered streets damage business and tourism opportunities but it also costs Redbridge Borough taxpayers £4.2million a year to clean them. We want to encourage as many volunteers as possible to come and take part in our litter Clean-up.  It will show others that we take pride in the environment in which we live , work and play.”

Saturday’s project started at 10:00am from Eden Christian Centre’s car park and although a letter drop along St Mary’s Road, Connaught Road and Stanley Road yielded no volunteers, seven volunteers within the church participated and cleared the aforementioned roads of litter after a clean-up of the church car park.

“We wanted to be involved in this project as it gave an opportunity for the church to serve our local community.”  Garbage can reduce community morale, this is why it is so important we keep our communities clean.”

He added;  The bible tells us “The earth is the Lord’s, and everything in it,  the world, and all who live in it; Psalm 24 v1.”  “This directs Christians to consider their environment and local community in all they do as it all belongs to God.”

“We collected 25kg of rubbish and 7kg of recyclable waste.  Our streets looked cleaner and the volunteers bonded well together.  The project was a huge success and we hope that the number of local volunteers will grow in number and geographical impact stretch wider as the project develops.”

Our next Capital Clean-up will take place from 14:00 at Clementswood Community Centre, 14a Connaught Road, Ilford, Essex IG1 1RN.  We will be partnering with the Albayan Centre and East Ilford Betterment Partnership.  The roads to be cleaned include;

If local residents would like to join the project please contact Wilson Chowdhry on 020 8514 0861 or email: info@eastilfordbettermentpartnership.org

Whilst waiting for community volunteers the project volunteers cleaned the Church forecourt.

Litter filled the church forecourt blown in by the wind.

Volunteers set to the task immediately.

Connaught Lane a notoriously dirty alleyway was cleaned as a priority.

Redbridge Amey provided kits of equipment to bolster the existing EIBP Capital Clean-up gift.  All participating groups were in receipt.

Eden Christian Centre welcomed volunteers and fed them Pizza after the clean-up.

The streets were cleaned to a high specification.

Bags of rubbish were strewn on local streets.

Litter pickers made a dirt job easier and more hygenic.

The graffiti in the image has been reported to Redbridge Borough Council and they will remove it as a priority for partnership groups.

Some of the litter in the church courtyard.

Community spirit was evident in the hard-working volunteers.

Every effort was used to make the local roads clean.

Stanley Road was in need of a good clean.

Connaught Road was cleaned despite rain.

The bag of cement was removed Monday morning from Stanley road.

Connaught Lane alleyway was spotless after our Clean-up.

An inviting Gazebo was erected to welcome local volunteers.

Visitors enjoyed awesome January at Meals for the Needy project