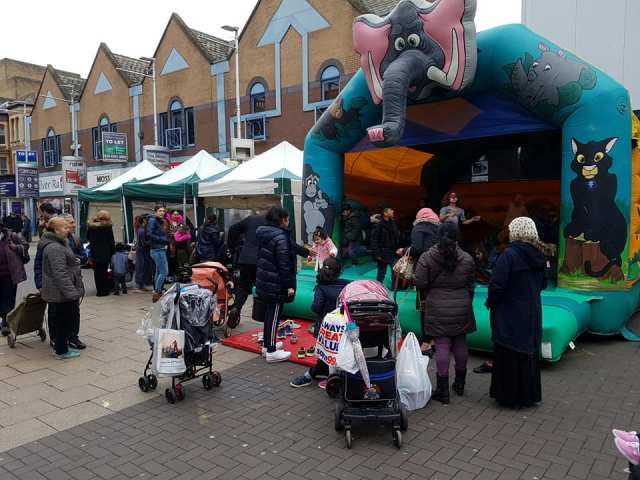 Friendship and togetherness was the theme for an event in Ilford Town Centre from 23d April – 28th April 2018. ‘Stronger Together’ were words written on a banner during a week of community cohesion – one the likes of which Redbridge has never seen before.

The event was put on by the British Pakistani Christian Association and groups such as Ilford High Road Baptist Church, Albayan Welfare Centre and Vishnu Hindu Parishad collaborated to share conversations with local people on faith and diversity.

The event was the brainchild of Wilson Chowdhry who last year held a peace vigil after a series of terrorist attacks in the UK, threatened to create polarity and division amongst the well integrated communities residing in Redbridge.

Participating groups held stalls in the twin centre where they shared tea, coffee, conversations and literature on the key faiths represented i.e Christianity, Hinduism and Islam.

“The whole idea was to show local people that different faiths can get along together and also a chance to dispel myths about faiths, other to our own,” said Wilson Chowdhry.

“Moreover, it was a time to knit a sense of togetherness and harmony in Redbridge using the simple process of a drink of tea or coffee to create a relaxing environment. He added:
“All this week in the town centre you will find a number of commercial market stalls and quite distinctly a set of interfaith harmony stalls, that are being championed by members of the local faith communities. It’s a chance to shop and enjoy fellowship with other people in a remarkable town centre – this does not happen anywhere else!.”

“The faith stall operators are out with the intent of sharing details about their faith with local residence in a spirit of reconciliation and hope. In recent years the onset of terrorism in the name of faith has deepened – to some extent – polarity within communities and this weeks event is a change to bridge the gap and bring our community together.”

On Saturday Mr Chowdhry’s group, the East Ilford Betterment Partnership (EIBP), up the stakes a little and will be having a short concert on the community pitch in the town centre. The event will include a bagpiper, some Bollywood dancing and some Zumba and interactive dance sessions.

This event is the first of many regular events the next set which will operate from the 21st of may till the 28th.

Themes for the event will change and next months event will hopefully focus on local history. Charities, Community Groups and Faith Groups are invited to join us at future events and will be entitled to a free pitch. Please call 020 8514 0861or email: info@eastilfordbettermentpartnership.org

We hope our events will ignite passion for our town centre amongst local people and make Ilford a hub for culture and community. Wilson Chowdhry, said:

“Last year’s terror attacks revealed the brokenness of our communities. Terror groups stir up suspicions and stereotypes to divide society for their own ends.

“To curb progress of such undesirable agendas we have to challenge the status quo and spread unity through our own efforts.

“For many this will only happen once we can break-up our existing behaviours and attitudes and take on more egalitarian principles.

“Events like the community fayre organised in Ilford town centre this week put diverse groups into close proximity with one another, permitting new ideas to form and wider relationships that breach our usual pattern of insular social circles.

“Such a heady eclectic mix of people creates a richer cultural tapestry in our local area, one fashioned on inclusion rather than suspicion.”

Food Glorious Food! Photo tour of our Meals for the Homeless service.