By administración17 marzo 2019No hay comentarios 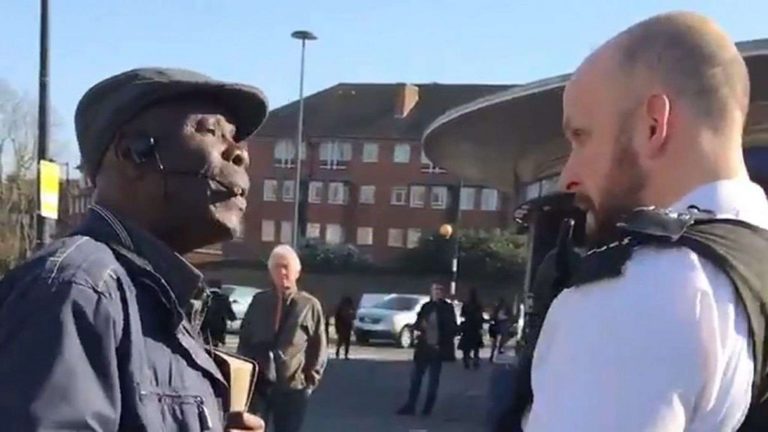 The Professional Standards Unit of the met police has initiated a review into the arrest and later de-arrest of Oluwole IIesanmi, a Nigerian street preacher. On Saturday 23 February in front of Southgate Tube station, North London the committed born again preacher was simply sharing his faith in the type of common preaching which churches and Christians across the country are often involved with.

Police officers said they arrested Mr IIesanmi, “in order to prevent a breach of the peace”, yet in the video that was shared with us by an eyewitness we can see no malice emanating from Mr Ilesanmi.

In a verbal exchange recorded in the two-minute video we have acquired from the primary witness who recorded footage, one officer tells the unidentified preacher that he was “required to go away” because he was “disturbing people’s days”.

Mr Ilesamni responded by saying, “I will not go away because I need to tell them the truth. Jesus is the only way, truth and life.”

An eyewitness told BPCA, before the police arrived, the preacher was being confronted aggressively by a young man, apparently Muslim and in his 20s, wearing a hooded top. The man was loudly abusive about the Bible and God with his face close to the preacher’s. The young man also threatened the preacher, brandishing a closed fist holding prayer beads.

On his twitter feed the same eyewitness wrote in several messages (sic):

“Have the full video I stopped a Muslim guy from hitting him ! Stopped it getting nasty”

“I was there I can say this man was preaching and did nothing wrong had a hostile person near him . He was a bit loud .. but”

“The worst part of it was that when he was arrested and the preacher said please don’t take my Bible, the other policeman said well then you should’ve thought of that before you were racist?!!!”

When the police arrived to question the street preacher they were witnessed saying that there had been a complaint of “Islamophobia” made against him. It is not known at the time of writing who made the complaint to the police. The young man ran away from the scene as soon as the police appeared.

According to Helen Millichap, Chief Superintendent and Enfield Borough Commander, the officers responded to a 999 call at 13:55 on Saturday 23 February from a member of the public who claimed that Mr IIesanmi had made “Islamophobic” comments and been confronted by “a small number” of people. According to the arresting officers, a second witness “supported the allegations made by the original caller”.

Officers “deemed it appropriate to remove” street preacher Oluwole Ilesanmi from the area, according to Chief Superintendent Helen MillichapIn the statement the Commander further justified the arrest by describing the preacher’s activities as being “perceived as being a potential hate crime”. However, nothing in the eyewitness account or video suggests that this was the case.

The police response also contradicts eye witness accounts by failing to make mention of the young man in a hooded top seen aggressively confronting the street preacher threatening him, before fleeing when the police arrived.

The preacher can be seen pleading calmly to two white police officers not to take away his Bible away from him. However in what can only be viewed as a humiliating arrest the officers placed Mr Ilesamni’s arms behind his back, cuffed him deprived him of his Bible despite no attempt to prevent the police officers from their ‘duties’. Even worse rather sardonically one officer can be heard replying, “You should have thought about that before being racist [sic].”

In 1997 Alison Redmond-Bate, the first street preacher to be arrested in Britain since the nineteenth century, was ordered to stop preaching by a police officer after a crowd of hecklers became abusive. When she refused she was arrested. However, in the appeal court, Lord Justice Sedley ruled, “A police officer has no right to call upon a citizen to desist from lawful conduct.”

“Met police officers have very conflicting views on what causes offence in relation to religious matters on London Streets.

“In 2017 when BPCA led an Easter Parade event in Ilford Town Centre local Muslims began chanting Allah hu Akbar on a buskers mic, whilst Christians prayed on a live stage.

“The event caused a real panic in the streets where Christians and non-Muslims alike ran for cover until they realised it was simply an unlicensed.

“The Muslim gang then began behaving aggresively with the Christians who had applied for a temporary event notice until police were called by myself the main organiser for the event.

“When local police arrived they simply informed the Muslim group they were not permitted to use a PA without a license and allowed them to retain their pitched stall before the Christian stage. More details about this incident can be read (aquí)

“Rather bizarrely the mere utterance of words from the bible on a London street resulted in a rather humiliating arrest of Pastor Ilesamni.

“Policing protocols, policy, guidance and training regarding freedoms of speech and what constitutes a breach of the peace must be revisited so that Christian pastors are protected from unlawful arrests such as that exhibited in the video we have shared.”