Muslim Man Attacks 7-year-old Christian Girl and admits to 21 rapes after being caught! 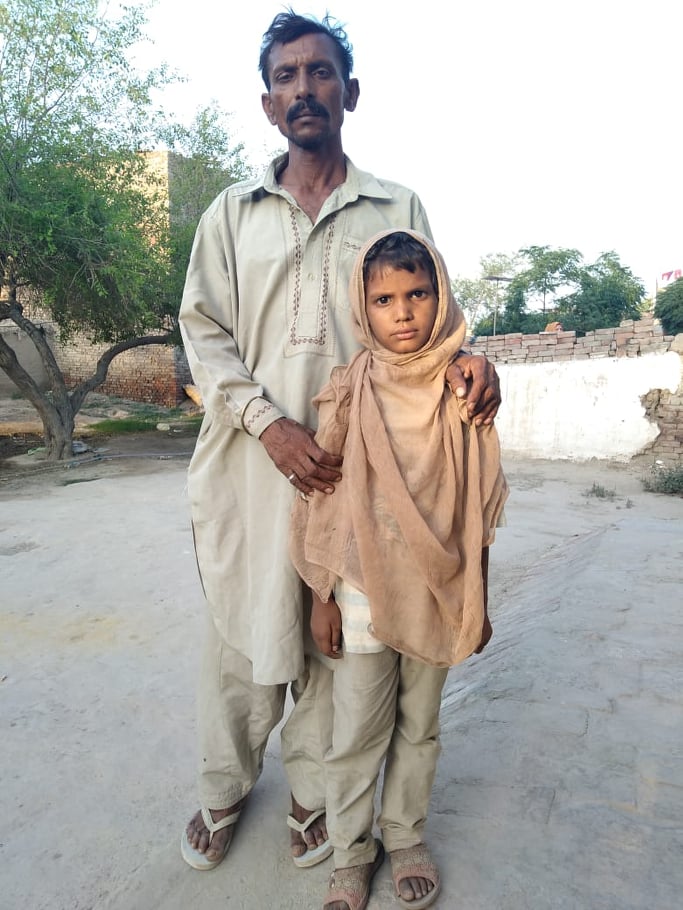 A 7-year-old Christian-girl crossing a wheat field alone on the way home to celebrate Easter with her grandmother was rescued from an attack when locals heard her screams.

Nadia Masih was travelling alone to a local farmhouse at 8pm on 11th April a journey of around 5km distance, when she was grabbed by a 24 year old Muslim Neighbour Muhammad Shoaib.  Usually Nadia would undertake the long and arduous journey with a friend, but in her excitement milk for her grandmother to make her favourite Kheer dish for Easter, meant she rushed home.
Fortunately for Nadia her screams were heard by a local Muslim landowner who came to her rescue whilst Shoaib was violently struggling to undress her.  The Landowner followed the sound of the screaming and grabbed the would-be-rapist and during the ensuing scuffle, other men also came to her aid and began to beat Mohammad Shoaib.  Around 5-6 men apprehended him and frog marched him the short distance to Nadia’s home where she was comforted by her grandmother, while her father joined the men and took Mr Shoaib to Talwandi Police station.
While in police custody, Mr Shoaib who has been seen lurking around nearby streets, confessed to the attempted rape of Nadia and to 21 other accounts of rapes in the village.

Nadia is the daughter of Boota Masih, a 44-year-old resident of Talwandi, district Kasur where he lived with his late wife Balqees who died in an accident 4 years ago. Boota whose right arm was paralyzed in that accident, was left to care for Nadia, his 2 other daughters Eisha (13 yrs), Saadia (12 yrs), and his 2 sons Adil (8 yrs) and 6-year-old Badil on his own.
Mr Masih, a labourer by trade is forced to bring up his 5 children in his self-built one room brick house whilst trying to survive on a daily wage of £2-£3 pounds and is unable to afford the school fees for his children.
Mohammad Shohaib has since been sent to Kasur central Jail for judicial remand whilst his wealthy influential parents are piling pressure on Boota Masih to drop the charges.
Pastor Mukhtar Mehboob, senior Pastor of Saint Paul’s Church Talwandi, which is the only Church in the village and attended by over 100 Christian families, is supporting the family and has been accompanying them to the police station throughout the investigation.
Talking to Mehwish Bhatti, Pastor Mehboob believes it was the grace of God that has revealed Mohammad Shoaib’s criminal past after the attack on Nadia.  He went on to say “I have had to help members of our congregation with small arguments between them and Muslim’s, however, Nadia’s case is a serious one”.
He added:

“it is sad that none of the other families of the 21 girls raped by Shoaib have had the courage to come forward to prosecute him for the previous crimes.

“This means all the pressure to drop the case by the family of Shoaib is being directed on a very vulnerable and terrified Christian family.

“Even then we stand with God and will be seeking justice as a church providing counselling and any other support required to Nadia and her family.”

BACA has offered them support by way of providing a solicitor however the family have said they do not need this yet as police seem to be investigating and taking the crime seriously. We have asked Mr Boota Masih to inform us if the situation changes.

The family have asked for BACA to build a toilet facility at their small family home which would cost of £450 and would include a water tap, and flush and concrete building.  This would prevent the daughters of Boota Masih from having to use a local field where they would be vulnerable.  We would like to help with this project but need to raise the funds to make this possible.  If you feel moved to donate please (click here)

Boota Masih thanked God for his daughter’s protection, he said “It is so hard without my wife to watch over my girls as they get older, I am grateful to God that he protects us in answer to our prayers.”

A copy of the FIR

Whilst at Talwandi Police Station Boota Maish was able to lay the following charges over Mohammad Shoaib, which are now registered on an FIR:
376. Punishment of rape: [Repealed by the Offence of Zina (Enforcement of Hudood) Ordinance, VII of 1979, S. 19].
511. Punishment for attempting to commit offences punishable with imprisonment for life or for a shorter term.

“Christian girls in Pakistan are always under the threat of being kidnapped and raped because they are vulnerable due to poverty.

“More must be done to improve policing of these cases as often frightened families except a bribe in lieu of justice, to avoid being targeted by influential families protecting criminals.”

Image Source Jakarta Post. This morning (Sunday 13th May) three churches in the city of…