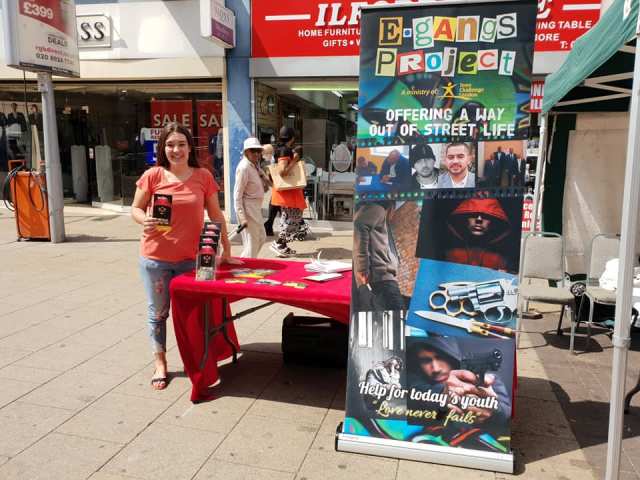 Dozens of teenagers have committed themselves to spend time in Ilford Town Centre engaging with children and teenagers during the first week of the summer holidays, in their attempts to promote peace, love and unity in Redbridge.

Over the last few months Redbridge Council has agreed a monthly schedule of community events with British Pakistani Christian Association in Ilford’s pedestrian broadway, to enable charities and community groups to seek referrals via a direct public interface. The events attract local people through the organising of a commercial market interspersed with social enterprises and NGOs and free children’s activities. The events are rapidly growing in popularity due to the themed nature of the one week events. Already we have seen a Royal wedding party in the town centre and a football-themed event with England flags painted on people’s faces to celebrate the great effort of the English football team.

From the 23rd – 28th of July however the event takes on a more serious connotation, as the BPCA partners with ‘The Challenge’ on the National Citizenship Service (NCS). The Challenge was founded in 2009 and aims to build a more integrated society, where people from different backgrounds appreciate and understand each other’s differences. One of the ways NCS does this is by providing volunteering opportunities to teenagers in their local communities. and the BPCA will also partner with E-gangs a charity ‘that specialises in mentoring and assisting young people exiting a gang related lifestyle who are caught up in crime, drug dealing, knife/gun crime, county lines (young people being exploited to sell drugs from London across the UK)’.

Teenagers from NCS were preparing for their volunteer day at the offices of the BPCA on Saturday 14th July at Clementswood Community Centre, 14a Connaught Road Ilford. Whilst there it was agreed that they would theme their event around peace, love and unity aspects they felt would best preserve the local community.

Concerned about the rise in gang-affiliation in the borough with 33% of youth offenders evidencing being gang affected in a report released in March 2017, by Redbridge Council titled the ‘Youth Justice Plan and also about growing youth violence involving knives and guns across London, they agreed to organise a peace vigil with the BPCA.

The vigil is to be held at Redbridge Peace Monument (click here) located at the Winston Way subway where Kashif Mahmood was killed. at 2pm on Friday 27th July 2018 led by BPCA and the NCS Team. A poem written by young volunteer Chinwedu Akus wrote a poem that will be read out to visitors at an event that will also have short talks from Parvin Mahmood mother of slain teenager Kashif Mahmood and Rev Andrew Willis from High Road Baptist Church.  The event organisers are challenging people of all ages concerned about growing reports of violence to join us at the monument adorned in the colour red as we remember the victims of gun and knife crime in our borough.

Redbridge peace monument was installed by the BPCA and East Ilford Betterment Partnership in 2011, close to the location where teenager Kashif Mahmood was killed in a brutal knife attack at the tender age of 15. His death sparked a lot of borough-wide soul-searching when he became the third teenager to be killed by another teenager in Redbridge. The monument to all teen-knife-crime victims has never been desecrated and has become a beacon of hope.  It is a place where anti-violence groups speak to teenagers about the consequences of weapon-use. Moreover, it reminds us all how precious life is and how easily it can be lost.

During the week NCS volunteers will be working on holding a public art competition in Ilford during the Redbridge Fayre, which will be open to children and teenagers and help bolster an existing friendship centre that has been organised by local churches in Ilford Town centre. This will enable the volunteer teenagers to befriend other local teenagers who may be feeling lonely and isolated, whilst also helping identify those who require more professional help, to whom pathways to further services will be provided..

Chinwedu Akus was moved to write a poem about the violent social malaise that has plagued teenagers in East London:

A city of angels where demons lurk

Jordan said something wrong, and he got it first
It seems like this disease is spreading

You’d think living as a youth is an accomplishment

But they won’t even let you finish your last days

Stabbed 4 times in a state of confusion and craze

6 bodies dropped in Barking and Dagenham

Within the space of 3 weeks that is

Probably wondering what the murderers gained

But the mothers are out here going insane

Her teenage son does not laugh at her scolding

This mother stares and reminisces

Waltham Forest and Redbridge keeping up the pace with their trifectas

Say something wrong and the boys are coming to get ya

The doubt we’re not safe

Everyday we walk the streets

There’s no loss but where is the gain.

E-Gangs will have a constant presence at our event through the week which has already proved fruitful during last month’s Redbridge Fayre. They spoke to BPCA about their strengths which are: ‘getting young people into ETE (Education, Training and Employment) this can be a barrier at first to exchange one lifestyle for another. However, E-gangs is in for the long-term and will journey with the young people.

‘All of our workers are role models which enables the young person to see change is a positive thing and it is possible. The second strength is to support the entire family unit as they are greatly affected. This in turn should impact a change in the wider community.’

‘We are based in Redbridge but work with any young person who wants or requires help in London. Our motto is love never fails. We are faith based but in no way faith biased.’

E-gangs long-term vison is to take their clients into sheltered housing. They relocate young people in order to take them out of their bad environment for a time to be equipped to rebuild their life in a positive way.

“Violent crime is a distasteful crime that always has long term ramifications to the victims the perpetrators and friends and families associated with both sides. There are simply no winners in crimes of this nature.

“The growing social-malaise of gang-affiliation in Redbridge has to be nipped in the bud. Redbridge has for a long time been free of gangs and we must strive to protect our young people for entering into a lifestyle choice that creates victims in every sense.

“For the first time young people will have a chance this week to meet with the specialists and the committed as many people give up their time to share a new way of life and an array of opportunity for young people in our borough.

“Bringing positive change to community has to begin through the passion of local people.  With so many young people involved in this project the prognosis seems to be one that is extremely favourable. ”

Our friendship centre has already been a huge hit with local teenagers seeking a free drink and a chat.

The Challenge is a national charity founded in 2009. Our vision is simple – we want to see a more integrated society where people from all walks of life understand and appreciate each other’s differences. Helping to create a generation of people who are more connected and more active in our communities and workplaces is the first step towards achieving this.

The Challenge is doing this by designing and delivering programmes that bring together people from different backgrounds to develop their confidence and skills that help them understand, trust and connect with other people and their communities.

The Challenge has helped more than 175,000 young people over the past eight years, through its three programmes NCS, HeadStart and Step Forward.Young people experience activities as varied as rock-climbing, volunteering in their communities or learning to cook for themselves. Through these experiences they forge strong friendships with new people from different backgrounds.

For more information about The Challenge, visit http://www.the-challenge.org/.

Hundreds of people attended a ‘Party in the Park’ at South Park, Ilford that brought…