4 Occultists arrested and charged for ritual killing of Diya Bheel.

By Editor11 January 2023No Comments 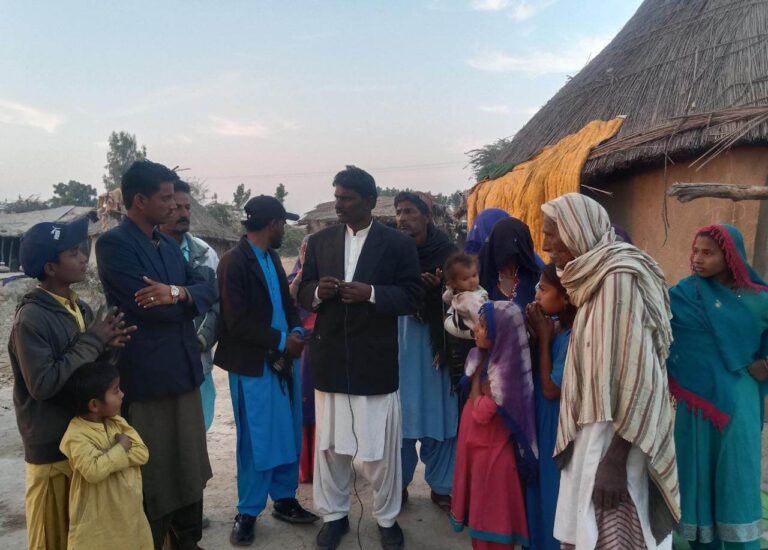 IMAGE: BACA volunteer Pastor Danyal Masih meets the family of Diya Bheel and prays for them.

Four Occultists have been charged  for the ritual killing of Diya Bheel, a mother of five who was gang-raped, skinned and beheaded on Boxing Day 2022, in Sanghar, Sindh, Pakistan.

Amongst those charged with the crime is her own brother Diya Ram.

All four suspects have been remanded into a five-day-custody by the anti-terrorism court in Nawabshah, Sindh.

Police have revealed that one suspect has already confessed his involvement in the murder of Diya Bheel, this was a major breakthrough in the investigation.

Women from the same village are terrified that they will be attacked next fearing that black magic is rife within the rural Hindu community surrounding them.  Read more (here) 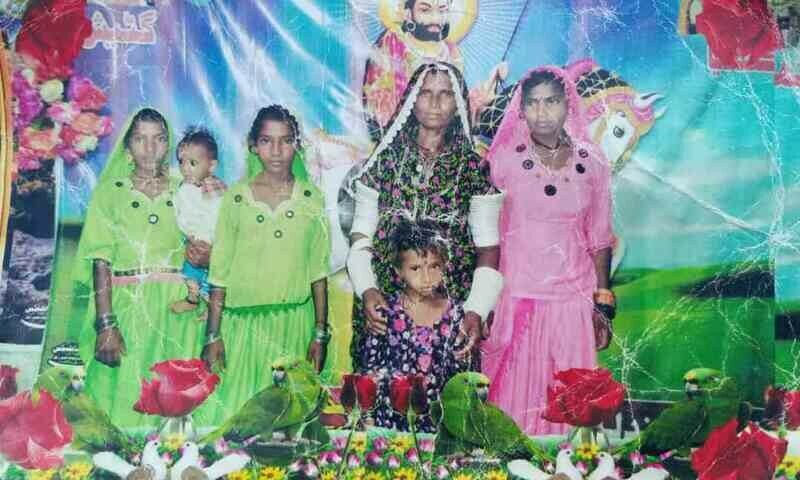 IMAGE:  Diya and her family around 10 years ago.

Police investigating the gang-rape, skinning, mutilation and beheading of a Mother of 5 in the District of Sanghar, Sindh, Pakistan, have charged 4 people.

The sadistic murder was conducted on Boxing Day 2022 (26th December), but the body was only retrieved on 27th December after sniffer dogs located the macabre remains.  The body was found in a field in Deputy Sahab Village around 1.5 km away from the field in Sanjhoro that Diya was abducted from.

A first information report was registered against unidentified people under Section 302 of the Pakistan Penal Code, and Sections 6 and 7  of the Anti-Terrorism Act at Sanjhoro Police Station on 28th December.

Two of the men arrested are recognised as senior warlocks (black magic practitioners) within a local occult ring. One of the men has been named as Diya Ram, a brother of Diya who was suspected from the first day, after sniffer dogs traced the scent of Diya to his home.  Diya Ram was also implicated in the confession of the main suspect.

Ropoo Bheel, a known bhoopay (sorceror), is the primary suspect. Local Hindus have reported that Ropoo and Loneo have been using paranormal powers to help people with sickness and disease but also for evil, through the application of curses.

DIG Chandio explained that the anti-terrorism court in Nawabshah, Sindh has remanded the prime suspect into a five-day police custody.

When questioned on the mutilation of Diya’s body, DIG Chandio referenced the confession of Ropoo who had intimated that the body parts were taken, as they are needed for black magic.  Ropoo believed human body parts contain great power.

A DNA analyses is being conducted and a fuller investigation will take place after results from forensic labs arrive. Digital data is being gathered including geo-fencing, which will illustrate that the suspects where in the right place at the right time for the crime.

DIG Chandio, confirmed a woman’s comb, hair believed to have been cut from Diya’s body, a knife, and a blade  gleaned from Ropoo’s home, helped resolve the case. These have been sent away for forensic examination.

Ropoo detailed that after killing Diya they hid the human remains they had sheared of her body, in an open area. However, police have not located the ritually-removed skin or body parts of Diya. Ropoo has said when he returned the next day they saw animals there. It is believed that animals may have consumed the remains. 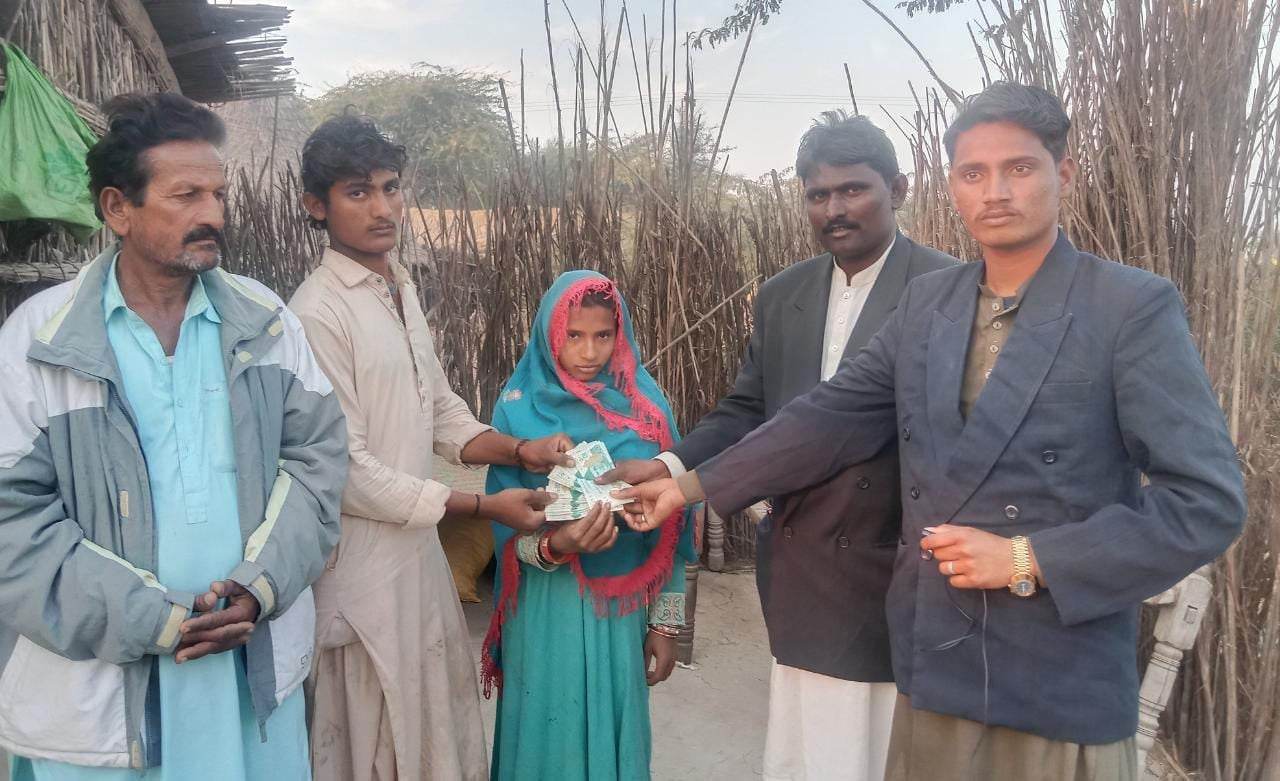 VIDEO:  Evangelist Danyal our regular volunteer was accompanied by Evangelist Sagar Masih.  They travelled to the village of Sanjhoro to provide support and financial aid to a family in pain.  When they arrived on 3rd

VIDEO: The evangelists gave £100 to Meena (14 yrs) the youngest and only dependent daughter of Diya. While there they shared the Gospel with the family and other Hindus and they offered prayers for the community and more specifically to the family of Diya Bheel. Most of the Hindu community were open to praying with both Evangelists and both men have agreed to return when needed and to offer counselling and support.

British Asian Christian Association met with the family of Diya Bheel on 3rd January.  They presented her youngest daughter Meena with a £100 gift, to help cope with the lost of her mother’s income.  The Government have offered her a 5 Lakh Rupee (£1800) compensation package and funds should be released soon.

Diya’s husband died a year ago and it is believed he was killed by an occultist too, weeks before dying he complained that he was being targeted by occultists.

Diya had four daughters, out of which three have been married. Her eldest son Samar (25 yrs) was initially arrested and interrogated but later released without charge.

The family have asked us to report that they are happy with the overall police investigation, but refute that Diya’s brother Diya Ram, was involved in the killing of his sister.  Though this statement seems to fly in the face of police evidence we shall await to see how the investigation develops, but will offer free counselling and prayer to the family.

“People in the local community are extremely fearful.

“Ropoo and Loneo are not the only occultists in the District of Sanghar and women fear they will be the next victims.

“I was able to pray with the family of Diya Bheel and will remain available to provide counsel.

“The wicked men who perpetrated these crimes will have to account before God for their crimes.

“More immediately they face the judiciary of Pakistan.

“what more evidence does man need that sin leads to destruction?”

Witchcraft pervades in Pakistan and the  centuries-old practice is rooted in mystic Sufi lore which has traditionally been the domain of pirs (saints) and aamils (sorcerers).

Popular superstitions include writing verses of the Quran on paper and folding them into various patterns to be worn around the neck as a talisman, reciting the Quran and then blowing onto water or rosewater, which a follower then drinks, or asking followers to sacrifice a black hen or goat to ward off evils.

In Hindu communities especially within those of the Bheel tribe where Bhopas are traditionally priest-singers.  They perform in front of a phad—a long piece of cloth that serves as a portable temple, bearing various mantras and folk tales of local deities. Bhopas carry this phad along with them when invited by villagers to perform during times of sickness and misfortune.

Worse still, motivational speakers claiming paranormal knowledge are often invited to schools, colleges and universities. You can find numerous advertisements by spiritual healers, who specialize in warding off black magic, on social media and Pakistani roadsides.

“The ritual killing of Diya Bheel is a sickening reminder of the ancient practice of occult which still pervades in many rural regions of India and Pakistan.

“Diya joins a large number of victims most of them from India and most commonly from the Bheel Tribe. Read more (here).

“However, black magic pervades in Muslim communities and to some extent in rural Christian communities too [Rural Christians in Pakistan do not attend church but will be visited by Evangelists once a month or more frequently, and can be susceptible to witchcraft].

“Witch doctors are very powerful locally and are believed to have supernatural powers by the communities who they control through superstition and fear.

“No laws exist to enforce anti-witchcraft sentiment in Pakistan, a proposed bill was rejected by the National Assembly in August 2021.  Read more (here).

“More has to be done to stop the lies and influence of those who practice witchcraft across Pakistan, or ritual killings such as that of Diya Bheel will continue.”

A copy of the failed Prevention of Witchcraft Bill 2017, can be read (here)

Image of Ghafoor Masih who continues to fight bravely for justice for his murdered son.…

Nabeel Masih who four years ago as a Christian 16 year old was convicted of blasphemy in Pakistan is now free!