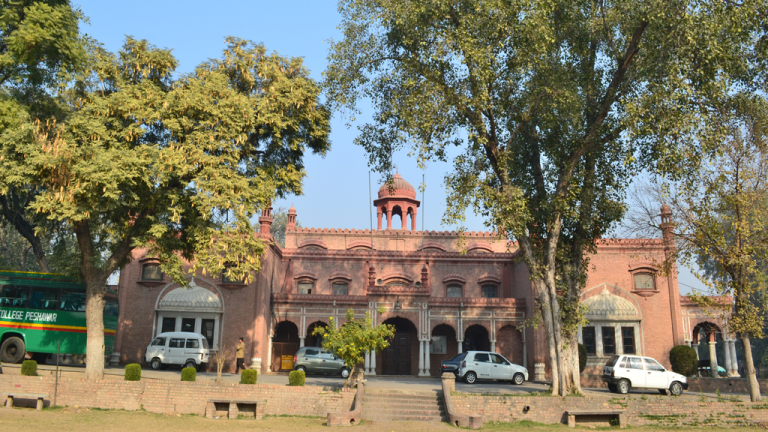 A Christian school which escaped the nationalisation programme of schools and colleges in Punjab Province instigated by Prime Minister Zulfikar Ali Bhutto in 1972, but was later usurped ilegally by a later Governor of Punjab, is struggling in the face of threats to release itself from the shackles imposed on it by the Government of Khyber Pakhtunkwa.  The principal of the college had complained of threats to kill his family should he not conced the school to the provincial government.

Edwardes College was established in 1900 by the Church Missionary Society (CMS) and was a private Christian College owned by Diocese of Peshawar, of the Church of Pakistan.

The Government of Pakistan nationalised all Christian schools and colleges in the Sindh and Punjab provinces under the Martial law Regulation 118 of 1971 (click here). At the time Christian schools were the highest performing schools in the country.

Edwardes College was not nationalised immediately as the Governments of Northwest Frontier Province (now known as Khyber Pakhtunkwa [KPK]) and Baluchistan which were under the Control of the National Awami Party in opposition to the ruling Pakistan Peoples Party, did not want to discriminate against Christians who were already living a torrid, unequal life in Pakistan. This meant that Edwardes College remained a church property.

In 1974 however, the Province’s new Governor Maj Gen Syed Ghawas who was from Pakistan’s People Party established a board of governors for the college under his chairmanship, without any legal backing from the Government.

From 2004 under the regime of President Musharaf many Christian schools were returned into the ownership of their original church diocesan bodies. For some colleges and schools, the battle for a return to the principle owners, the church, took much longer and the famed Murray College in Sialkot and Gordon College in Rawalpindi are still to win their freedom!

Edwardes College however was given a favourable decision a year later when Peshawar High Court ruled that the Provincial Governor established Board of Governors, was illegal. The provincial government of KPK filed a petition against this Judgement however delaying emancipation of the school, though the appeal was dismissed 18th September 2018.

The High Court further settled that, “Edwardes College Peshawar is a private educational institution funded by its own resources. It has independent financial as well as administrative status. Furthermore, it was adjudged that no administrative authority or power is vested with the government in relation to the administrative control of the institution or service matters of its employees”.

After the High Court Judgement, the Bishop of Peshawar of the Church of Pakistan, restored the College’s diocesan board of governors, but the KPK Governor’s Secretariat and the KPK Government are still not recognising their authority and are continuously interfering in operational aspects of the school. There is a very clear attempt to ignore the legal decision and to maintain administrative control over Edwardes College through their own Board of Governors chaired by Shah Farman the Governor of KPK.

Additionally, the College Principal, Ret Brigadier, Dr. Nayer Fardows told BPCA that he is being continually harassed and threatened. Anonymous threatening calls are being made to his office and threats have indicated that his family will be killed if he does not handover the school to the provincial government. Rather chillingly those making threats are stating that they are from the government without revealing their name or designation.

The Pakistani Christian community are worried that usurpation of Edwardes College is a ploy to take control of the last remaining Christian college in the KPK province.

“The threat is creating a sense of insecurity in the community and undermines the great contribution of Christians in the education sector of Pakistan.”

Christian missionary organisations created some of the highest performing schools in Pakistan, before the ill-fated nationalisation programme, they were the best source for a quality education. However, despite the vaunted educational history Pak-Christians find themselves amongst the most illiterate in the country. In 2014, Dr. John Patrick, revealed that:

These woeful statistics are caused by a great many factors including bullying and harassment at school, which can lead to death (click here), Christian girls being kept out of school for fear of abduction, rape and forced Islamic marriage (click here), and of course the inability to pay for school fees or lack of access to any local public school meaning that children will often have to work from a young age to support the family household demands. Even worse many enslaved Christian children in the notorious brick kilns and carpet weaving factories of Pakistan are in a generational slavery contract and required to work when able (click here).

For more in depth information on the unequal dynamics of the Pakistan Education system, you could purchase our book The Education System In Pakistan: Discrimination And The Targeting Of The ‘Other’ (here) .

In 1987 the Pakistani government passed an ordinance to give 20 extra marks to Muslim students who are Hafiz-e-Quran (Muslims who have read and learnt the Holy Quran fully). This ordinance is counter to constitutional assurances of equality and violates various international treaties and covenants, such as Article 18 of the UN Human Rights convention. It places Christians in a clearly disadvantageous position.

Former Christian schools like Kinnaird College are now run by Muslims and charge inflated prices meaning deprived Christians cannot aspire to a decent education in a college that should belong to their community. These colleges now have a 1% Christian attendance and have few if any Christian teachers. The subsidies these esteemed Christian educational establishments once had for the Christian community no longer exist.

“They lost their character, direction and lost their pre-eminent position to the newer more heavily funded Muslim establishments.

“The biggest losers were the Pak-Christian community who lost their sense of pride and contribution to the nation and access to a top-class education despite their poverty.

“Every effort must be put into preserving the Christian identity of Edwardes College especially as the legal battle has already been won.

“Attempts to eradicate the presence of Christians by ruining their institutions and heritage should be labelled as genocide by stealth – that’s what it is.

“Britain’s Department for International Development should be watching developments regarding this campaign especially as Pakistan is one of their largest aid recipients.

“A review of funding should ensure that minority education is given a sizeable proportion of future funding the existing disparity in education is a blight on Pakistan, but heaps shame on an ignorant DFID too.”

Learn the Quran and gain 20 extra university credits in Pakistan – what next to keep Christians and others disadvantaged?