By Editor6 November 2019No Comments 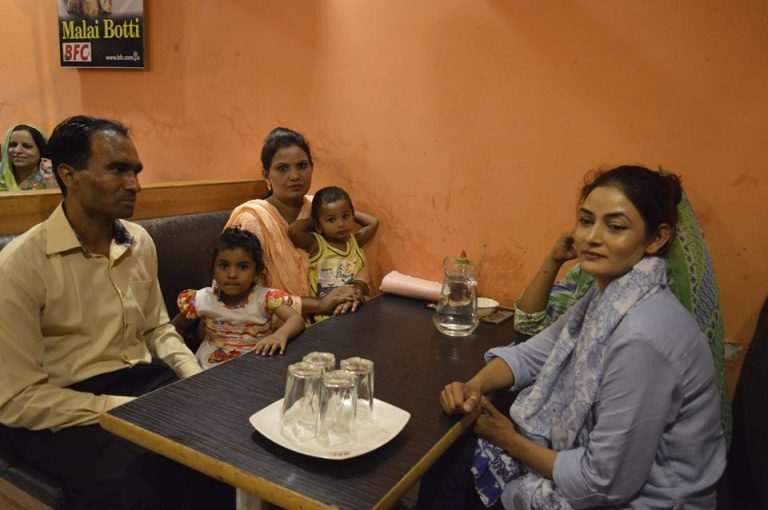 Juliet Chowdhry sharing a meal with Qaisor Pervaiz (a bomb survivor from the attack in Peshawar in 2013) and his family during a visit to Pakistan.

Yesterday Juliet Chowdhry a trustee for the British Pakistani Christian Association spent the best part of 3 hours at Ilford Police Station where she was required to submit a report on the despicable racially aggravated public order offence she was subjected to while travelling on a Transport for London (TFL) Route 150 bus, via bus carriage company Arriva.

The incident itself had occurred on Sunday 3rd November at around 6.30pm when Juliet had entered the bus via a stop opposite Fullwell Cross Swimming Pool.  Juliet paid for her travel and then found her route to the seats was impeded by the leg of an elderly white man estimated to be around 70 years of age.

At first Juliet assumed that the man was simply stretching his leg out to relieve some tension, he was elderly after all.  So to cause minimum fuss she simply sat opposite the elderly man on the elevated seats opposite the driver (the man was sitting on a single seat behind bus driver). These seats were Juliet’s preferred choice as she had only recently had a plaster cast removed from her right arm two weeks earlier, following and accident whilst on a short visit to Barking Abbey with a group of young people who attend the BPCA community centre. Her arm was both dislocated and fractured and required an incision for repair and Juliet was still feeling immense pain from around her elbow.

No sooner had she sat down than the elderly man began to insult, abuse and use expletives towards Juliet.  Words that he used were ‘go back to your own country’, ‘your people smell’, ‘women like you should not sit anywhere near me’, Paki and a whole range of disgusting expletives.  Neither original or intellectual but extremely stinging and painful to Juliet.

Juliet simply ignored him and looked directly forward, despite her anger. Feelings of shame and fear that begun to consume her emotionally but she remained on the bus adamant that she would not let him destroy her day, or force her off the bus.

Of course, as can be imagined the very fact that Juliet did not rise to the bait infuriated the man and he got louder and more base with his comments. However fortunately for Juliet the man’s stop arrived in short time.  In a last gasp effort to rile Juliet the man walked close to Juliet and said ‘disgusting creatures’ before alighting from the bus.

The abrupt nature of the insult caused a pang of embarrassment and ire in Juliet, emboldened by his leaving she said: ‘This is not your bus, it’s public transport’.

He simply continued his gross verbal attack on Juliet whilst exiting, however relieved that he had gone she simply mulled over what had happened.  She planned to make a complaint later and so when she got to the end of the route in Chigwell Row, she wrote down the licence plate of the vehicle and noted the time which was 6,55pm.

However, still in trauma, Juliet did not inform family members about what had happened.  She cooked their evening meal and went to sleep and only shared the details of what happened the following day (4th November), late in the afternoon.

On hearing the horrible insults the man had made to her mother, her daughter Naomi who is only 11 yrs of age, was enraged.  She expressed a desire to hit the man who had abused her mother.  Juliet calmed her down saying he is an elderly man and probably had some emotional problem.  Juliet and her family decided to make a complaint to the bus company believing the driver should have done more to protect her. Juliet did not communicate with the bus driver at the time because he was also a white male and with the heightened sensitivity that the trauma of the racial abuse she suffered she became quite fearful that the whole bus was against her. Moreover, Juliet has little experience of using buses.

Juliet’s husband incensed by the incident called Essex Police, the MET police, TFL and Arriva Buses all of whom noted the incident and the police have begun to investigate. Arriva buses have been approached by Mr Chowdhry for CCTV footage or images of the incident however even if they are not provided a request has been submitted for the audio-visual material to be retained till a request is forthcoming via the police.

Juliet Chowdhry, has only been living in the UK for the last 17 years and for her this was a horrid realisation of the intolerance and prejudice that exists in Britain.  She has said she realises that such hate exists only in a minority of people but the experience has still been terrifying and demoralising for her. She said:

“I was agitated for the whole journey, I kept thinking he would physically attack me and that he might move my arm which has not yet recovered from my original injury – it was a hopeless situation.

“The ferocity of the man’s verbal attack has left me traumatized – so much so I could not even share details of the attack with my family that evening.

“I kept replaying the unprovoked abuse in my mind and eventually after much weeping I wearily fell asleep.

“I did nothing to trigger his hate, moreover I chose silence over any reaction just hoping he would stop but he only became more livid.

“Neither the bus driver or any passengers made any attempt to help me, I was praying someone would extricate me from the danger he posed and just wanted the torrent of abuse to stop.

“He told me I smelt despite the fact I was wearing perfume – he seemed oblivious to his own odour.

“When he left the bus I still felt ashamed and was desperate to get to the end of my journey.

“I have come from a nation where Christians are persecuted and discriminated. Coming to England has been overwhelmingly refreshing and full of liberty -this has therefore been a shock.”

The police and Arriva buses have both stated that the CCTV system in the bus does not capture sound.  However, the camera will be able to catch the man’s leg movements and his entering into Juliet’s personal space as he left.  If nothing else BPCA hopes that a warning given to the man will prevent other vulnerable women from being verbally attacked by the male in this way.  It would seem for all intents and purposes that Juliet’s sling and frail state empowered the elderly man into expressing his innermost prejudices – with intent to cause emotional harm.  This type of evil opportunistic behaviour must be clamped down on especially in these strange days where Brexit seems to be increasing societal polarisation in the UK.

BACA will be writing to TFL and Arriva Buses calling for an enhancement of CCTV so that verbal abuse of this nature can be used to prosecute hate crime offenders. Moreover we are also asking for more vigorous training for bus drivers who must act swiftly to protect innocent passengers caught up in the hatred of malice-filled individuals like this man.  We are copying our letter to the Mayor of London Sadiq Khan who must do more to tackle hate crime and the safety of passengers on our public transport vehicles.  A return of community policing which led to a rise in police officers on buses would be one good step in the right direction.

Juliet is now finding it hard to use local buses again, she said:

“Despite the attack I know only a minority of people think and act this way. However that does nothing to quell my fear of using public transport.
My husband now drives me everywhere – till my arm heals from the fracture and I am independent again.

“I don’t know when I will feel brave enough to go back on a bus but I hope it will be soon as my recovery will take months and I hate being a burden. “

Visitors enjoyed awesome January at Meals for the Needy project

Stop the Crisis! Bring down ISIS!