By admin21 November 2018No Comments 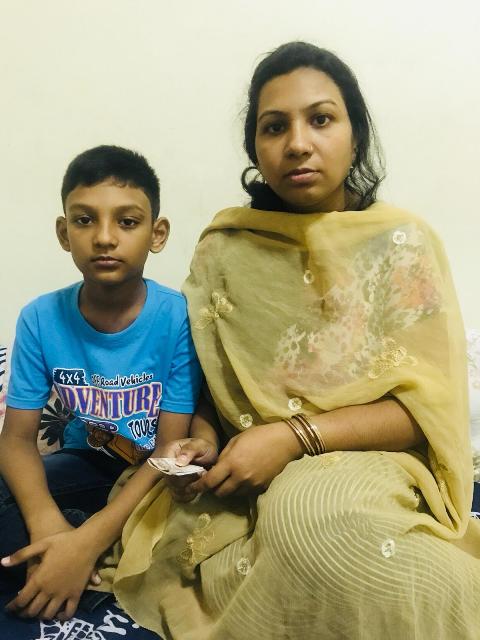 BANGKOK     – Crackdown! Thai Immigration Detention Centre’s torment drives desperate asylum-seekers back to violence in a Pakistan with heightened “blasphemy sensitivities” – Those UNHCR refugees who remain say, “It is difficult to survive.”

Pak-Christians held in the Bangkok’s Immigration Detention Centre (IDC) are beginning to be permitted bail. Asylum-seekers are trickling out of the IDC, and NGO’s are busy trying to help families survive the circumstances of their exile.

BPCA has been regularly sending food to IDC and has several families who evaded arrest who have required a stipend to survive without being able work or go out in public.

It was a great relief that one of the women whose bail we paid has been released with her two young sons aged 9 and 4 years-old. Samaira Adnan, who taught at our school for asylum-seekers that was raided on 9th October, agreed to tell us about her arrest and experience in Bangkok’s Immigration Detention Centre. A video clip of the part of the interview can be seen below:

Sumaira’s husband, Adnan Masih (35 years-old) was already in IDC upon her arrest and is still in IDC and separated from his young family despite being an approved UNHCR refugee. He was arrested in July with several others who were in Phuket for temporary work as cooks.  (click here)

Sumaira explained:
“My husband was very stressed inside the IDC but when I was arrested too, he became more tense and upset because we don’t have any relatives or any people who can send us food or supplies that we might need.

“My husband is also not well because two years go he had an accident at work so he does not walk well and now he has scars on his legs – he is in very bad condition.

The family has already been in Thailand three and half years and are UNHCR recognized refugees, which makes their incarceration by Thai authorities all the more concerning. Samaira said:

“I don’t know about when we will leave but we are refugees so hopefully soon we will find a new country. We need your prayers.

“We can’t return to Pakistan because it is very dangerous, the Pakistan police have arrest orders against my husband and our lives will be in danger. This is why we ran from Pakistan to Thailand where the UNHCR has declared us refugees

Sumaira describing the length of time she was detained and the circumstances of her incarceration, said:

“I was arrested the morning of the 9th October; My hearing court date was the 11th October; My bail pay on the 30th October; and I was released on the 16th November.”

“In a morning I woke up to make food for my husband because he is in IDC I was near the lift when I heard voices. They were all crying and screaming so I ran back to my room but then the police came and arrested all of us, took us down to the trucks and put us in IDC

When asked about the conditions inside the IDC, she said:

“Inside the Immigration Detention Centre the conditions are very bad. The people who are being held have no food, no money, no proper clothes, and no proper place to sleep. Many women with their children are kept together in one room without proper water and no space to move, when I think about that I feel depressed and I cry.

“They took us from IDC into one small room where we had nothing for eat. We waited a full day and then in evening they released us and we didn’t have money our lawyer Khijah help me with the taxi fee and gave me a little money for rent . We had nothing to eat during that time.

“Because Thai immigration rules always changed, we could be re-arrested but we don’t really know. At the moment I’m very happy because I’m free by the grace of God I’m really thankful to BPCA and Wilson Chowdhry.

“The authorities told us that they want to clear Thailand and not allow illegal people to come here. They said that they will not stop this crackdown till they have arrested any and all people who have come here for asylum.”

BPCA asked about the number of Pak-Christians Samaira saw in IDC and about how the families with children were coping: She told us the following:

“When I was arrested there were almost 60 to 70 kids total, but as of right now almost all refugee women have posted bail, so right now inside the IDC where there are only people with cases that are closed there are 15 or 16 children still in IDC.

“I do not believe the Thai government are directly trying to be mean to the kids and guards sometimes will even play with them, but growing children have physical needs. It is difficult to deal with life in IDC but we somehow survive.

A worried mother sits in anxious silence as a young girl peers sadly out through a caged vehicle rounding up Pak-Christian asylum-seekers to take them to IDC.

Because of concerns expressed by refugee sponsors in Canada, BPCA inquired about whether or not asylum-seekers with UNHCR recognized status were treated differently. Samaira said:

“In front of the UNHCR the Thai authorities had a hierarchy of treatment and treated refugees, asylum seekers, and people with cases that are close differently; but when they are not looking everyone is treated the same in detention because in the eyes of the IDC all these illegals are same. People with private sponsors are treated the same as the others and also have no bail.”

BPCA also asked about the situation with returnees and whether deportations are happening now. She answered:

“They are not deporting anyone forcefully but the horrible conditions can make living in detention, especially with a family very hard so some people gone back of their own accord, almost 20 families whose cases have been closed have left already and other are waiting for their tickets”

“Pak-Christians in IDC they have many health problems because inside there is no clean drinking water, as a result almost everyone held in IDC has a throat infection and most people have fever and itching. These are the most notorious health and sanitation concerns inside IDC.”

Many people may wonder if the current situation with Asia Bibi in Pakistan has had any impact on the Pak-Christians seeking asylum in Thailand and in response to this question Samaira said:

Crowds demand the hanging of innocent Christian mother Asia Bibi. What is waiting for any of the Bangkok returnees back in Pakistan?


Expressing her thanks Samaira said:

“BPCA has done so much for me to this day: first they help me a lot when I worked the BPCA school, they help me with wages and when my husband arrest they also help me to pay the fine to bail him out of the Central Jail.

“The bail costs 50,000 bath, which is too much for anyone in our situation to pay. I felt very relieved when I heard my bail was already pay and when I released I was overjoyed.”

“There seems to be no known reason for the delay in the payment and the release of the refugees, however they were somewhat out of the loop as to what was happening in Pakistan at this time. It is curious given that in desperation some became returnees as there were mobs of militants roaming the streets.

“We only hope that people in western countries will at least see fit to take the refugees who are already recognized by the UNHCR as Government Assisted Refugees.

“This would allow those who require further assistance to receive focussed attention to their refugee claims, and could perhaps elicit some empathy from the Thai authorities who see that the world cares about the displaced people in their country.”

If you would like to give to this need please (click here) and to designate to bailing out a UNHCR determined refugee please earmark your donation IDC BAIL.

Please (click here) to sign our petition to allow Pakistani-Christian Asylum-seekers to remain in Thailand but do not donate on this petition page the donation link is below.

British Pakistani Christian Association, continues to provide advocacy and humanitarian aid to Christians in Pakistan and people of Britain. We cannot do it without your help please donate by clicking (here)

These are some of the families currently being assisted by your donations.

Wilson Chowdhry, former Under Secretary of State for the Home Office Karen Bradley and Nissar…

Labour’s anti-Semitic revelations only the tip of the iceberg says Nissar Hussain a Christian convert from Islam persecuted for 15 years in Bradford!