By Editor8 October 2019No Comments 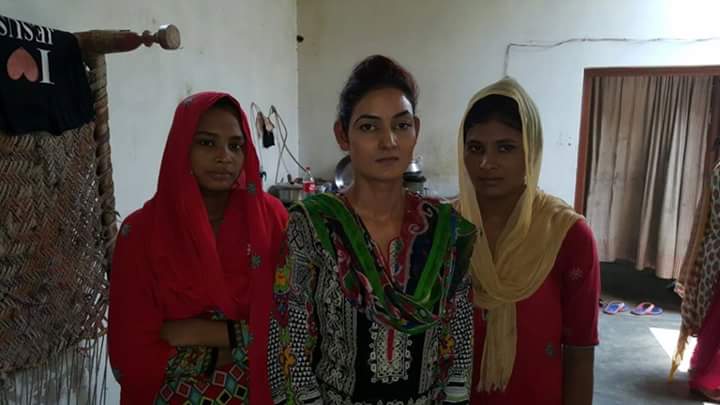 Juliet Chowdhry Trustee for the BACA (centre) meets with sisters Sherish and Farzana who survived a brutal gunpoint gang-rape.

BPCA has expressed a number of concerns to the International Development Committee parliamentary inquiry team examining the nature of British aid to Pakistan. In a submission prepared by Desmond Fernandes, a

former senior lecturer at De Montfort University, BPCA has highlighted the way in which many Department for International Development (DFID) educational aid-linked projects in Pakistan have not been designed or implemented in an effective, transparent or publicly accountable manner. We additionally hope that these concerns will be taken on board by Alok Sharma, the newly appointed international development secretary.

Children from religious minority groups in Pakistan (inclusive of Christians, Ahmadi Muslims and Hindus) often have a very real and credible fear in schools of being subjected on a daily basis to

violence, death threats, being abducted and raped, being possibly forced into below legal-age marriages, being forcibly converted and being unfairly expelled from school due to discriminatory grounds linked to their religious orientation.

Additionally, many face the threat of:

● being segregated in apartheid-like conditions (e.g. being seated separately whilst teaching in classrooms or whilst eating during lunch-times; not being allowed to use washrooms/toilets/the safe drinking water facilities in schools lest they ‘pollute’ them for Muslim students)

● being subjected to a host of other discriminatory actions that create ‘mental harm’ and ‘unsafe environments’ for the children from minority groups.

Despite this, we have noted that DFID does not consider it to be ‘best practice’ to insist that all these identifiable above discriminatory actions should be explicitly banned from taking place in any of its education-funded schools and linked schooling projects and programmes in Pakistan.

We have also pointed out to the inquiry team the following shocking and scandalous findings:

● Nadia Naviwala: “The education programme in Punjab became DFID’s largest programme in the world. Pakistan is also now the largest recipient of DFID funding in the world … Unlike USAID, DFID does not ‘follow their dollar’, in other words, track how the Punjab government actually spends its money. DFID accepts the risk that it could be diverted… According to a recently released [2016] World Bank assessment: ‘Despite over a decade of focused support to large scale education programmes and what some have termed ‘cutting edge’ [privatisation-linked] reforms, education outcomes, including enrolment rates and learning outcomes in … Punjab are only marginally better than those in the rest of the country. Gains made over the last decade have stagnated, despite increased sector financing by the [government of] Punjab and support to the sector by the World Bank and other Development Partners (DPs)’”.[i]

● “Another scandal has arisen after DFID, in an attempt to avoid some of the problems involved in working with state governments, turned to giving money to private companies running non-government schools. DFID has since found that women teachers in ‘low-cost private schools’ are paid sweatshop wages of just 70p a day – less than a quarter the legal minimum. Civil servants at Ms Greening’s [DFID] department warned two years ago that there was a high risk of damage to the Government’s reputation if news of the illegal wages leaked out. But the project was [still] allowed to go ahead [despite such knowledge] because it was judged good value for money and officials wanted to be able to claim quick successes to justify the huge aid budget … In Punjab, these schools are funded through the Punjab Education Foundation (PEF), which receives £68.7 million in UK aid … But an academic study of the programme co-authored by Professor Roy Carr-Hill, from University College London, and his Pakistan-based colleague Ali Murtaza found that the way areas were selected to receive UK help ‘almost certainly means the very poor are excluded’. They concluded that private sector involvement increased the ‘likelihood of corruption’”.[ii]

● The Lord Bishop of Coventry in a recent parliamentary debate queried DFID’s project effectiveness when he stated, after informed evaluation and appraisal, that “the epact evaluation of phase 2 of the Punjab education sector programme deems: ‘Inequities in educational access and attainment are persisting’. It recommends both that equity of access, including socioeconomic status, disability and gender, are mainstreamed and that systems are devised for assessing the success in doing so. Will this advice be applied to future DFID programmes? Does the Minister agree that that task cannot be done without building in some element of minority community criteria? Is the current programme [really] hitting the spot?”[iii]

● Lord Alton, as co-chair of the All-Party Parliamentary Group on Pakistan Minorities, recently with two members of the Commons “saw firsthand the appalling conditions in the apartheid-style ‘colonies’ in which many from the minorities are forced to live. We saw families living in hovels with dirt floors, in shacks without running water or electricity; little education or health provision; squalid and primitive conditions – all completely off the DFID radar … We heard first hand testimonies – including horrific accounts of abductions, child marriages, rape and forced conversions … [Founding state] principles [aimed at protecting religious minorities from various forms of persecution] have proved worthless … Over the past decade, £2.6bn of British aid has poured into Pakistan – on average, that is £383,000 every single day. But failure to differentiate how and where we spend this money leads DFID to say that it has no idea how much of the aid reaches these destitute, desperate minorities”. [iv]

We also recommended that the disturbing findings presented by Bethan Staton and Farhan Bokhari in their 24 August 2019 Financial Times article [vi] be further investigated: “Buildings in more than nine in 10 schools in Pakistan delivered under a £107m project funded by the UK’s DFID are not fit for purpose, leaving 115,000 children learning in makeshift classrooms as a new academic year begins. Internal DFID documents seen by the FT show that new and renovated facilities, including classrooms and toilets, at 1,277 of the 1,389 schools covered by the UK Aid programme are potentially affected by structural design problems …

“The problems affecting the project … put the school buildings at risk of collapse, especially those in areas prone to earthquakes. Despite two separate assessments of the project dating as far back as 2016 about the quality of the building work and similar concerns raised by local authorities in Pakistan, DFID allowed IMC to continue to run the project. The crisis finally came to a head in June when a third safety report commissioned by DFId found flaws in IMC’s construction methods and designs. The UK government” only at this late point “told local authorities to close all the new facilities at the 793 schools where work has been completed so inspectors could identify which required remedial work. The decision leaves an estimated 115,000 students, who returned to school this week, facing months studying in makeshift accommodation, including tents and verandas”.[vii]

As noted by Stephen Twigg, chair of the House of Commons International Development Select Committee: “The allegation that there are thousands of DFID-funded classrooms that are both inadequate and fall short of safety standards is doubly alarming … It raises serious concerns about value for taxpayers’ money and, just as importantly, for the education of tens of thousands of children who should have a safe and secure place to learn”.[viii]

Indeed, as pointed out by a development professional with knowledge of this educational initiative: “This will mean children are sitting outside in high temperatures, in overcrowded rooms, or with multiple grades learning together”.[ix]

This IMC-led project was allowed to proceed despite the company’s troubled history. As documented by Staton and Bokhari: “The company … was originally contracted in 2014 to build 31,084 classrooms as well as other facilities in more than 10,000 schools, under a £184m contract that was part of a bigger DFID programme … But more than four years into the partnership, the project has been scaled back to 5,618 classrooms — just a fifth of the original number — after IMC admitted it had underestimated the costs. IMC said it would deliver th[is] much smaller project for [the still substantive sum of] £107m. The problems with IMC’s work were well documented by engineering experts on three separate occasions. According to the internal correspondence, the warnings started three years ago … [and] two assessments [at an early stage] flagged that the classrooms did not comply with local building codes, failed tests for earthquake safety and were generally of poor quality”.[x]

Apart from these significant concerns, we also noted (citing sources) the manner in which publicly unaccountable decision-making has led to DFID promoting major educational aid initiatives that have problematically shaped Pakistan’s national and provincial development and educational strategies in linguistically genocidal and other detrimental ways. Such dysfunctional approaches do not enhance the Pakistan government’s capacity to move towards attaining several key Sustainable Development Goals (including those relating to SDG’s 4.1, 16.5, 16.6 and 16.7).

BPCA regularly writes submissions for UK Government inquiries and for international reviews such as the Universal Periodic Review of Pakistan and other nations by the United Nations.  Please help us continue this valuable advocacy work by donating (here).

Christian politician assassinated by own bodyguard

Hush, hush on Asia Bibi’s asylum as countries shirk at doing anything to “inflame tensions”

CHRISTIAN MOTHER OF 5 CONDEMNED TO EXECUTION FOR DRINKING WATER…