By Editor21 September 2022No Comments 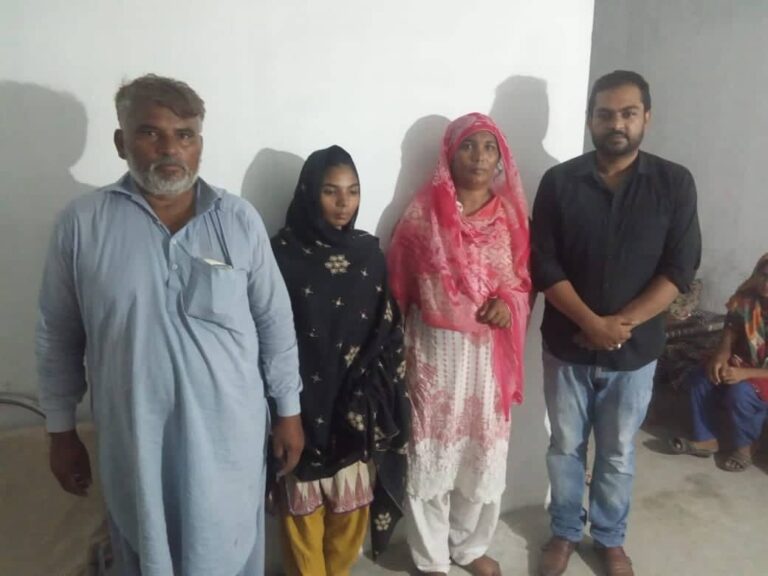 A Christian girl was abducted  from her home on 17th July 2022 from the village of Haloki in Kasur.  The kidnapping took place at around 5pm while Muqadas Labha was washing dishes and many neighbors witnessed the abduction causing alarm in the community.

Later it was discovered that Muqadas Labha (15 yrs) was abducted by Muhammad Naveed (35 yrs) from Okara district, 150km away.  He had an accomplice name Muhammad Babar (32 yrs) who was also from the same village  as Muqadas – Haloki.

The abductor was known by the family because he had been providing work experience to Muqadas’s brother who was learning to be a welder.  Samina Bibi (52 yrs) the mother even provided food for this man regularly who she say’s she treated like a son.

Begrudgingly Police from Haloki Police Station  registered an FIR though they omitted Muhammad Naveed’s name.  However BACA intervened and assertively challenged the Deputy Superintendent to include the name of the culprit so the investigation could continue more effectively. Read more (here)

After BACA’s intervention Haloki Police station officers stopped ignoring the families and began a more fervent investigation.  They began arresting his friends and relatives and interrogating them. Police were beginning to get closer to identifying the location where Muqadas was being held captive.

Police began to regularly call Labha Masih to give reassurance which gave him hope. However, they did not share any further information. Our field officer and solicitor also travelled to the police station with Labha Masih regularly, as we kept up the pressure on the police to ensure Muqadas was returned. At the time Labha Masih, said:

“I have been praying constantly and asking God to help me.

“I was desperate to see my young daughter again it has been tearing our family to shreds to think of the situation she was in.

“I was grateful for the support of BACA – this would have been a real challenge for me on my own.”

Lahba Masih, our solicitor and field officer kept pressure up by calling the investigation officer DSP Abdul Rasheed for updates frequently, but it was not till a month later that his daughter was found.  When she was located it was not directly through the police either.

On 18th August around 6 o’clock in the evening Labha Masih received a call from an uknown number. When he answered the man on the phone stated that he was Ex-Chairman of Varpalkay local council, named Muhammad Nawaz.  He informed Labha Masih that Muqadas and the abductor Muhammad Naveed were in his custody after Mr Naveed had confessed his crime.

“Mr Naveed came to me and confessed his crime of the abduction of your daughter.

“As soon as I heard this I kept both your daughter and Naveed with me in my custody.

“Please come to my home to receive your daughter back and take her into your care.

“Mr Naveed has agreed to stay in my custody with your daughter until you arrive only if you agree to terminate your FIR with Haloki Police Station.

It was very obvious that Police had put so much pressure on Mr Naveed that he had decided to terminate his attempts to forcibly retain Muqadas in a marriage.

Mr Masih called our operations manager immediately and told him about the situation.  Desperate to see his daughter again and not willing to take chances he refused to take our solicitors, which was a condition that Mr Nawaz put across to Mr Masih.

Our field officer called Mr Nawaz immediately to arrange a meeting, which was scheduled for the next morning at 11am.  Mr Masih was accompanied by our operations manager and field officer who attended the meeting at which it was agreed that Muqadas would be taken to Haloki Police Station (2.5 hours away from Mr Nawaz in Verpalkay), where police officers had agreed to transfer Muqadas across to her parent and quash the FIR in the presence of Mr Masih.

At the Police Station after Mr Masih signed a termination of the FIR and agreement to not pursue Mr Naveed. after signing the papers Muqadas  was returned and though visibly shaking and crying, she hugged her mother tightly on her return. It was a heart-wrenching moment.

Parents of raped teenager Muqadas thank BACA who applied pressure on Halloki police that resulted in her abductor agreeing to return their daughter.

Muqadas told her parents about the brutality of her kidnap,  how she was forcefully converted and then married to Muhammad Naveed.  They have all wept for many day and have been consoling one another.  BACA has provided a supportive structure and so has the local church.  The family have moved on and have expressed no desire for revenge or any further attempt at getting justice, which would be impossible now as they signed an agreement under Pakistan’s notorious Qisas and Diyat Laws stating that the perpetrator has been forgiven.  Under this law usually the culprits would pay a compromise payment but BACA can guarantee for the family that they have not taken a penny from the culprit, their main and only priority has from the outset been to get their daughter away form the rapist and abductor and back into safety.

Muqadas has been very clear that Mr Nawaz protected her while she was in his home.  When Mr Naveed brought her to his home he was trying to insinuate that Muqadas and he had eloped and willingly been married and converted.  Mr Naveed had tried to get Mr Nawaz to intervene with the police and get their to terminate their enquiry.

Mr Nawaz however took Muqadas out of the clutches of Mr Naveed and asked her in private and safety if she had willingly married with Mr Naveed.  When she told him that she had been abducted, raped and forced into Islamic marriage she says that Mr Nawaz cried and told her he would protect her.

Mr Nawaz then told Mr Naveed about the statement from Muqadas, who began to shout and holler that he had every right to take his wife who had converted to Islam, and leave the property.  This is true in Sharia law and Mr Nawaz is very aware of how difficult it is to remove a Christian girl from the clutches of rapists who use rogue Islamic marriage as a tool.  He therefore threatened to tell Police of the whereabouts of the couple and to get his lawyers to prosecute Mr Naveed.  At this point Naveed caved in and agreed to let Muqadas return by annulling his marriage if the parents agreed to drop charges against him.

“God has taken me out my despair

“I thank Him from rescuing me from a evil monster.

“I am back home with my mum and dad and am grateful that they never gave up and continued to challenge for my return.

“Even when threatened with death they trusted God and their faith has brought me home.”

“Our God is a great God.

“The devil tried to destroy our family but he was defeated.

“I have my daughter back and she is safe now.

“I will praise his name every day that I live.”

“This was a very traumatic attack on a very young girl.

“She will need some time to heal and her family will need to be strong.

“They are getting the right support from friends, family and the church and they are strong believers – Gid will see them through.

“We will remain in contact with the family and will provide support and help where we can.”

“Many of you may not think justice has been served and your are right.

“But getting justice in Pakistan where Sharia Law (Islamic Law) drives the judicial system, is difficult at best.

“I can provide numerous examples where Christians girls have been forced to live in Women’s Protection Centres where they are abused and those who are forced to stay in these forced marriages.

“Many of those women have been sold into slavery or prostitution.

“The fact that this young girl has been rescued from the clutches of a pernicious man, has to be celebrated.

“He may not be punished for this crime now, but there is a divine court awaiting him.

“Muqadas can now restart her life and we rejoice that she is free of what would have been a lifetime of pain.”

In 2014 Muslim NGO ‘Movement of solidarity and Peace’ estimated that 700 Christian girls per year are forcibly married after abduction and Islamic conversion (click here).

British Asian Christian Association was the first Christian charity to help free a Christian woman from the clutches of a Muslim rapist and forced Islamic marriage. Fouzia Bibi was freed after a tumultuous rescue operation in which her family first returned her to her rapist because of threats that their sons would be killed. In the end Fouzia had to file for a divorce and not an annulment as her age meant she was legally married despite being under duress. The rapist was never brought to trial for his crimes but freedom was won albeit on a much longer trajectory (click here).