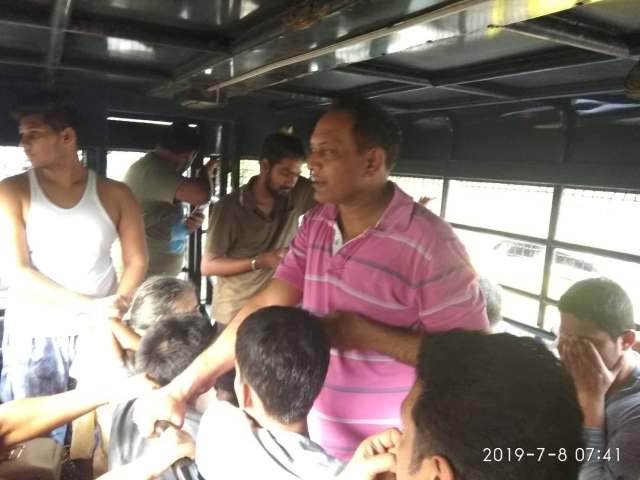 In a raid on asylum seekers the extent of which we have not seen since 2015 48 Pakistani Christians were arrested. Proud of their achievement Thai Police described the positive clean up operation to a local media group, saying ‘Children are among 48 Pakistani nationals rounded up by Bangkok Immigration police this week at an apartment in the Bang Na district. Most had overstayed their visas while several didn’t have any travel documents at all.’ Thai police authorities also stated that they believed that none of the victims holding United Nations High Commission for Refugee (UNHCR) cards held UNHCR approved refugee determination status (click here).  BACA later confirmed that all 8 and an additional 6 bringing the total to 14 individuals had passed assessment and were awaiting third country asylum.  This false statement is believed to be a national ploy to alienate Thai citizens from innocent Pak-Christians in Thailand.

The highlighting of children arrested in these raids has been condemned by the beleaguered Pakistani Christian community hiding in Bangkok and the many NGO’s supporting them.
At approximately 7am on 8th July 2019 an immigration raid took place at the Bearing Soi 7 Bangkok, Thailand. This venue has been fortunate to have been ignored during previous asylum crackdowns and police have stated that some of the visa overstayers have been in Thailand since 2013 – illustrating how many have become accustomed to the dishevelled deprived life in Bangkok and choose such an existence over a return to their homeland.

Christians pray for respite from the hatred they sense towards them in Thailand.

Around 10 families were taken into custody of which 14 adults were male and 12 female – a further 22 children were arrested of which the youngest was only 8 months old. Fears around the safety of the lactating mother and child have been expressed to Thai authorities via the BACA as questionable nourishment in Bangkok’s brutal IDC will limit milk production and baby-care items are not accessible unless provided by NGO’s (BACA has stepped in to provide baby-care essentials). Three of the arrested asylum seekers are of pensionable age and on medication – one of whom Mr Sadiq Masih is 76 years of age.  Considering 11 prior deaths of Pakistani Christians in the IDC or as a consequence of incarceration the last to die in the IDC was Patras Masih in 2017 (click here), whereas Asloob George died in Pakistan only weeks after being forced to take voluntary assisted return for treatment for a health condition he was refused treatment for in Thailand’s brutal Immigration Detention Centre. Read more (here)

BACA has been counselling those arrested and their friends and families all of whom have been shocked by the violent nature of the recent arrests, which included doors being smashed and man-handling of victims many of whom were wrenched from their beds and hiding places quite brutally.

Armed police with immigration officers broke down doors of flats to get inside asylum squats in which families of up to seven shared a room as they tried to eke out an existence – far from their original homes in Pakistan where they are too frightened to return.

14 people have acquired Refugee Status Determination via the United Nations High Commissioner for Refugees (UNHCR), but even then these individuals are required to remain in the brutal Bangkok IDC as Thai authorities have not signed the 1951 UN Convention for Asylum or the 1967 Protocol. Worse still in the false press release in which Thai police authorities extolled the raid for their capture of children, they have also falsely stated that none of those arrested have live refugee status. In addition Thai police have failed to mention that 3 other Pakistani Christians were initially arrested but set free after it was discovered that they had live visa status. It seems that there is a corrupt intent to alienate the wider Thai community against these struggling and exploited innocent asylum seekers.

Mrs Arshad Masih was arrested and released once police realised she had a valid visa.

The actions of the Thai Authorities have long been condemned by leading politicians including Lord Alton a peer in the UK House of Lords (click here). Despite his and other global condemnation their appetite to hurt these innocent Christians refugees shows no sign of dissipating. In fact the Thai authorities like the British Foreign Office often deem persecution non-existent in Pakistan with whom they have very cordial relationship. The extent of their adversity towards Pak- Christians is manifest in their ignoring of UNHCR approved refugee status in their bid to remove these untouchable minorities from their country.  Pak-Christians are viewed as opportunistic leeches though most are exploited by Thai citizens in low paid, high instensity labour black market jobs – even then Pak-Christians work tirelessly to feed their families.

The Bishop of Truro recently finalised their report on Global Christian Persecution but failed to highlight the need to improve the interactions of nations like Thailand with asylum seekers, though the report does shed better light on the true nature of persecution of Christians in Pakistan (click here) .

Speaking with Thai Authorities we have been advised that two of the mothers with young children who hold valid UNHCR refugee status, will ‘hopefully’ be allowed asylum in a month’s time. Shumaila Daniel (25 yrs) who is the mother of David Daniel (8 months) and Farzana Sam mother of Lydia (9yrs), Cyril (7 yrs), Joshua (5 yrs).

“This latest series of raids illustrates how little love is lost between those seeking refuge from persecution in Thailand and the venomous Thai authorities who are even willing to espouse negative propaganda against already victimised communities, to preserve their nation from long-term outsiders.

“Thailand has one of the hardest citizenship programmes of any nation though their tourism visas are often inexpensive and easy to complete.

“A nation known for it’s avarice and vice that is steeped in policies of protectionism should not have the international standing that Thailand has attained.

“Global politics is sadly bereft of humanitarian agenda and for countries like Thailand this gives opportunity to maintain their morally corrupt status quo.

“Even then we urge Christians to pray for Pak-Christian asylum seekers in Thailand and to challenge their politicians to urge Thailand to adopt UN Conventions for Asylum.”

To free these women when the bail is opened we need to raise 50,000 baht (£1300) for each adult as children are released for free. The total cost to BPCA will be £2600 but we are also required to pay for these mothers once free as their husbands will be kept in the IDC. Costs to support these mothers will be around £100 per month until their future is settled. A slither of hope for these victims is that the UNHCR will now be working around the clock to find a suitable exist country for the refugees in IDC who have been waiting years for their placements. We have also agreed to cover all necessary baby-care items to Shumaila until she is set free. If you can help any aspects of our humanitarian appeal for these asylum seekers/refugees please donate by clicking (here)

Excerpt from The Targeting of “ Minority Others” in Pakistan “Asylum Seekers”