By Editor9 November 2013No Comments 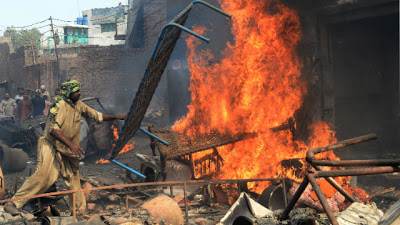 In yet another case of blasphemy allegations being used as a pretext to attack whole Christian communities, a mob of two to three thousand burned close to a hundred Christian houses in the Badami Bagh district in northern Lahore earlier today.

The incident started when a Muslim man, Shahid Imran, accused a Christian sanitary worker, Sawan Masih (a man in his mid 20’s aka ‘Bubby’), of blasphemy.

Imran claims that his friend Masih, twice over the last two days made blasphemous comments about the Islamic prophet, whilst Masih is reported as saying that the accusations came after he, Imram and another friend got into an argument whilst drinking. Imram revealed his allegations to one Shafiq Ahmed on the night of Thursday 7th March. Ahmed armed himself with a knife and went to Masih’s home to try and kill him, but Masih’s relatives told him that he wasn’t there, and that they would hand him over when they found him. Ahmed went away after this.

The next day, Ahmed gathered some men and again went to search for Masih, and they were joined by many other Muslims after Friday prayers. The police investigated and initially found that the allegations were false. However, the gathering mob began to get out of control, with about two thousand pelting Christian homes, forcing about 150 Christian families in the Joseph Colony to start fleeing their homes. The mob could not find Masih, but found his 65 year old father, Chaman Masih, and beat the pensioner black and blue. The mob dispersed later that evening, after the police promised to charge Sawan Masih with blasphemy.

The police arrested Masih and charged him with blasphemy. However, this morning (Saturday 9th March) an even larger mob of about three thousand attacked and drove all the remaining Christians in the area out of their homes and looted and burned the houses, with the police standing by and doing nothing.

Reports vary as to how many homes were affected, with official sources saying twenty five, but other reports saying close to a hundred, and some activists reported two small churches, 18 Christian-owned shops and 160 Christian homes caught up in the burning. The car of a Christian pastor who arrived on a fact-finding mission was also burned, although he managed to flee. There are currently no reports of Christians being injured, although a number of police were lightly injured by the stone throwing mob. The mob dispersed only after a local Islamic cleric promised action would be taken against the ‘blasphemer’.

British Pakistani Christian Association (BPCA) chairman Wilson Chowdhry said ‘This sad incident, just days after we launched our seminal report on the treatment of minorities in Pakistan, reinforces the need for a sea-change in Pakistani society. Once again, a Christian is falsely accused, yet still charged by police under mob pressure. This and other incidents mean that we will be updating the report before it goes out on a general release of our 2nd edition
later on.’

Christians of Islamabad staged a protest against this latest attack (Click here).

The British Pakistani Christian Association launched a major academic report, ‘The Targeting of ‘Minority Others’ in Pakistan’ at the House of Commons on the evening of Tuesday 6th March, at a meeting hosted by Pendle MP Andrew Stephenson. The 500 page report, authored by academics and activists, documents
a number of ongoing genocides in Pakistan, including demonstrating state complicity.

Our officer in Pakistan will be visiting the victims of St Joseph’s Town, Badami Bagh, to assess how the BPCA can assist. We have opened a disaster recovery fund and if you would like to donate to it, please use the  details found (here)

You can also send your contributions by cheque payable to;

Alternatively should you wish you can pay by BACS, direct debit or standing order by paying into the following account details:

All donations should be referenced: St Joseph’s Disaster Recovery Fund.

Pakistani Christian convert from Islam forced out of home by persecution in UK!