By admin19 February 2018No Comments 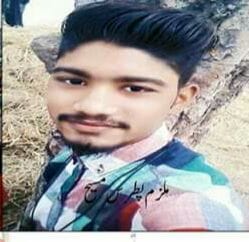 Some images lost after transfer of our website from the now terminated Adobe Business catalyst platform to WordPress in September 2021.

Today a Christian teenager from Dhair a village in Shahdara town, Lahore has been accused of blasphemy by local Muslims after he lost his phone a few days back and an unknown person added blasphemous content to his FB, the 17 year old youth named Patras Masih alleges.

A local Muslim man named Muhammad Awais took matters to the police and demanded a First Information Report (FIR) and local police duly obliged, registering a crime of blasphemy under section 295c of the Pakistan Penal Code.  After registering FIR 174/18 police initiated an investigation and began a search for Patras Masih, who could not be found at his property.

In the meanwhile news of the blasphemous images posted on Patras Masih’s FB page stirred up great anger amongst local Muslims and hundreds gathered outside Patras Masih’s home from 5pm (12pm GMT) on 19 February 2018,  The demonstrators called for Patras to be lynched and threats were being made that Christian homes would be burnt down if Patras Masih was not given up to the authorities or the mob for retribution against his blasphemy.

Local police lost control of the situation as the numbers gathered in the mob grew beyond 3000.  Slogans and chants shouted by the the mob began to increase in volume and pressed for the young man to be beheaded even though at that point no charges had been laid. One man held up a sign saying, “Wicked Christian Patras should be punished for committing blasphemy!”

Road blocks were secured by police as part of a wider cordon to prevent people entering into Shahdara town as police set about trying to calm the situation.

As threats that the Muslim mob were gathering petrol to burn all Christian homes in the area increased, many local Christians chose to flee Shahdara Town.  Forced to leave their properties behind, the frightened families sought temporary shelter elsewhere and reports of looting of vacated properties have been received.

Traffic was blocked and our officer had to travel 2km on foot to get close to the site of the incident.  We will update this story every hour.  Please sign our petition calling for an end to the draconian blasphemy laws of Pakistan (click here)

“This story illustrates the daily danger faced by Pak-Christians and the speed at which a lynch mob can precipitate even prior to charges being laid. Even the normal event of losing one’s mobile is cause for great fear among vulnerable minorities. It is hard to imagine how anyone could use the opportunity of a lost phone to do this to another human being – but this is Pakistan and crimes like this are all too common.

“We are making our way to the family of Patras Masih and hope to be able to provide them with shelter and legal assistance, but for now our search for the family is being thwarted by a huge police presence.

“The situation may yet get worse especially due to the growing number of incensed Muslims baying for the blood of Christians as they seek revenge for the presumed insult to their faith. At the moment all Christians in the area are under imminent threat of violence and many report they are hiding in their homes.

“Even a growing police presence does not seem to be restoring calm and every Christian across Pakistan is praying for an end to the madness.”

Close to 6pm (GMT) brave Patras Masih surrendered himself to local police in order to restore peace and save the lives of many of his Christian community that were increasingly coming under threat. News of the captivity of Patras Masih was shared by local police with the blood-seeking Muslim mob who had formed initially outside the home of Patras Masih.  The news seemed to calm the situation down significantly and peace was restored in the evening,  However none of the local Christians who had fled their home have returned yet as hatred still simmers.

BPCA will be offering any help they can to Patras Masih and his family.  We have initiated an appeal to help the family please donate here if you would to help us serve this beleaguered family (click here)

Here is a video taken earlier today as the mob was forming slogans were calling for him to be lynched and the poster calls for him to be beheaded Taliban-style.
The dominant sign in the footage displayed says, “Wicked Christian Patras must be punished for committing blasphemy!”

An Indian Pastor has been attacked by a knifeman sustaining severe wounds to his chest,…

Homeless people queue in the cold for 1.5 hours to be first to obtain our food