Nissar Hussain Forgives Attackers Who Hospitalised him for Quitting Islam

By Editor15 December 2015No Comments 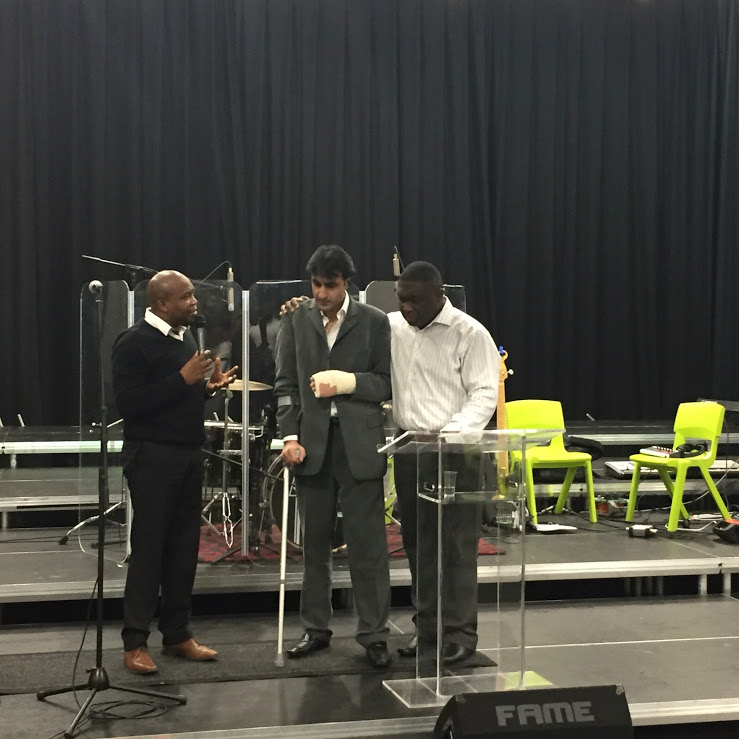 Nissar Hussain, 50, a Christian convert from Islam, was invited to speak to Christians at the Eden Christian Centre, High Road, Ilford about his life and the ongoing challenges and trials he has faced as a Christian.  Nissar described how he and his family have lived through the awful experience of persecution simply because they chose to quit Islam. Nissar’s tale is very different from most persecution victims as he was not persecuted in a rogue state, but right here in the UK, where most of us believe the law and our authorities can protect us.

Mr Hussain was brutally attacked and beaten with a pick-axe handle during a horrendous 2 minute ordeal, after two men lay in wait in a car ready to pounce on him, in his home town of Bradford.  This attack left Mr Hussain hospitalised for 11 days as he recovered from a fractured left hand and left knee
cap. But this was only the latest in a string of attacks that have left Mr Hussain and his family terrified for their future.

At the church service presided over by Pastor Bryon, Mr Hussain described his conversion and talked about the severe beatings that he received when he was young from his father and madrasa teacher for not learning the Koran, which often left him seething in anger.  However at the age of 16 Mr Hussain was moved by the transformation of a former racist punk rocker, who had lost his mohican and began to cover his tattoos after his own radical conversion.

During a discussion about the change Mr Hussain showed an interest in Christianity, which led to him being gifted a Gideon’s new testament, and while reading the Gospels secretly at night in his home he decided to give his life to Christ.  For all intents and purposes he was a Christian pretending to be a Muslim from this point.

One night however Mr Hussain fell asleep while reading the bible and left it laying on his chest.  He woke the following morning to the screams and hollering of his mother who raged against his reading of a forbidden scripture. To avoid conflict he chose to give up reading and following the bible despite his belief that it was the Word of God.

Disaster struck many years later in 1996 when his brother, who had also converted to Christianity, died suddenly at the age of 29.  Mr Hussain was required to take his body back to Pakistan and during that time he realised life was too short and decided to give his life back to Jesus.  From that moment on he lived his as a Christian and went to church every Sunday morning and evening.  However one day his wife Kubra confronted him about whether he had been going to church, when he told her the truth her reaction broke him in pieces.  Kubra took his son from his arms and told him never to come near her children or herself again.  Kubra told his family that he had converted to Christianity and after attempting to bring him back to Islam they disowned him for converting, which was a time of great sorrow for Mr Hussain.

Members of his church persuaded him to bring his wife to church and introduced the Hussain family to other Pakistani Christians over a period of time.  Until this point having been brought up by a strict Pakistani Muslim family they had not even been told that Christians live in Pakistan and Nissar assumed he was the only Pak-Christian. Slowly his wife began to listen to the word of God and one day at a service, to the surprise of Mr Hussain, she too gave her life to Christ at an alter call.

After a few years of being a secret Christian Mr Hussain could no longer live that way so he told one of his close Muslim friends about his conversion.  To his surprise his friend told him never to speak to him again, worse still he told the entire Muslim community of the conversion.  Leaders from within the community visited Mr Hussain trying to bring him back to Islam peacefully at first, but then came the threats of violence.

Threats turned to attacks and Nissar and his family were forced to move after a series of vehicles being vandalised, his car being burnt and a severe arson attack on an empty home next to him that filled his home with smoke and almost resulted in the deaths of his family.

Accustomed to life in Bradford the family chose to stay in the same city but moved to an area that had a large indigenous white population. Three years later a producer for a Channel 4 Dispatches programme met with Nissar and asked for an interview with him for a documentary on the persecution of apostates in the UK as they had discovered the existence of a growing social malaise.  Nissar agreed to join the programme but was disappointed when he learnt that only he had shown his face and used his own voice, every other participant had chosen anonymity. Only days later Nissar’s persecution began again.

This year alone Nissar has suffered the ignominy of his car being smashed six times amounting to a loss of £5000, he has also had fireworks thrown at his window and had to watch his terrified 8 year old son dive for cover, weeping. After many other acts of terror his family have decided to move away from Bradford unable to continue challenging the inadequacy of local police and statutory authorities.

Nissar still has a fervent belief in Christianity and has described how in his darkest moments he clung to Jesus. He said:

“I felt the Lord’s presence so intimately and the Lord has come through for us in miraculous ways that we could never have imagined.  Despite the recent brutal attack outside my home, I have no doubt whatsoever that the Lord was watching over me and preserved my life as it could have been fatal. I felt His warm and glowing presence throughout the ordeal and its aftermath.”

“Over the years we have been called to re-exercise our faith and deep in faith we have forgiven our attackers.  This is what the Lord requires of us as He forgave – while He was hung on a cross He forgave those who persecuted Him.”

He challenged the church to take more seriously its duty to protect fellow Christians.  Nissar said:

“The church has to awaken and realise that the convert’s dilemma is a very grave and dire one.  The church has a moral duty to support and provide comfort for those who convert to Christianity and should so with the vigour and compassion of Christ.  It is essential churches do not cave in to fear and political correctness, because the Lord did not give us a spirit of fear but one of power, love and a sound mind.”

The British Pakistani Christian Association has been helping Nissar and his family get their lives back in order. Chairman Wilson Chowdhry who organised Nissar’s talk at Eden Christian centre and an interview with revelation TV, said:

“Nissar’s story is one of many stories of persecution faced by converts in the UK. Britain’s laws do protect against such attacks but the silence from within the Muslim community and the large number of Muslims offended by conversion, mean that existing strategies to combat such hate crime are simply not fit for purpose.  We are calling for changes to the Race and Religious Hate act 2006 to incorporate apostate protection and alterations to policing practice and policy to ensure victims are better protected.”

“Nissar has been brave travelling more than two hundred miles to share his story At Eden Christian Centre.  We hope that his message of forgiveness reaches a much wider community and that people of good conscience take up his cause in the UK and call for peace, unity and freedom.”

We will continue to do all we can to help Nissar Hussain and his family to escape this life of shocking persecution in the UK, but we can’t do it without you. Please pray and give what you can to enable them move to on to a life free from harassment and religious hatred. The family are seeking offers of temporary accommodation or help towards the costs as they have decided to relocate out of Bradford, where they find life is now untenable. They will then sell their home to fund a more permanent new home where Nissar will find employment again free from stress.

Your gift can be sent using these bank details:

Alternatively you can use the PayPal facility on the top right hand corner of our blog, our PayPal email address is info@britishpakistanichristians.org.

With your support we hope to change the lives of millions of Pakistani Christians.

Hopes for acquittal for Pakistan’s youngest blasphemy prisoner dashed by yet another lawyers strike and holidaymaking Judge! In the meanwhile threats to his life increase!

Another Taliban suicide Bomb in Pakistan

The Targeting of minority “Others” in Pakistan “Pakistan”