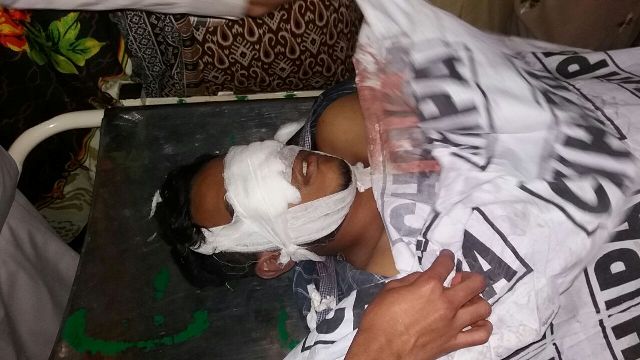 Three terrorist on two motorbikes sped into Essa Nagri Road, Quetta, on Sunday 15th April at 6pm (2pm GMT), firing at will and killing people in the streets, in an area heavily populated with Christians. Though no terrorist group has yet officially declared responsibility for the attack, evidence would suggest that this recent violence was religiously motivated, as witnesses have report that the Islamist bikers chanted the jihadist slogan “Allah Ahukbar”.

The attack is believed to have been premeditated and conducted in order to frighten Christians away from worshipping God by targeting them on Sunday when many go to church. The victims themselves were shot at indiscriminately with the attack simply attacking innocent people seemly at random in the streets, but is an area known for its particularly significant Christian community.  An attack which mirrors the recent attack in Quetta on Easter Day that killed 4 Christian revellers and critically injured a 12 year old girl who was with her father and uncles on their way to an Easter celebration in a local park where they hoped to attend a late-night-market and funfair (click here).

The location of today’s attack: Essa Nagri, is known to be an area in Quetta highly populated by Christians and hosts at least seven churches. To our knowledge there were no evening church services occurring at the time, but this would be a typical time for church services to be held. There is a population of 1800-2000 Christians living in Essa Nagri colony and the area has one point of entry which made this attack extremely easy to plan.

Pastor Adil a BPCA officer lives metres away from the area where the two men were killed and knows their families well. He described the incident and said:

“Two young men have been killed; Azhar Masih (19 yrs) who was shot through the heart, and Rajib Masih (19 yrs) who was struck by several bullets.  Both the young men were full-time students and succumbed to their injuries, dying immediately at the location of the attack. Their families are grieving and due to high security alert only family members were allowed within Military Combined Hospital, where the corpses of these two martyrs and living survivors were taken.”

Three victims are known to be injured including one man and two young girls, one girl was 9 years old and the other girl was a teenager. The names of the remaining injured victims have not been released and extent of their injuries are unknown at this time. But the teenage girl is known to be deaf-mute and would not have been able to hear any approaching commotion. The victims are all from different families and the whole community has begun to mourn their loss and is said to be deep in shock.

In the aftermath of the attack no emergency services arrived immediately and all the victims were taken to the local hospital by Christian volunteers desperate to save as many lives as possible.  Many of the volunteers are said to be in severe trauma and Pastor Adil is offering counselling and prayer to families of victims and the wider community.

Pastor Adil, BPCA representative in Quetta visited the hospital and consoled the grieving families, and says:

“The whole Christian Community is in fear. There have been several serious threats have been received by the  Christian community warning them that IS will not tolerate their worship in Quetta.  The threats are very upsetting but church attendance continues nevertheless which places us all in a very vulnerable position.

“While the Pakistani Government received billions of dollars from America they waged war on the Taliban half-heartedly. Despite huge amounts of hi-tech weaponry and sophisticated espionage and military equipment and training being received, the war on terror wages on but needs more vigour than ever before.

“We have warned the Government of Pakistan about the rise of IS in their country on behalf the numerous churches who approach us for help, fearful of warnings being received by localised IS satellites who are recruiting swathes of the country including whole communities by preaching hatred via Imam’s hell-bent on eradicating Christians and other minorities from within their midst.

“But the Government response was to simply ignore us and local police authorities simply warned churches who reported the threats that they should stop their church services as nothing could be done to protect them. It seems the police authorities were right illustrating how far Pakistan is from ever being able to uphold Article 18 of the UN Human Rights Convention that they have ratified.

“Shockingly the world ignores lack of enforcement of what legislation they have been able to pass and Pakistan has little motivation to change this demonstrable passivity in the face of IS recruitment among their citizens. Sadly democratic governments, such as the EU, the UK, Canada and the USA, while they have raised some human rights concerns, continue to praise supposed efforts and give favoured trade status to Pakistan. Such platitudes do not improve the real conditions that religious minorities are facing, and praising unimplemented paperwork reflects only the political attitude of Pilate who washed his hands of innocent blood, while giving the mob what they wanted.   (click here)

“Freedom of religious belief or conscience is a myth in Pakistan one that every day is eroded further, revealing the manifest intolerance and hatred in Pakistan towards the minority ‘other’. Quite frankly any person adhering to any faith outside of Islam is automatically a pariah or anathema.  They are deemed untouchable and evil and it has become an increasing trend to rape, kill and destroy minorities by all levels of society, as the Islamists control the populous through propaganda in an attempt to annihilate them.

“Don’t be fooled by the rhetoric the Government of Pakistan is complicit in all of this, as they have for generations been inculcating hate ideology against minorities in the national curriculum which has fomented hatred. Moreover they have set up educational, legal and employment policies and structures that oppress their minorities and make them seem as if they are worthless and worthy of eradication.”

“The two IS terrorists attacks in recent weeks have seen a change in modus operandi with attackers using motorcycles to flee the scene of the attack. As these men are not suicide attackers they can attack repeatedly and will be emboldened by their successful getaways.

“With no suspects arrested so far for each of the last two Quetta attacks my prognosis is that Christians will be targeted with increasing frequency and vigour. The safety of Christians in Pakistan has reached a nadir.”

British Pakistani Christian Association has launched an appeal to support the families affected by this recent violence.  We will provide counselling, financial support and medical treatment to those affected by today’s attack.  If you would like to donate please use one of the options listed (here)

The targeting of minority ‘others’ in Pakistan: Blasphemy