Two nurses accused of blasphemy for removing a bacteria-infested sticker 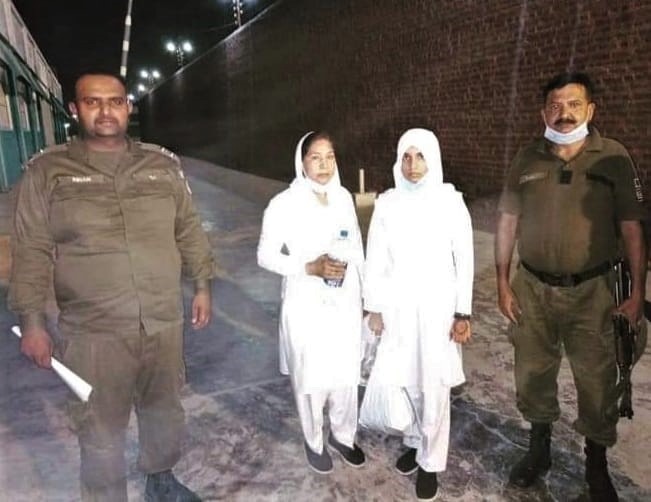 Two nurses of District Headquarters Hospital (DHQ) were arrested under the notorious blasphemy law of Pakistan despite being involved in the countries COVID-19 response.

On 9th April, an application was filed against Mariyam Laal, charge nurse and Nevish Arooj a third year student of nursing for committing blasphemy for removing a bacteria-infested sticker with sacred inscription from a cupboard they were asked to clean in a psychiatric ward.

Dr. Mirza Muhammad Ali of Civil Hospital Faisalabad, has accused both the nurses of removing the sticker with blasphemous intent. The sticker had the inscription of Darood Sharif on it (Darood Sharif is an invocation or a conventionally complimentary phrase which Muslims make after the name of the Islamic prophet Muhammad. Dr Ali has accused Nevish Arooj of removing the sticker and handing it over to Mariyam Lal to dispose of.

Dr. Mirza Muhammad Ali in his application to Civil Lines police spoke of the incident which occured on 8th April, he said:

“The allegation of a blasphemy has been proven by our medical committee.

“Mariyam Lal hid this sticker in her hands when she came across a Muslim head nurse Rukhsana. Rukhsana inquired about the concealed item but a confused Mariyam could not give any satisfactory reply.

[On 9th April 2021 First Information Report (FIR) No. 347/21 was been filed by  against the accused nurses under the section 295B of the Pakistan Penal Code]

The next morning, the head nurse Rukhsana disclosed the matter to medical Superintendent Dr Mohammed Ali and the sanitary inspector Mr Faisal Yaqoob. Dr Ali called for an inquiry committee, and members of the committee after a short discussion concluded that Two Chrstians removing an old sticker with Islamic text must have blasphemous intent.  The hospital administration then called police who took the nurse into protective custody.

Mariyam Lal in her statement to  police stated that she had been asked to clean the cupboard by the head nurse Rukhsana. While doing the job she removed the sticker which was old and collecting bacteria and with Nevish Arooj, handed it over to Rukhsana before finishing the night shift.  She has made it very clear that there was no intent to conceal any items.  She states that the next morning (9th April), the head nurse along with other staff members publicly accused Mariyam Lal and Nevish Arooj of insulting Islam by removing the sticker. Scores of protesters gathered to lynch Mariyam and Nevish fuelled by the hospital staff’s declaration of a blasphemy.

During a gathering of scores of enraged staff and onlookers in the hospital (9th April), Muhammad Waqar, a worker in the hospital pharmacy admitted his involvement in a knife attack on Mariyal Lal.  He has testified to police that he intended to kill her for committing blasphemy and was upset and disturbed that his knife only injured her arm after the blade snapped. In a video, he is heard abusing Mariyam and motivating others who were present to kill any blasphemer in the honour of Islam.

After that initial scuffle and knife attack, allegations quickly spread amongst staff and visitors to the hospital and by text and phone calls to wider friends.  This resulted in hundreds of protesters gathering at the hospital to lynch Mariyam and Nevish putting other patients at risk, creating a COVID-19 infection risk and delaying essential medical treatments and examinations.

When the two women who were brutally slapped and beaten by work colleagues and visitors to the hospital were arrested by local police. The protestors began attacking the police van in a frenzy intent on grabbing the women and lynching them publicly. The police however locked the nurses inside the van to keep them safe from the angered mob.

Muslim protesters began abusing the Government and law enforcement agencies. The melee grew to a riot of thousands forcing an escalation of security protocol and the army, anti-riot police and the police elite force were called to quell the ensuing larg-scale riots. Protestors were abusing the arrested nurses, were cursing the Christian community and shouted out Islamist slogans.  Calls were being made for the Police and Government to hand over the nurses so that an ‘appropriate’ extrajudicial lynching could take place.

The Pakistani Catholic Church has intervened to help the nurses with legal cover and protection.

“Innocent nurses involved in a clean up of drawers have been brutally attacked and accused of blasphemy and are now in fear for their lives.

“We ask Christians across the globe to pray for them.

“Their accusers are their colleagues, one of whom has tried to murder these terrified women and was thwarted only by the imperfection of his weapon.

“The fact that these women have chosen a profession that provides care to the infirm makes this whole episode very distasteful.

“Worse still when ‘educated’ doctors become the accusers and judge the innocent act of cleaning as a blasphemy, it illustrates the extent of prejudice Pak-Christians face daily.”

British Asian Christian Association, is helping many persecuted Christians in Pakistan, through raising awareness of their plight globally and providing necessary aid. If you have been moved by this account, please enable us to continue this work by donating (here)