By Editor24 December 2018No Comments 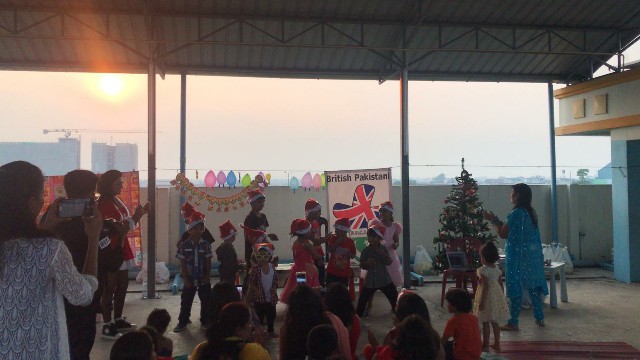 Subdued Christmas celebrations were undertaken mainly by women and children Pakistani Christian asylum seekers as their male counterparts were detained by the Thai Authorities after a crackdown on illegal over-stayers.  The arrests which have elicited widespread condemnation by the international community have left many vulnerable mothers in extremely desperate situations where they are forced to survive through the handouts from private donors and charities.

Men were noticeably in decline and virtually absent from the BPCA Christmas party this year after a crackdown by Thai Immigration police this fall, but their families gathered to celebrated Christmas in a secluded location where children had some space to roam and play.

A lit up Christmas tree was decorated and packages were placed under it before they were handled out by the honorary Santa. It was difficult to see the worried looks on the women’s face but a little relief came over them when they focused on the children’s delightful performances.


BPCA Thailand Officer Annie Ishaq reported on the festivities conducted for the asylum-seekers this year. She said:

“About 35 children attended our Christmas Party this weekend which is about 7 more than came last year. There are physical needs with many of the men still remaining in IDC, but the emotional needs are helped by coming together to celebrate despite the fear.”

“We sang Christmas songs in the Urdu language and each child took a turn entertaining their peers while their mothers proudly took photos.”

“The children know not to sing too loud, and made actions with their hands in their presentations. We are always afraid of the police coming but everyone is so happy about Christmas that we have to sing.”

“We arranged everything in a location that was out of the way and hidden away from the police. The festive atmosphere was created by decorating with colourful balloons and t he mothers served tea and ice cream as a special Christmas treat”

“BPCA gave gifts to the children – some children received a ball and other received an age-appropriate toy.”

“We also gave chocolates and distributed a food package with Indian roti flour, tea, sugar, oil, and noodles to the mothers for their families to share over the holiday.”

“Life continues through holidays and life events for these families trapped in limbo, many of whom already have UNHCR status but are forcibly separated by a draconian government policy that would rather hold their loved ones in packed cells were they run the risk of ill health.

“I hope that each and everyone of our Bangkok families received positive news on their asylum claims this year, but regardless they still need to wait for western governments to follow through by granting them asylum.”

“Others are waiting for Visa Office interviews and could be still be taken and incarcerated during a raid if they are caught even though they are at a later stage of their refugee process. There is still a huge need for private sponsorship by those in Australia and Canada.”

BPCA officer pictured here with her honorary Santas handed out chocolates and distributed a food package with Indian roti flour, tea, sugar, oil, and noodles to the mothers for their families to share over the holiday.

A sixth Christian dies in a Pakistani Jail since 2009