Suleman (13 yrs), Sonia (10 yrs) and Poonam (8 yrs) survived the beating and then burning alive of their parents before there very eyes in 2014.  Their father Shahzad Masih and his wife Shama two slaves indentured indentured under a bonded lbaour contract,  were falsely accused of blasphemy in 2014.  Before the couple could be arrested and then challenge for their acquittal in court, they were brutally murdered in the brick kilns of Kasur. Read more  (ਇੱਥੇ ਕਲਿੱਕ ਕਰੋ).

The allegations of blasphemy were made to prevent Shama from filing rape charges against the accountant of their ‘owner’.  Through the blasphemy allegations and the couples extra-judicial killing he was able to escape the justice system.  Though over 100 radicalised Muslim men were originally arrested for murdering the Christian couple, they also escaped justice (ਇੱਥੇ ਕਲਿੱਕ ਕਰੋ). 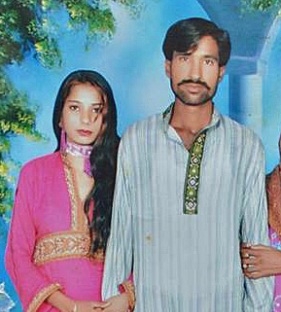 During our las visit we noticed that the family  home of Shama and Shahzad needed a refreshing of paint. The family also requested the installation of two fans for their children’s bedroom and their living area because using the computers we bought with your donations (ਇੱਥੇ ਕਲਿੱਕ ਕਰੋ) created excessive heat in an already hot climate.

We have been paying for a full time live-in nanny since 2014. The latest nanny has been in position for over 4 years and is as close to a replacement mother as these children will ever know.  Sustaining her costs has  been one of our priorities since Shama and Shahzad were killed.  If you are moved by this story and would like to support these orphans and their grandfather you can donate (ਇਥੇ).