By admin24 November 2021No Comments 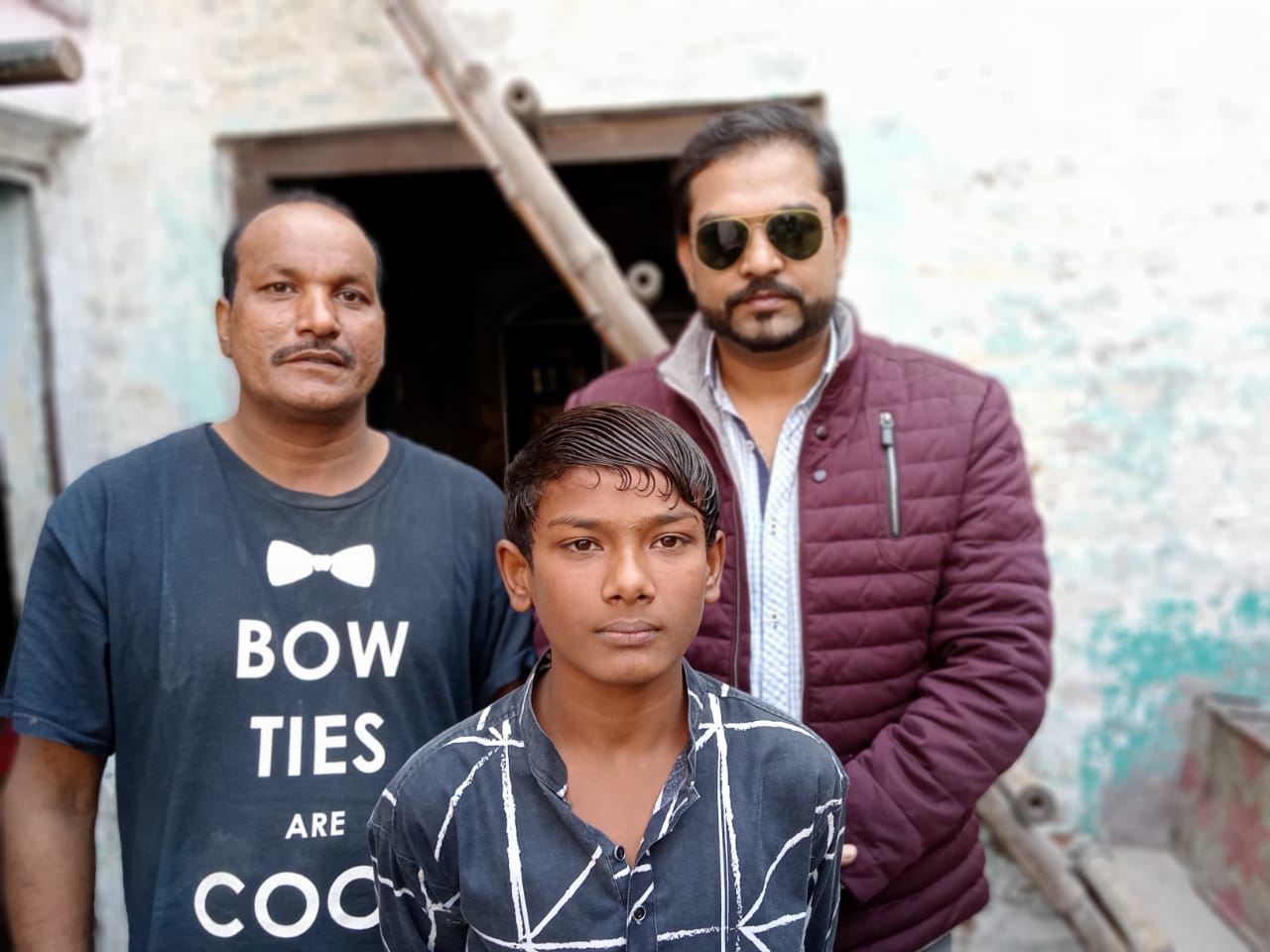 The mother of a murdered 10 year old who we supported for two years died of grief from being coerced into a compromise agreement for her murdered son.

Badil Masih was sodomised and murdered by his employer Mr Mohammed Ikram and a cohort, in July 2019, for daring to seek full payment for work he had carried out at a scrapyard (click here).

British Asian Christian Association stepped in to pay for legal costs, and support the family financially as they challenged for justice.  Despite clear evidence of a crime courts offered pre-arrest bail to the murderers who began to threaten the Christian family and key witnesses (click here).

Though Badil’s mother  Shareefa remained stoic throughout the court process.  The witnesses were nobbled by the murderers and their cohorts.  The witnesses refused to testify and threatened to alter their statement if Shareefa continued to pursue justice.  It is not known whether they succumbed to bribes, threats or both (click here).

In tandem with the ignominy of losing witnesses Shareefa suffered intensified threats of the murder of her remaining son. Unbeknown to British Asian Christian Association or our solicitor, Shareefa met in private with the opponent solicitor  and agreed compensation terms for the murder of her son (click here).

Shareefa Bibi (32 yrs at the time) was  earning 3500 Pak-rupees every month working as a housemaid and was finding it difficult to meet the needs of her family.

Badil Masih (10 yrs) was a caring and pragmatic child.  he took up work clearing a scrapyard for a wealthy Muslim businessman in July 2019 during his school summer holidays, to help the family sustain their rent and daily need for food.  At first his mother refused to let him work but Badil insisted and without a father figure in he home Shareefa acquiesced. It should be noted that Badil’s father some years earlier had left the home through depression and a severe drug-habit.

Video of Shareefa Bibi in 2019 explaining about the day her son was killed.

Badil worked extraordinary hours starting at 9am and not finishing till earliest 6pm.  The work was arduous and Badil complained about tiredness but really wanted to help his family.  Though Shareefa insisted he spend the money on himself he declined and used the money towards groceries and household needs.  From all accounts, he was a loving, caring child who never missed church despite his difficult employment.

Badil was not paid his full wages and took this matter up with his employers.  That same day he was sodomised, beaten and then left unconscious at his mothers doorstep.  His younger brother Soojal aka Moon saw the chase and heard some of the beating as he was helping his brother that day.  Read more (here)

British Asian Christian Association stepped in to pay for the funeral of Badil, we also supported the family financially and began a legal pursuit for justice.

Phenomenal court delays coupled with pre-arrest bails for murderers that are inexorably granted when a Muslim is a defendant against a Christian, led to the loss of key witnesses.  An increasingly bleak looking prospect of success with the murder trial shook Shareefa to the core.  By now she was exhibiting signs of deep depression, anxiety and Post-Traumatic Stress Disorder (PTSD).

In March 2021, Shareefa called British Asian Christian Association, in the time between court hearings and told us she had agreed compromise terms with the murderers of her son. At the time the agreement had allowed for 3.5 Lakh Pak-rupees (300,000 Pak-rupees equivalent to £1282) and a small 1.5 Marla (25 metres squared) plot of land.  Shareefa advised us that she had already made a statement in court exonerating the murderers through Pakistan’s Qisas and Diyat laws (click here).  These are Islamic laws set in the Koran (otherwise known as Sharia Law) that allow wealthy Muslims to subvert convictions for murder and rape pay paying a compromise bribe. At the time Shareefa Bibi, said:

“In the court the witnesses refused to accept that they had seen the murderers beat the head of Badil with a metal rod.

Mr Akram and his cohorts have been bullying me to accept, they said they would kill my remaining son Moon if I did not accept their offer.

“The murderers were telling me that they were wealthy and would win in court, that I would then be made to pay.

“Police forensics failed to implicate the murderers – I was left with no option.

“I went to the meet the solicitor on my own, though I was scared the whole time that they would kill me.

“I just wanted Moon to be safe and to have a better life.

“I am so sick and depressed now.

“I feel I have betrayed Badil but Moon is still alive and I could not take another death.”

Many courts in Pakistan especially with staunch Muslim Judges prefer this way of dealing with legal matters involving Christians.  The use of Sharia over constitutional laws is deemed more spiritually sound and ritually pure. To enable parties to discuss options judges postpone and delay court hearings.  This inevitably allows wealthy Muslims to threaten or seduce poverty-stricken and vulnerable Christians into out-of-court settlements.  It is the greatest legal tragedy in Pakistan and the reason that rape and murder is so ubiquitous.

Sharifa Bibi explained to us at this point that she had not received her payment a week after she had testified in court that she no longer would pursue her murderers.  She asked us to intervene as she wanted to use the money to support Moon and would use some of the money to educate him and part of it to move away from the area.  She also asked for us to negotiate a change to the compensatory land for cash, as she did not want any ties to the village she was currently living in.

Our solicitor negotiated on her behalf had the offer altered to a compensation amount of 400,000 Pak-rupees (£1708).  In May we negotiated a first payment of 200,000 Pak-rupees (£854) but on receipt of the money, the heartache of accepting the payment had a visible effect on Shareefa.   Sultan Masih, her brother explained:

“It was clear she was entering a period of deep depression.

“She was already suffering from severe diabetes and the effect of depression and guilt eventually led to her death within a week of the payment.”

For a week Shareefa remained in serious condition and was on medication prescribed from a local doctor. Her health condition worsened on the afternoon of 16th May 2021, when she complained of pain in her chest. Around 5:00 pm when Sultan Masih returned home from his work, Shareefa Bibi was taken to Government General Hospital, Ghulam Muhammad Abad, Faisalabad.  On arrival she was declared dead by medical staff, which is mentioned in the death certificate issued by Dr. Qur-Tul-Ain Tariq.  Shareefa Bibi died of a cardiac arrest at a very young age of 35.  Grief is a known trigger for cardiac arrest (click here). 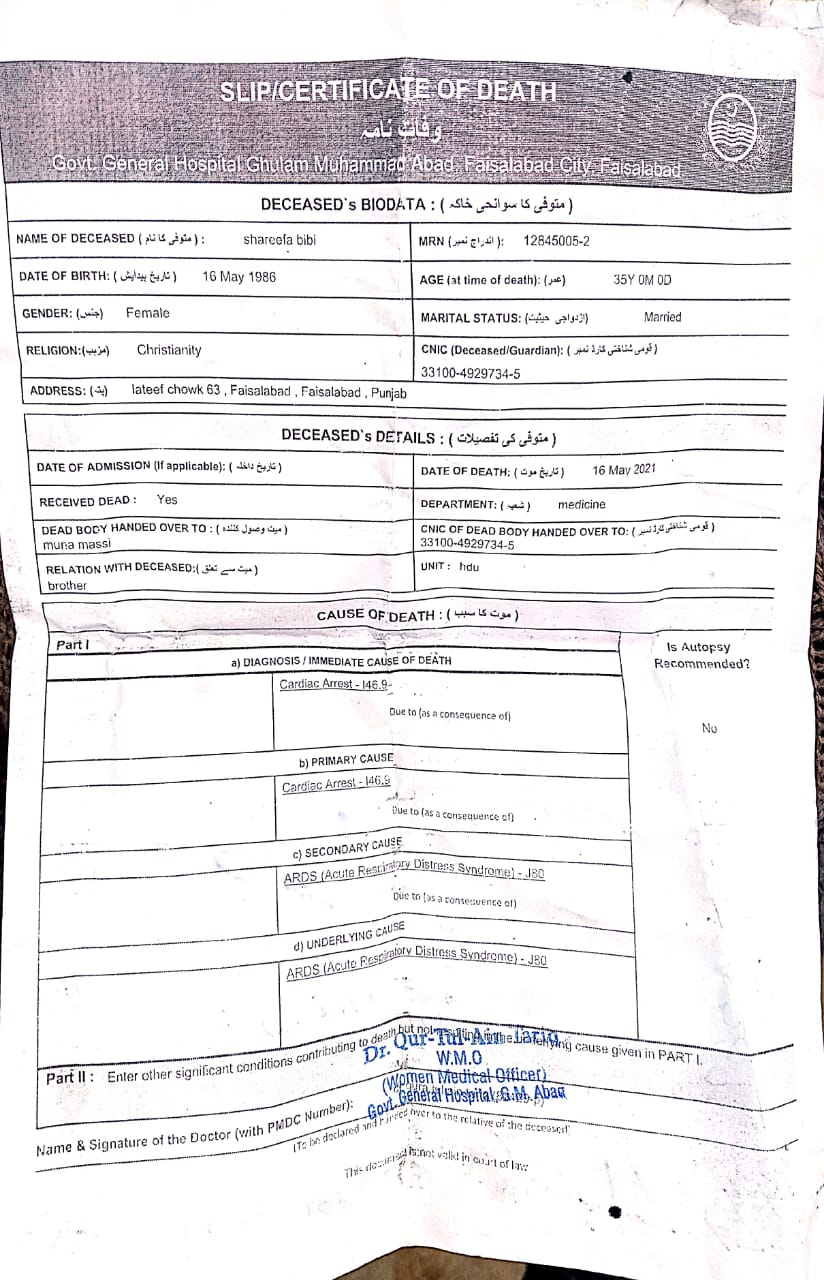 Shareefa’s death resulted in Soojal being cared for by his uncles from both the paternal and maternal side in a shared guardianship.  British Asian Christian Association covered the cost of her funeral.  We lost contact for a while as the family ostensibly mourned Shareefa and wanted some privacy.

Soojal Masih was taken by his uncle Faisal Masih (paternal uncle) who lives in Gujranwala he did not allow us an opportunity to meet with Soojal.  Soojal lived there for sometime but last month was sent back to the house of his uncle Sultan Masih, brother of Shareefa Bibi.  Sultan Masih has informed us that Faisal Masih relinquished responsibility for Soojal after collecting the compensation funds.  He has claimed to have bought some land as a future investment for Soojal. So far no paperwork has been provided to verify this.

In October, we visited Soojal to see how he was coping since the loss of his mother.  We have discovered that Soojal is well but he has been living a transient life moving from home to home between his uncles. He does seem happy overall (but we have not been able to meet him in private). Soojal does not attend any school because of the moving around and because Sultan does not even send his own children to school.

“I would like to go to school again, all my friends go to one.

“My mum wanted me to be educated so I could get a good job and escape poverty.

“It has not happened yet but I hope something is done.”

The second compensatory amount to be paid for Soojal was never received.  Moreover, the solicitor for the murderers has stated that it will not be paid as the amount was due to now deceased Shareefa.  We have tried to reenact our solicitor to retrieve the amount but he explained to us that the work he undertook to arrange the compensation was a voluntary complimentary gift, because of the tragedy that had befallen poor Shareefa.

To take this compensatory amount to court would not be an easy process and has a limited chance of success.  the charges for the service would exceed the value of the amount to be retrieved.  It is not a viable option. Our Operations Manager has agreed to contact Mr Ikram directly and to appeal to his better nature for the funds to be given to the younger son in a trust.

“Soojal lives with us sometimes.

“He does not go to school because he moves around homes.

“We care him like on of our own children, when he is with us.

“We try do everything in our means, so that he does not feel the absence of his parents.”

Soojal, also spoke with our officers, he said:

“I miss my mother.

“My mother used to buy clothes for me she would give me money and hug me when I needed it.

“I have not met with my father since my mother died, no-one even knows his whereabouts.

Sultan Masih, confirmed that the whereabouts of the father is unknown, he said:

“We don’t know where Soojal’s father is.

“He is an addict that takes drugs through injections and began living on the streets many years ago – he may not even be alive now.

“Since our sister died Soojal has become our memory of her, he looks much like my beautiful sister.

“We cherish the time we spend with him.”

We have spoken with Sultan and asked if he would allow Soojal to attend a boarding school if we can raise the funds to educate him there.  The Pakistan Adventist College and Seminary in Farooqabad would give Soojal the opportunity to gain a better understanding of Christianity, as well as receive a top class education.  This would fulfil the desires of his deceased mother and bring another Christian out of abject poverty and dire persecution.  This would also prevent Sultan from putting Soojal to work which would be a current desire.  Sultan has agreed to allow us to do this if we can raise the funds.   To make this happen we need to be able to raise the amount of £200 per month.  If you have been moved by this story and would like to contribute, then please (click here).

UKBA – a question of credibility part 1