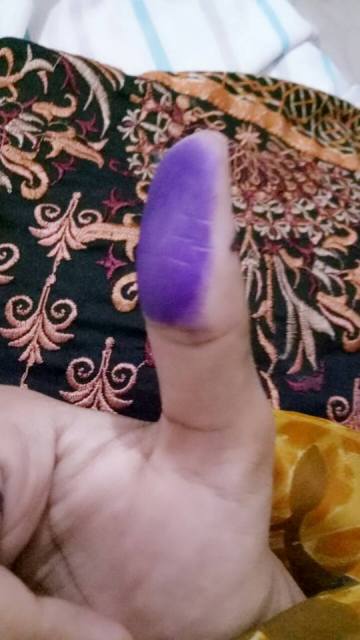 Ink stains the thumb of a Pakistani voter – voting by thumb print is a system that allows corruption .

Former cricketer Imran Khan is declaring his party – Pakistan Tehreek-e-Insaf has the right to form the new government in his nation’s 2018 national election. Christians are bracing for a season of no representation under a government that has vowed to protect blasphemy legislation 295C at the expense of the both the citizens and the constitution of Pakistan. The election results were pending because of allegations of vote-rigging but the leading party is one whose leader has vowed to uphold 295C the draconian blasphemy law (click here). Pakistani Christians are very concerned about the fact they have not been allowed even one candidate in any of the available parties presently in the National Assembly. Demonstrations were held to underscore their concerns about being underrepresented but Pak-Christians were also clear in expressing that they were not against any particular community.

Pakistan’s federal election campaign this year was charged with violence and riddled with controversy, including a terrorist attack on July 13 that killed nearly 150 people for which IS claimed responsibility, and the arrest of Prime Minister Nawaz Sharif who was ousted for alleged corruption. The election was a close race between the Sharifs’ Pakistan Muslim League (Nawaz), whose brother Shehbaz is now leading the party, and Imran Khan’s Pakistan-Tehreek-e-Insaf with the Bilawal Bhutto Zardari’s Pakistan Peoples Party sometimes being instrumental in the formation of the government when there is no clear majority.

There have been registered concerns about election tampering as it is likely impossible for any new government to successfully finish a term in office without the support of the Military establishment. A Pakistani prime minister has yet to completed their full term and should there be a change in party this would be the second civilian transfer of power in its 71-year history initiated at the polls, so a peaceful transition of power is a remarkable event. However, there has been rise in radical Islamist participating in the general election and many politicians are expressing endorsement of Pakistan’s controversial law on blasphemy, which carries the death penalty and which has allowed for the prosecution of anyone deemed to offend Islam. It is well documented that witnesses in such prosecutions do not have to be present to attest that a crime has been committed and frenzied mobs often render their own judgement on individuals and their associated neighbours or populations before an actual charge can be confirmed based on an accuser’s questionable testimony.

Raza Ahmad Rumi, A political analyst and visiting scholar at Cornell University, taking a more tentative approach suggested in a CBN interview with reporter George Thomas that though there are legitimate concerns by minorities about mainstreaming these radical groups, having them participate in the democratic process may be a strategy deemed by the military establishment as an effect way of managing them and subjecting them to the rule of law. He described this as being one of Pakistani democracy’s ” teething problems” and questions related to democratic implementation as ” complicated”. (click here)

As the anticipation of the election results mounted BPCA volunteer Shahaan spoke with Wilson Chowdhry, he said:

“It is assumed that the voter turn out of Christians will be diminished, nevertheless most of the Christian Community is still supporting PML N which is ousted Prime Minister Nawaz Sharif’s party by and large in the Punjab. Pakistan Tehreek-e-Insaf is favoured to win the election but will not be able to get the Christian vote, because of his staunch defence of 295C which he says in his speeches he will support and protect should he come to power.

“Because of this hard-line rhetoric surrounding the blasphemy legislation Tareek-e-Insaf has gained support in the country leaving Christians insecure and doubtful about the protection of their rights should party leader Imran Khan form the government. A surprising factor contributing to this anxiety is the participation of hardcore Muslim extremist groups in the elections who are involved in Tehreek e Labaik.

“This is the party of Moulana Khadim Hussain Rizwi who praised Mumtaz Qadri the murderer of former governor Salman Taseer and a who also is an ardent support of 295C. They have already raised 150 candidates.

“The states concessions to these extremists brings a big question mark to the vision of Pakistan founder, Jinnah, who clearly espoused a Pakistan that would be a welfare state where every religion would have their freedom of religion and lives protected.

“Almost one hour is left and the voting stations will be closed by 7pm in the evening with the results coming soon. Imran Khan will likely form the government as according to surveys he is favoured to win.

These elections have seen the suppression of media and allegations that the military has been involved with vote rigging, however it could also be that media outlets self-censor because Pakistan does not have unrestricted free speech – especially with laws like 295C. 172 seats are required for any party to form a Government and PTI has 115 seats followed by the Pakistan Muslim League with 62 and the Paksiatn’s Peoples Party with 43. (click here) The incumbent party is protesting the election results that name Imran Khan’s party as having the clear majority. Imran Khan, the apparent winner was also noted and praised for his measured response to the results. (click here)

In November 2017 our BPCA outreach worker Leighton Medley and his wife saw the emergence of the new far right when they became caught up in the chaos caused when a radical mob brought the capital city to a virtual standstill for over three weeks. (click here)

Under the leadership of cleric Khadim Hussain Rizwi demands were made that circumnavigated the rule of law and the State bowing to every one of them also dropped all the charges of those protesters who were arrested for violence and vandalism. Not only did the State bow down to the most radical of demands put forward by the protesters, they were also assured that all cases against them would be dropped. It was a harbinger of the new radical far right in Pakistani politics when Rizwi and his supporter had took to the streets against an slight amendment made to the Elections Act 2017 and demonstrates the aggressive approach they will use to deal with whoever they find raising a voice for the rights of the persecuted and minority communities. (click here)

“Not only Pakistani Christians, but Sikhs and Ahmadis may be negatively impacted by these election results.

“Of the Muslim population Shiites represent 15 to 20 percent, but Sunni extremists have vowed to rid Pakistan of these adherents of what they historically consider an incorrect version of Islam.

“What kind of environment will this be for Christians who despite being a mere 1.6% of the population already account for 15 % of the blasphemy charges? The lack of representation is sure to produce anxiety in a great many Christians, but there are also other responses which encapsulates the respect and hope the Pak-Christian community still carry for their government.

“As one young woman put it, ‘Imran Khan has become Prime Minister [I’m] praying that he may bring positive change to Pakistan. People…sometimes…make statements to get votes of the majority. Let’s just pray God changes his heart and blasphemy laws will be diminished from the country.’

“There is wisdom in this approach that does not deny the very real circumstances, but firmly puts faith in God within them and allows us to smile at the future despite the difficulties. We must remember to pray for Pakistan and against the many adversities and discouragements remain hopeful about our future.”

If you would like to donate to the British Pakistani Christian Association to help with legal expenses for Christians in Pakistan. Please contact us if you have an interest in contributing in this way by designating your donation to LOVE AND JUSTICE which is the legal defense fund we are establishing to help with legal expenses and associated costs.

“Strength and honour are her clothing and she shall rejoice in time to come.” Proverbs 31:25

A marker pen mark lines the top part of several voters’ thumbs just below the nail line.  This is the only prevention of a repeat vote and can be easily removed to enable a repeat vote.  Pakistan desperately needs to review its voting mechanism to create a robust system that eradicates or at least reduces vote rigging.

Launch of the final report of FCO support for persecuted Christians