By Editor14 January 2023No Comments 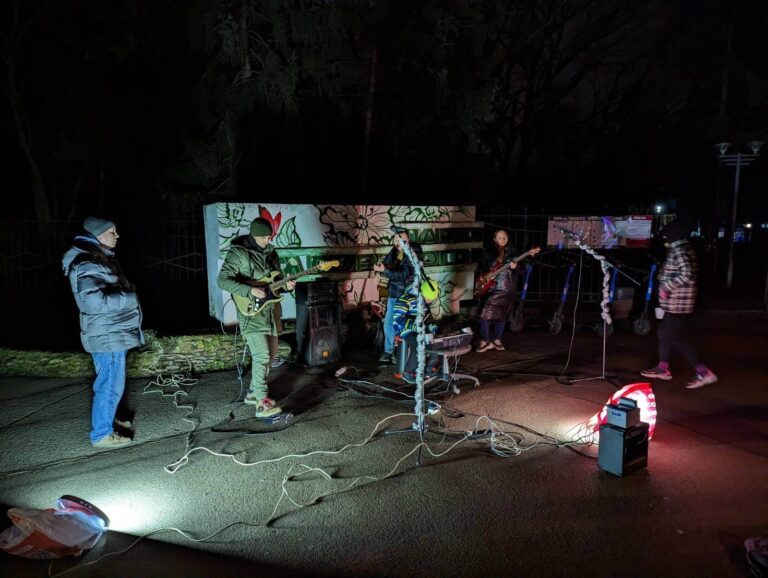 The people of Odessa and other cities in Ukraine were plunged into darkness from 11th December, after a large scale Russian drone attack targeted energy infrastructure.  This left 1.5 million people without electricity.  Read more (here)

We informed you earlier of how Pastor Vasilev had been continuing his church services and outreach despite an earlier power deficit, using petrol generators, car batteries and inverters (click here).

The latest attacks seem to have little effect in stopping Ukrainians celebrating Christmas, even amidst the shelling of their cities.

President Putin ordered a ceasefire from 6th January to 7th January,  so Russians and Ukrainians could celebrate the Orthodox Church Christmas in peace but later he reneged on his promise. Read more (here).

British Asian Christian Association has been providing a regular gift to a church in Ukraine since the outbreak of war with Russia on 24th February 2022 (click here).

In July 2022 we shared details of how Pastor Vasilevwas running daily services to reach souls, during unceasing war in Ukraine (click here).

Christians throughout Ukraine celebrated Christmas as best they could, despite several attacks from Russia, even after Putin ordered a unilateral ceasefire for the Orthodox Christmas, on 6th – 7th January 2023.

When the ceasefire was announced Ukrainian officials decried what felt like an opportunity to regroup rather than a real desire, to reflect on the peace brought to earth through Jesus Christ.

Pastor Vasilev, spoke about how most Ukrainians felt about the ceasefire, he said:

“The idea of ceasefire had a negative reaction here.

“So it sounded like, ‘Let our soldiers take a break from killing you and go to church.

“After that we will get back to killing you”

Pastor Vasilev expressed his deep disappointment that the Patriarch of the Russian Orthdox Church, had not condemned the war, but had spoken in favour of it as a holy war against the morally corrupt (click here).  Patriarch Kirill of Moscow’s actions have created a split in the Orthodox Church, which has also resulted in many Ukrainians celebrating Christmas in line with the Gregorian calendar, as is common in the west (click here).

Most cities had been plunged into darkness on 11th December, two days after our last post on the war, but Ukrainians have been preparing well and have been using petrol generators, car batteries with invertors and candles to continue having light and heating.  Though suffering an extremely cold winter by wearing heavier and warmer night clothes, heating powered by generators and wood fires, these communities have been able to survive.

Local businesses, have suffered economically but this did not stop them decorating their shops with Christmas lights, and decorations, as they tried to maintain morale during this important Christian festival.  Families travelled to city centres at risk to their lives, to enjoy what little lights were available to see in extremely dark streets.

Pastor Vasilev, explained that families did their best to celebrate Christmas but often had no power at home.  He shared an image of the Christmas period where his family were having to light the dining room with candles on the table.

On 25th December 2022, Pastor Vasilev held a Christmas service and meal.  He shared some comments on how it went, explaining about participation of newly saved Christians, for the first time.  He said:

“On December 25th, we had a church service with two ladies who began to attend church after receiving help.

“After the evening service we went to a café and had a good time of fellowship.

“That woman’s husband has problems with alcohol so she and her grandson celebrated New Year’s day with us. We celebrated it in the church until 10:30pm to be home before the curfews.”

The shelling of Ukraine during the entire Christmas period made leaving the home a dangerous mission, especially when going into the main city downtown area. However, Pastor Vasilev was adamant to reach the unsaved in Odessa to share the hope of the Gospel. On both the 6th and 7th of January 2023 live concerts were held by the Church team of volunteers in downtown Odessa.

VIDEO:  It was extremely cold but during the Traditional days of Orthodox Christmas, Pastor Vasilev’s daughter shared her testimony.

Psstor Vasilev, shared details of the concert, he said:

“Since it wasn’t very cold, we had two outdoor concerts on Jan 6th and 7th.

“We sang some Christmas songs and reminded people about the meaning of Christmas.

“There weren’t many people since it wasn’t very warm either and many people stayed at home with their families.

“We handed out almost all our food bags, however.”

Pastor Vasilev shared details about a church in Kherson, that needed help with food other items (click here). Because we only raised enough to send £500 last month Pastor Vasilev has decided to reduce the aid he gives in Odessa for this month and provide support in Kherson, were the situation is worse.  Pastor Vasilev, said:

“I talked to the Christian man in Kherson yesterday (10th January).

“He said the Russian army shoot and bomb without aiming at military people.

“So many blocks-of-flats are partially destroyed and there are casualties all the time.

“A hospital and a hospital for pregnant women were destroyed.

“They used phosphoric weapons as well, which are prohibited.”

“Yesterday I sent a half of the amount [£500 relief aid] to him, told him how and what we do and what he needs to do [regarding record keeping and evidence of aid work].

“I am keeping the other half because now I want him to estimate the amount of people they can help and depending on how things go I will either send him more of use this money here.”

We want people to understand that giving the aid to the church in Kherson, does not in anyway mean it is not needed in Odessa.  However, Past0r Vasilev and his Church committee felt that the Kherson Church required the aid more this month, due to the regularity of your help.  Most people in Kherson have no or little income, businesses were destroyed or became financially inviable. Business owners have been killed by the shelling of of the city in anger of the necessary Russian withdrawal. Families have little savings if any and food is becoming scarce because of normal port and trade issues associated with war – pushing prices for simple food items up.

British Asian Christian Association do want to increase our provision to Ukraine, but can only do this with your help.  If you have been moved by this story and would like to donate to our assistance packages to two churches in Ukraine, then please (click here).

“The war in Ukraine shows little sign of ending any time soon.

“Casualties and fatalities increase but Pastor Vasilev himself a Russian citizen has decided to stay on in Ukraine to serve God’s calling.

“His work is providing a real-term understanding of the difficulties faced by citizens of Ukraine.

“People are in desperate need of food  and warm clothes.

We hope that our supporters react to this report and help us develop a more sizeable support package for a growing number of needy beneficiaries.

“Christmas was difficult for families in Ukraine.

“I can’t imagine how children comprehend what is going on.

“Nevertheless, despite the lack of electricity and power and many other vicissitudes of war , Ukrainian’s decided to celebrate Christ’s birth.

“History was made when Ukrainians joined the western world and celebrated on the same day (25th December) as them for the first time ever.

“From all the accounts we have heard believers put aside their fears and simply worshipped and reveled, in the hope that Jesus’ birth over 2000 years ago, brought to this earth.

“May God end this war soon and heal the rift between two nations that has caused so much devastation.”

Christian Slum area of Islamabad hit by floods – families are in desperate need of assistance.

Christian homes ravaged by the floods. Desperate Christians living in the slum area of G-7/3 Islamabad…